Cross-section view of calcium carbonate crystal fans that grew on the seafloor circa 2.6 billion years ago. (Credit: Jess Adkins/Caltech) 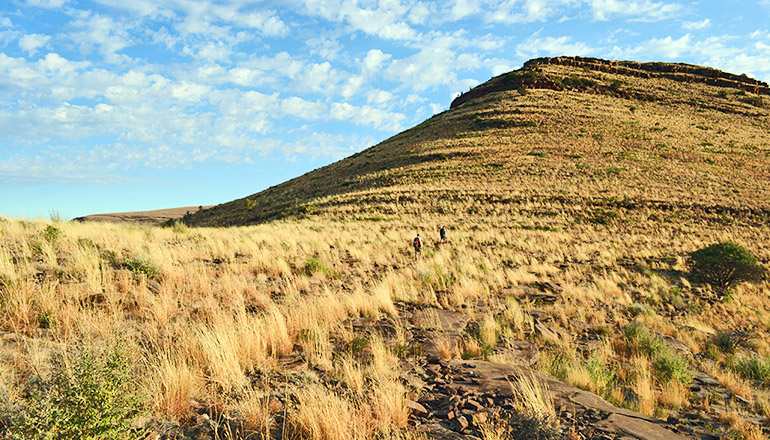 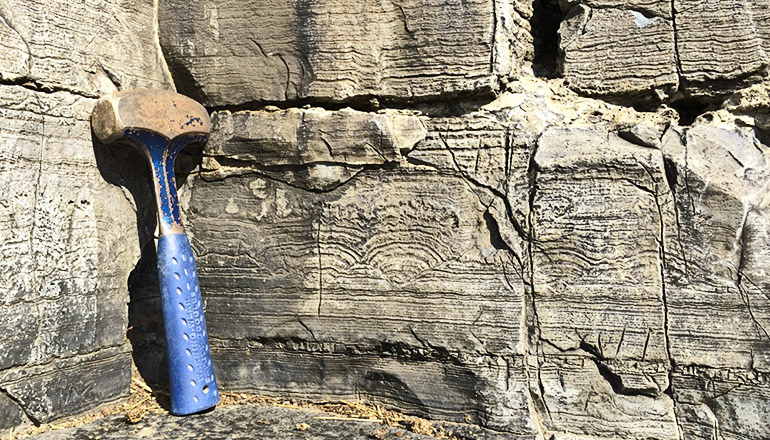 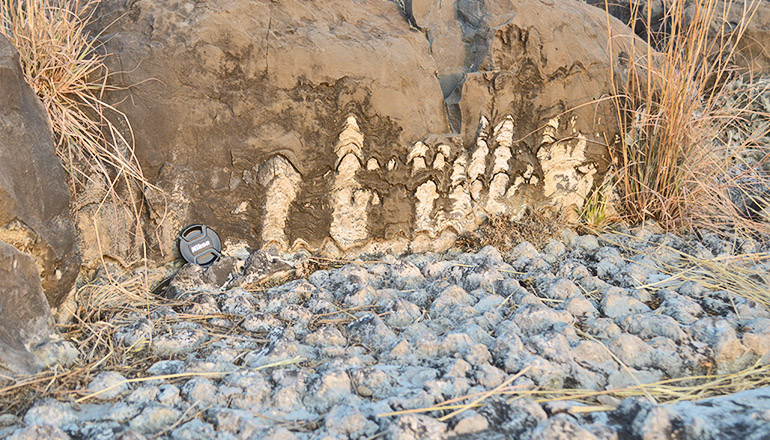 Scientists believe that until about 2.4 billion years ago there was little oxygen in the atmosphere—an idea that has important implications for the evolution of life on Earth.

Evidence in support of this hypothesis comes from studies of sulfur isotopes preserved in the rock record. But the sulfur isotope story has been uncertain because of the lack of key information that has now been provided by a new analytical technique.

The story that new information reveals, however, is not what most scientists had expected.

“We used it to make measurements of sulfate groups dissolved in carbonate minerals deposited in the ocean more than 2.4 billion years ago, and those measurements show that we have been thinking about this part of the sulfur cycle and sulfur isotopes incorrectly.”

The team describes their results in the journal Science.

Nearly 15 years ago, a team of geochemists led by researchers at UC San Diego discovered there was something peculiar about the sulfur isotope content of rocks from the Archean era, an interval that lasted from 3.8 billion to about 2.4 billion years ago. In those ancient rocks, the geologists were analyzing the abundances of stable isotopes of sulfur.

This process is called mass-dependent fractionation, and, scientists have found that it dominates in virtually all sulfur processes operating on Earth’s surface for the last 2.4 billion years.

However, in older rocks from the Archean era (i.e., older than 2.4 billion years), the relative abundances of sulfur isotopes do not follow the same mass-related pattern, but instead show relative enrichments or deficiencies of 33S relative to 34S. They are said to be the product of mass-independent fractionation (MIF).

The widely accepted explanation for the occurrence of MIF is as follows. Billions of years ago, volcanism was extremely active on Earth, and all those volcanoes spewed sulfur dioxide high into the atmosphere.

At that time, oxygen existed at very low levels in the atmosphere, and therefore ozone, which is produced when ultraviolet radiation strikes oxygen, was also lacking.

Today, ozone prevents ultraviolet light from reaching sulfur dioxide with the energy needed to fractionate sulfur, but on the early Earth, that was not the case, and MIF is the result. Researchers have been able to reproduce this effect in the lab by shining lasers onto sulfur dioxide and producing MIF.

Geologists have also measured the sulfur isotopic composition of sedimentary rocks dating to the Archean era, and found that sulfides—sulfur-bearing compounds such as pyrite (FeS2)—include more 33S than would be expected based on normal mass-dependent processes. But if those minerals are enriched in 33S, other minerals must be correspondingly lacking in the isotope.

According to the leading hypothesis, those 33S-deficient minerals should be sulfates—oxidized sulfur-bearing compounds—that were deposited in the Archean ocean.

“That idea was put forward on the basis of experiment. To test the hypothesis, you’d need to check the isotope ratios in sulfate salts (minerals such as gypsum), but those don’t really exist in the Archean rock record since there was very little oxygen around,” explains Woody Fischer, professor of geobiology at Caltech and a coauthor on the new paper. “But there are trace amounts of sulfate that got trapped in carbonate minerals in seawater.”

However, because those sulfates are present in such small amounts, no one has been able to measure well their isotopic composition. But using a device known as a multicollector inductively-coupled mass spectrometer to precisely measure multiple sulfur isotopes, Adkins and his colleague Alex Sessions, a professor of geobiology, developed a method that is sensitive enough to measure the isotopic composition of about 10 nanomoles of sulfate in just a few tens of milligrams of carbonate material.

The authors used the method to measure the sulfate content of carbonates from an ancient carbonate platform preserved in present-day South Africa, an ancient version of the depositional environments found in the Bahamas today.

Analyzing the samples, which spanned 70 million years and a variety of marine environments, the researchers found exactly the opposite of what had been predicted: the sulfates were actually enriched by 33S rather than lacking in it.

What does this mean for the atmospheric conditions of the early Earth?

“Our findings underscore that the oxygen concentrations in the early atmosphere could have been incredibly low,” Fischer says.

Knowledge of sulfate isotopes changes how we understand the role of biology in the sulfur cycle, he adds. Indeed, the fact that the sulfates from this time period have the same isotopic composition as sulfide minerals suggests that the sulfides may be the product of microbial processes that reduced seawater sulfate to sulfide (which later precipitated in sediments in the form of pyrite).

Previously, scientists thought that all of the isotope fractionation could be explained by inorganic processes alone.

Could other stuff replace blood transfusions for anemia?