U. CHICAGO (US) — Astronomers are beginning to unravel the modern mystery of dark energy based on data from the South Pole Telescope.

Recent analysis offers new support for the widely accepted explanation of dark energy, the source of the mysterious force that is responsible for the accelerating expansion of the universe.

The results also are beginning to home in on the masses of the neutrinos, the most abundant particles in the universe, which until recently were thought to be without mass.

The data strongly support Albert Einstein’s cosmological constant—a slight modification to his general theory of relativity and the leading model for dark energy— even though the analysis was based on only a fraction of the South Pole Telescope (SPT) data collected and only 100 of the more than 500 galaxy clusters detected so far. 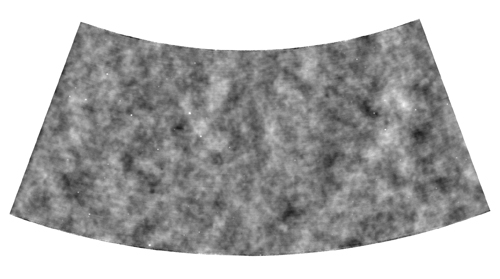 This image displays a portion of the South Pole Telescope survey of the cosmic microwave background (CMB), the light left over from the Big Bang. The variations in the image are tiny fluctuations in the intensity of the CMB. The fluctuations are caused by differences in the distribution of matter in the early universe at a time only 400,000 years after the Big Bang. The image is effectively a “baby” picture of the universe. (Credit: SPT Collaboration)

“With the full SPT data set we will be able to place extremely tight constraints on dark energy and possibly determine the mass of the neutrinos,” says Bradford Benson, a postdoctoral scientist at the University of Chicago’s Kavli Institute for Cosmological Physics.

The results are based on a new method that combines measurements taken by the SPT and X-ray satellites, and extends these measurements to larger distances than previously achieved using galaxy clusters.

The most widely accepted property of dark energy is that it leads to a pervasive force acting everywhere and at all times in the universe. This force could be the manifestation of Einstein’s cosmological constant, which effectively assigns energy to empty space, even when it is free of matter and radiation.

Einstein introduced the cosmological constant into his theory of general relativity to accommodate a stationary universe, the dominant idea of his day. He later considered it to be his greatest blunder after the discovery of an expanding universe.

In the late 1990s, astronomers discovered that the expansion of the universe appeared to be accelerating according to cosmic distance measurements based on the brightness of exploding stars. Gravity should have been slowing the expansion, but instead it was speeding up.

Einstein’s cosmological constant is one explanation of the observed acceleration of the expanding universe, now supported by countless astronomical observations. Others hypothesize that gravity could operate differently on the largest scales of the universe. In either case, the astronomical measurements are pointing to new physics that has yet to be understood.

“The results released to date are just the beginning of what we’ll be able to accomplish with the South Pole Telescope—the present analyses are based on only 100 of the over 500 galaxy clusters we’ve detected so far. We can expect much tighter constraints on dark energy and the neutrino masses with the full data set,” says McGill University physics professor Gil Holder.

McGill professor Matt Dobbs, postdoctoral scientist Keith Vanderlinde, and graduate student Tijmen de Haan recently returned from the geographic South Pole after having installed on the telescope a new detector readout system, developed and built at McGill, the only Canadian university partner in the project.

This electronics system, together with new detector technology, will allow the telescope to search for signatures produced a fraction of a second after the big bang, and refine the measurements of matter and neutrino properties.

The SPT was specifically designed to tackle the dark energy mystery. The 10-meter telescope operates at millimeter wavelengths to make high-resolution images of the cosmic microwave background (CMB), the light left over from the big bang.

Scientists use the CMB in their search for distant, massive galaxy clusters that can be used to pinpoint the mass of the neutrino and the properties of dark energy.

“The CMB is literally an image of the universe when it was only 400,000 years old, from a time before the first planets, stars, and galaxies formed in the universe,” Benson says.

“The CMB has travelled across the entire observable universe, for almost 14 billion years, and during its journey is imprinted with information regarding both the content and evolution of the universe.”

As the CMB passes through galaxy clusters, the clusters effectively leave “shadows” that allow astronomers to identify the most massive clusters in the universe, nearly independent of their distance.

“Clusters of galaxies are the most massive, rare objects in the universe, and therefore they can be effective probes to study physics on the largest scales of the universe,” says John Carlstrom, a professor in astronomy and astrophysics, who heads the SPT collaboration.

“The unsurpassed sensitivity and resolution of the CMB maps produced with the South Pole Telescope provides the most detailed view of the young universe and allows us to find all the massive clusters in the distant universe,” says Christian Reichardt, a postdoctoral researcher at the University of California, Berkeley, and lead author of the new SPT cluster catalog paper.

The number of clusters that formed over the history of the universe is sensitive to the mass of the neutrinos and the influence of dark energy on the growth of cosmic structures.

“Neutrinos are amongst the most abundant particles in the universe,” Benson says.

“About one trillion neutrinos pass through us each second, though you would hardly notice them because they rarely interact with ‘normal’ matter.”

The existence of neutrinos was proposed in 1930. They were first detected 25 years later, but their exact mass remains unknown. If they are too massive they would significantly affect the formation of galaxies and galaxy clusters, Benson says.

The SPT team has now placed tight limits on the neutrino masses, yielding a value that approaches predictions stemming from particle physics measurements.

“It is astounding how SPT measurements of the largest structures in the universe lead to new insights on the evasive neutrinos,” says Lloyd Knox, professor of physics at the University of California, Davis and member of the SPT collaboration. Knox will also highlight the neutrino results in his presentation on Neutrinos in Cosmology at a special session of the APS on April 3.

The SPT is funded primarily by the National Science Foundation’s Office of Polar Programs. Partial support is also provided by the NSF-funded Physics Frontier Center of the KICP, the Kavli Foundation, and the Gordon and Betty Moore Foundation.

Check out the first image of the Orion Nebula

‘Diamond rain’ in space could prove useful on Earth

Dust composite could be used to 3D print stuff on Mars