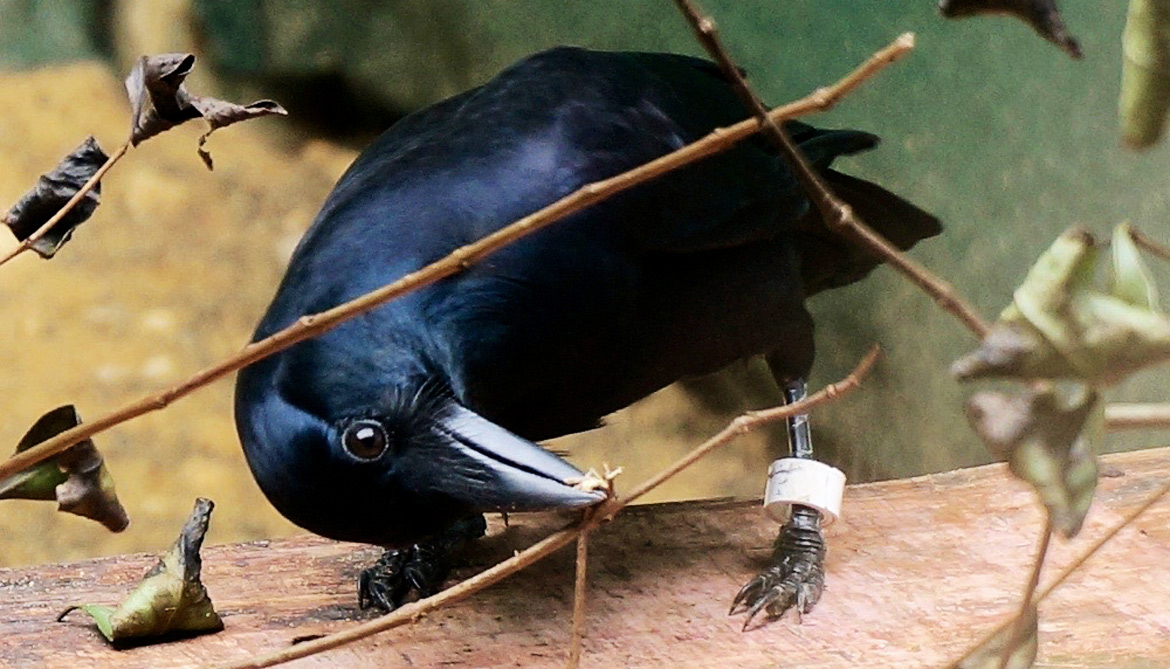 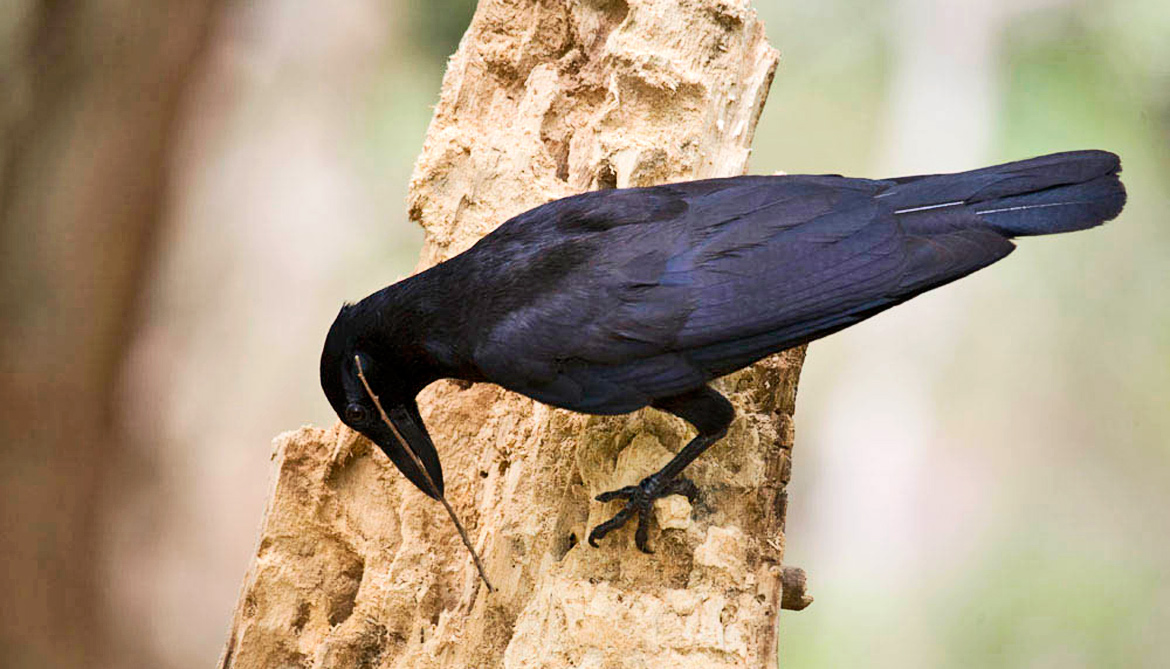 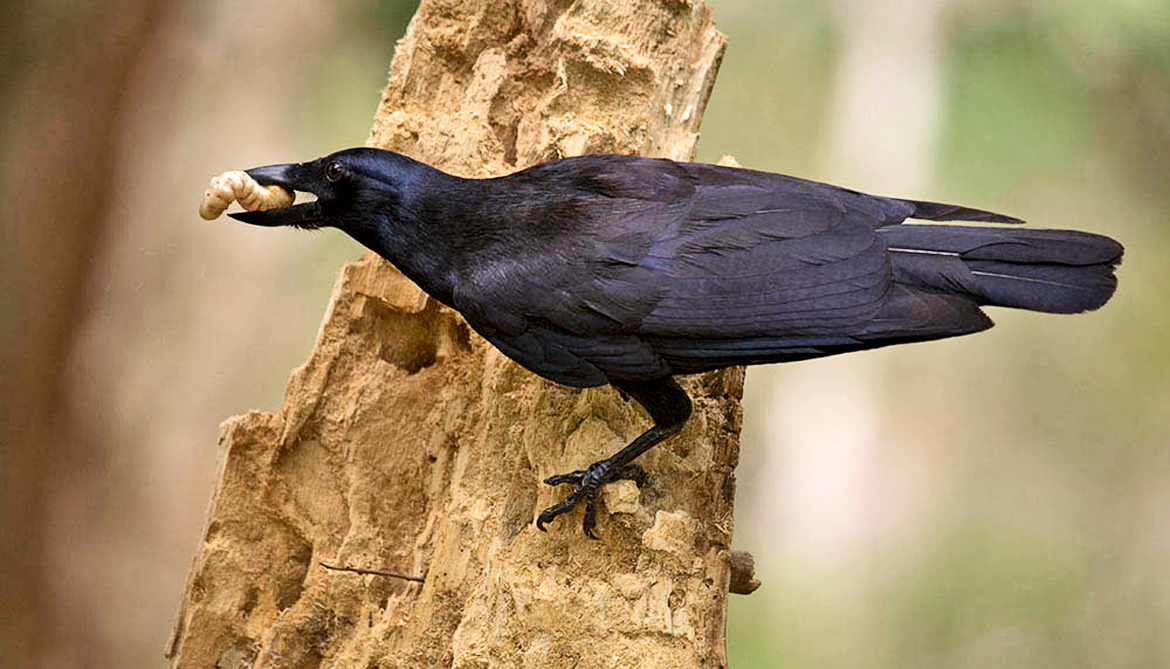 The New Caledonian crow is an extremely smart corvid and the only non-human species thought to have its own cumulative technological culture.

That means tool-building skill is passed from one generation to the next. As the implements change and improve over time, they seem to evolve right along with their users.

How the birds transmit knowledge to each other is the focus of a study by Corina Logan, who conducted the research as a junior research fellow at University of California, Santa Barbara’s Sage Center for the Study of the Mind.

“We don’t know whether the crows have cumulative technological culture, and one of the reasons is that we don’t know how they learn,” says Logan, now a Leverhulme Early Career Research Fellow in the zoology department at the University of Cambridge.

“Okay, if they don’t imitate or emulate, how could they still have cumulative technological culture?”

“There’s a hypothesis that says in order for cumulative technological culture to occur you need to copy the actions of another individual. And we don’t know whether the crows are paying attention to the actions of others when they learn from someone else.”

But the crows have been observed using tools they’ve made out of long, narrow, palm-like Pandanus leaves. “It has a serrated edge, and they cut into one side of the leaf, then make another cut farther down and then rip off the part in between,” Logan explained. “It makes a tool they can use to dig grubs out of logs.”

Even more curious, according to Logan, the crows have been observed using tools made of the same material but in different shapes—wide, narrow and stepped, which might be more structurally sound. However, no one has been able to explain the geographic variation in tool shapes—all three shapes are seen at the south end of New Caledonia, while the stepped tool is more prevalent everywhere else.

“It’s thought that in order for tool shapes to be transmitted, one bird would have to watch another cutting the leaf and then mimic that bird’s actions,” Logan continues. “That would require imitation or emulation.”

So Logan devised a study to look at all the learning mechanisms—social and asocial—the crows employ when solving a foraging problem. To level the playing field so that those birds with more experience with one particular tool don’t have an advantage over the others, Logan gave them a novel non-tool task.

She designed the experiment based on apparatus used by University of Leeds zoologist Will Hoppitt in a similar study he conducted with meerkats. “I used two apparatuses with multiple access points on each,” she says, “so we could look at whether the crows were imitating or emulating, whether they were just paying attention to another crow’s general location, or whether they were paying attention to a specific area on an apparatus that another crow was interacting with.”

Logan and colleagues found that the crows don’t imitate or copy actions at all. “So there goes that theory,” she says. “Assuming how they learn in a non-tool context carries over to a tool context, they wouldn’t copy the actions of individuals they see cutting up Pandanus leaves to make tools.”

But Logan and her team did strong evidence of social learning: If one crow sees a companion interacting with a particular area of the apparatus, reaching its bill through a door and pulling out a piece of boiled egg—the treat—the former is far more likely to try that particular door on either apparatus before choosing the other access options.

“It’s called stimulus enhancement,” she explains. “That’s the social learning mechanism they’re using. But there’s another interesting aspect: Once they see another bird interact with the door, they go to that door and then begin to solve the problem on their own. And now they completely ignore social information and they just use trial and error learning to open the door and extract the food.”

Even if one crow is at an apparatus and tries unsuccessfully to open the door, if he or she sees another crow on the second apparatus actually solving the problem correctly, the first crow doesn’t use that information. “The social learning attracts them to a particular object and then they solve it through trial and error learning after that,” Logan says.

“So we thought, ‘Okay, if they don’t imitate or emulate, how could they still have cumulative technological culture?'” she continues. Perhaps it’s a combination of social learning and trial and error.

Consider the grub-digging. “In the wild, juveniles live with or near their parents for the first year or so,” she explains. “The juveniles see their parents make and use a particular tool shape. And often the parent will leave the tool inside the hole in the log and the juveniles will grab it and start interacting with it.”

Similar to the stimulus enhancement Logan and her team identified initially, the crow parents could draw their children’s attention to the tools to make them more likely to interact with the tools. In addition, wild juveniles appear to learn how to use the tool through trial and error over the course of several months.

“We’re suggesting it could be that they’re copying the end result of another crow’s action, but they’re not copying the actual actions of the other crows,” Logan continues. “It’s actually a form of emulation but it doesn’t involve the copying actions that were hypothesized previously.”

For this study, Logan placed the crows in small groups. One was a family that consisted of two parents and their two sons; another included two mated pairs that weren’t related; and the third was made up of an adult and five juveniles. One of the juveniles was likely the adult’s daughter but the rest were unrelated. It had been previously hypothesized that juveniles do most of the learning, with adults picking up very little, if anything, from the youngsters or from each other.

It turns out this was mistaken. “It didn’t matter what group it was,” Logan says. “Everyone learned from everyone—juveniles from juveniles, adults from adults, juveniles from adults, adults from juveniles. It seems that if they have the opportunity, they’ll learn from anyone. But because they live in family groups, it seems to constrain who they have the opportunity to learn from in the wild.”

Logan plans to replicate the study with the great-tailed grackle, another highly intelligent bird. “They are expanding their range really rapidly,” she says. “There are many questions about how they learn to forage so successfully in new environments. Are they learning from other species about what to forage on when they encounter a new food type? Or are they exploring on their own, using their own information?”

According to Logan, studies such as this broaden our understanding of the nature of cumulative technological culture. If it can spread through other mechanisms, such as stimulus enhancement—simply drawing one’s attention to something and imprinting on a particular way of doing things—it could expand scientists’ ideas about where they should look for cumulative culture in general, and cumulative technological culture in particular.