Graduate student Melinda Webster uses a probe to measure snow depth and verify NASA airborne data. She is walking on sea ice near Barrow, Alaska in March 2012. Her backpack holds electronics that power the probe and record the data. (Credit: Chris Linder/University of Washington) 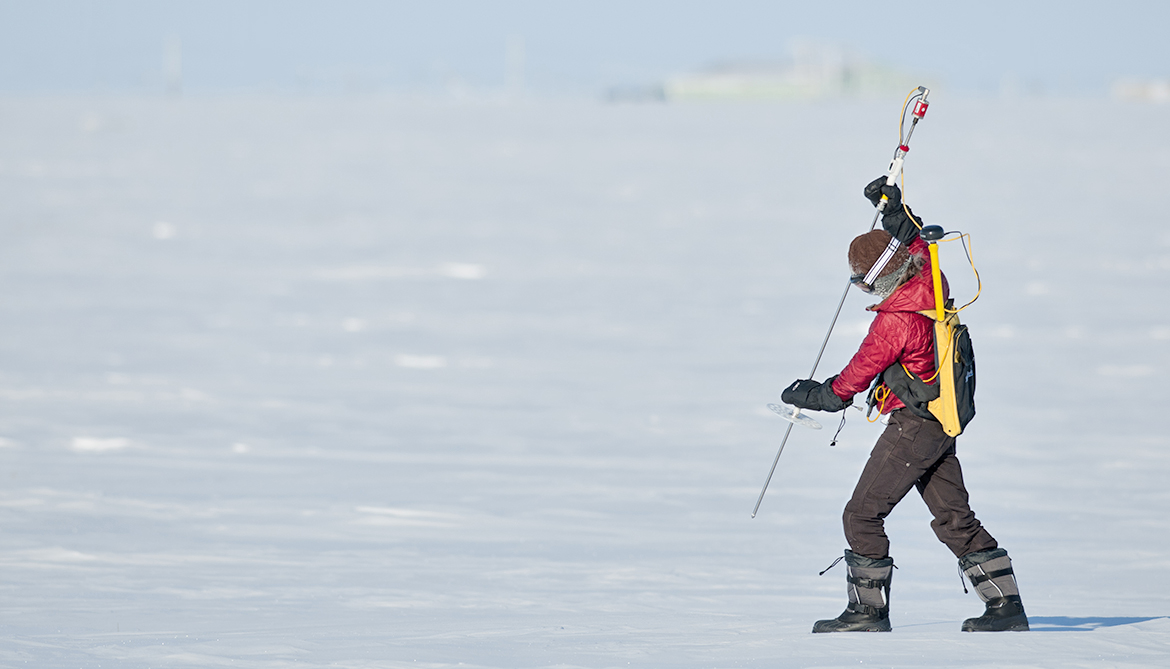 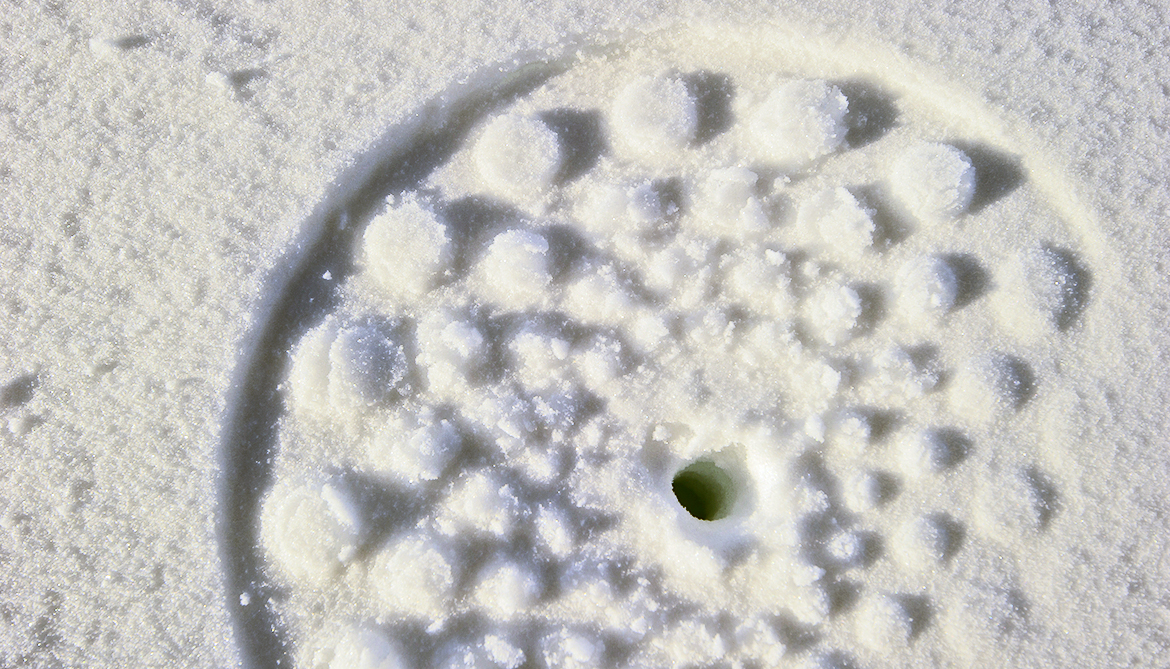 An analysis of recent and historic data confirms snow has thinned significantly in the Arctic, particularly on sea ice in western waters near Alaska.

Scientists have been tracking the depth of snow that accumulates on Arctic sea ice for almost a century. The new study combines data collected by ice buoys and NASA aircraft with historic data from ice floes staffed by Soviet scientists from the late 1950s through the early 1990s to track changes over decades.

Historically, Soviets on drifting sea ice used meter sticks and handwritten logs to record snow depth. Today, researchers on the ground use the automated probe to verify the accuracy of airborne measurements.

“When you stab it into the ground, the basket moves up, and it records the distance between the magnet and the end of the probe,” says first author Melinda Webster, a graduate student in oceanography at University of Washington. “You can take a lot of measurements very quickly. It’s a pretty big difference from the Soviet field stations.”

Webster verified the accuracy of airborne data taken during a March 15, 2012, NASA flight over the sea ice near Barrow, Alaska. The following day she followed the same track in minus 30-degree temperatures while stabbing through the snow every two to three steps.

The authors compared data from NASA airborne surveys, collected between 2009 and 2013, with US Army Corps of Engineers buoys frozen into the sea ice, and earlier data from Soviet drifting ice stations in 1937 and from 1954 through 1991.

That’s a decline in the western Arctic of about a third, and snowpack in the Beaufort and Chukchi seas less than half as thick in spring in recent years compared to the average Soviet-era records for that time of year.

“Knowing exactly the error between the airborne and the ground measurements, we’re able to say with confidence, yes, the snow is decreasing in the Beaufort and Chukchi seas,” says oceanographer Ignatius Rigor, a coauthor of the study that is published online in the Journal of Geophysical Research.

The authors speculate the reason for the thinner snow, especially in the Beaufort and Chukchi seas, may be that the surface freeze-up is happening later in the fall so the year’s heaviest snowfalls, in September and October, mostly fall into the open ocean.

Thinner snow has other effects, Webster says, for animals that use the snow to make dens, and for low-light microscopic plants that grow underneath the sea ice and form the base of the Arctic food web.

The new results support an earlier study in which Russian and American scientists first analyzed the historic Arctic Ocean snow measurements. That paper detected a slight decline in spring snow depth that the authors believed, even then, was due to a shorter ice-covered season.

“This confirms and extends the results of that earlier work, showing that we continue to see thinning snow on the Arctic sea ice,” Rigor says.

The recent fieldwork was part of NASA’s Operation IceBridge program, which is using aircraft to track changes while NASA prepares to launch a new ice-monitoring satellite in 2017. The team conducted research flights in spring 2012 as part of a larger program to monitor changes in the Arctic.

NASA and the US Interagency Arctic Buoy Program supported the study. Researchers from University of Maryland, the federal Cold Regions Research and Engineering Laboratory, University of Alaska Fairbanks, and NASA’s Jet Propulsion Laboratory and Goddard Space Flight Center are coauthors.

Ice sheets ‘talk’ to each other across the planet