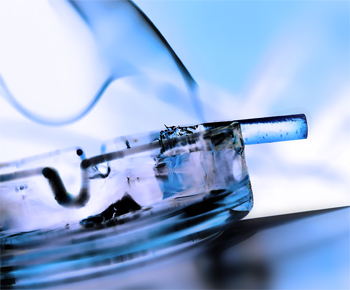 “Tobacco cessation gets a lot of attention, but we leave out a population that smokes the majority of all the cigarettes,” says Brian Hitsman.

NORTHWESTERN (US)–People with mental illnesses such as depression and anxiety are the heaviest smokers in the country, but doctors are not recommending they quit, according to a recent study.

The decision is based on the myth that if patients try to quit smoking, their mental disorders will worsen, says Brian Hitsman, assistant professor of preventive medicine at Northwestern University Feinberg School of Medicine.

“These doctors and mental health specialists focus on their patients’ psychiatric health and lose track of their physical health,” says Hitsman, a health psychologist and tobacco addiction specialist. “Tobacco cessation gets a lot of attention, but we leave out a population that smokes the majority of all the cigarettes.”

According to research, between 40 and 80 percent of people with mental illness are daily smokers, often smoking up to two packs per day. Smokers also have a disproportionately high rate of tobacco-related disease and mortality, such as cardiovascular disease or cancer, with a correspondingly heavy financial burden to the health-care system.

The same research shows that less than 20 percent of people without mental illness smoke.

“Not a single study shows that symptoms get worse,” when a patient stops smoking, he  says.

“The perception is patients need tobacco because it’s their only source of pleasure and helps them feel better,” Hitsman adds. “There is very little evidence, though, that smoking cigarettes serves to self-medicate emotional symptoms.”

“They find if you take advantage of the relationship with the counselor and insert smoking cessation counseling into treatment that you enhance quit rates,” Hitsman argues.

Hitsman has designed the first comprehensive, evidence-based plan for psychiatrists, psychologists and other mental health providers to help their patients quit smoking.

People with mental disorders do have a harder time quitting than the general population, Hitsman acknowledges, but says newer studies show it is possible to enhance the chance of success with his approach. Even if patients simply reduce their smoking, they are much more likely to quit successfully at a later date.

Using Hitsman’s plan, the counselor highlights the benefits of quitting, the personal costs of smoking, and the barriers to cessation success. “It gets the person in a problem-solving mode, at the basis of which is a solid relationship with the counselor,” Hitsman explains.

Tobacco dependence also needs to be treated as a chronic disease, Hitsman believes. “We know that treatment provided for a longer duration substantially increases the abstinence rates of people without mental disorders,” he notes.

“Smokers with mental illness may be especially likely to benefit from extended or maintenance tobacco treatment.”

Researchers from the University of Toronto and the National Institute on Drug Abuse contributed to the paper, which is published in the Canadian Journal of Psychiatry.