BROWN (US) — Skin is able to detect ultraviolet light by using a receptor previously thought to only exist in the eye.

This eye-like ability of skin to sense light triggers the production of melanin within hours, more quickly than previously thought, in an apparent rush to protect against damage to DNA.

“As soon as you step out into the sun, your skin knows that it is exposed to UV radiation,” says senior author Elena Oancea, assistant professor of biology at Brown University. “This is a very fast process, faster than anything that was known before.”

Scientists believe that melanin protects the DNA in skin cells against damage from UVB rays by absorbing the incoming radiation. It’s not a perfect solution, which is why sun block is necessary. 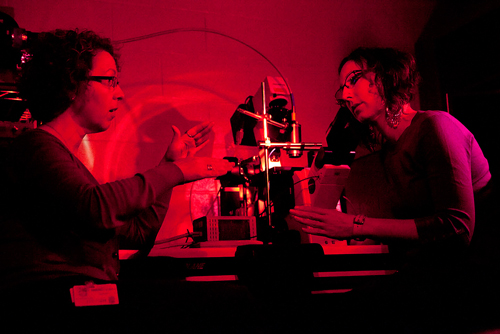 Elena Oancea, left, and Nadine Wicks have discovered that skin cells contain rhodopsin, a photosensitive receptor used by the eye to detect light, and use it as a self-defense measure against damage to DNA. (Credit: Mike Cohea)

But the new study published in the journal Current Biology shows that the body mounts its defense much sooner, well before it becomes apparent in the form of a tan.

In lab experiments with human melanin-producing skin cells called melanocytes, researchers discovered that the cells contain rhodopsin, a photosensitive receptor used by the eye to detect light and traced the steps of how it unleashes calcium ion signals that instigate melanin production.

Eyes on the skin

In the first experiment, the scientists were looking to see whether UV light instigated a calcium signaling response and found nothing. But guessing that the skin might sense light like the eyes do, they added retinal, a co-factor of opsin receptors including rhodopsin.

“When we did that, we saw an immediate and massive calcium response,” says graduate student Nadine Wicks, the study’s lead author.

Further investigations found that the cells contained rhodopsin RNA and protein. Under UV light, when the scientists reduced rhodopsin levels in the cells, calcium signaling was reduced. Later, when they starved cells of retinal, they found that melanin production dropped. The authors also determined that long-wavelength UVA light, rather than short-wavelength UVB light, is what stimulates rhodopsin in melanocytes.

During several experiments the researchers were able to trace the following process: When UVA light strikes rhodopsin receptors with retinal, calcium signals are triggered within a few seconds. After an hour, measurable amounts of melanin accumulate, although in relatively small quantities compared to the production that will occur within 24 hours.

Oancea and Wicks still have some questions. One is whether rhodopsin is acting alone or in concert with another yet undiscovered receptor. Another question is whether melanocytes immediately begin exporting melanin to other kinds of skin cells for protection or whether they keep the early supply for themselves.

Just because scientists are learning more about how the skin responds to and protects itself against UV radiation, people should not change what they do to protect the skin. “This doesn’t say, ‘Don’t use sunscreen’,” Oancea says.

Brown University, the National Institutes of Health, and the Natural Sciences and Engineering Research Council of Canada supported the research.

‘Hero’ protein has a helper for DNA repair

Stretchy sensor works like a brain to process health data