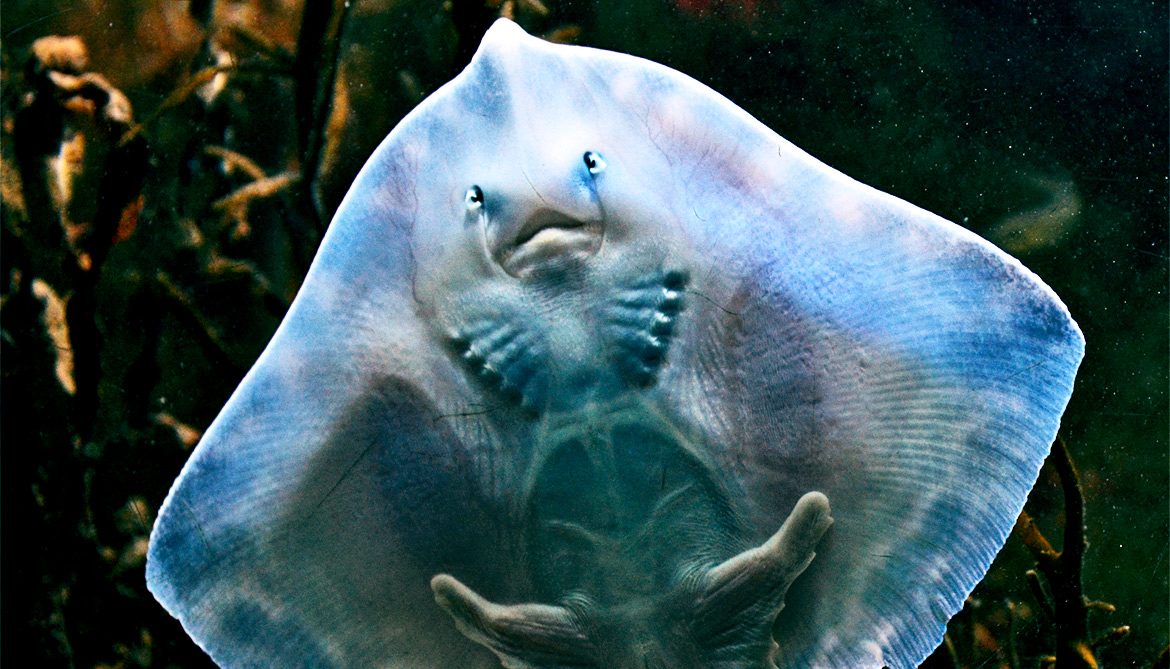 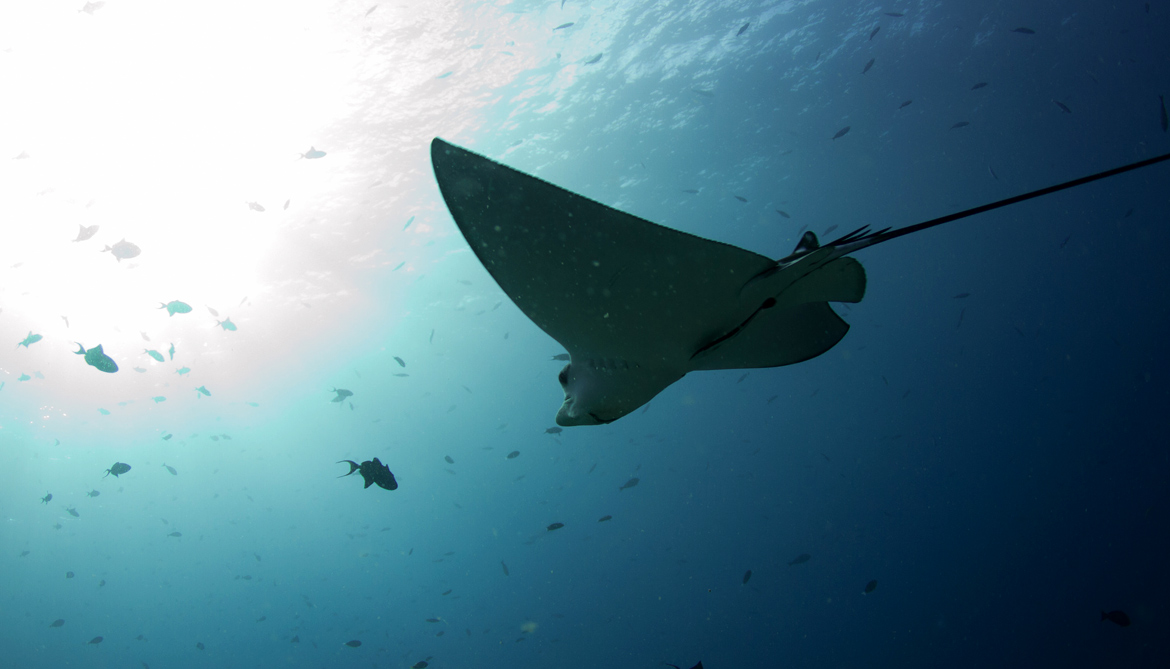 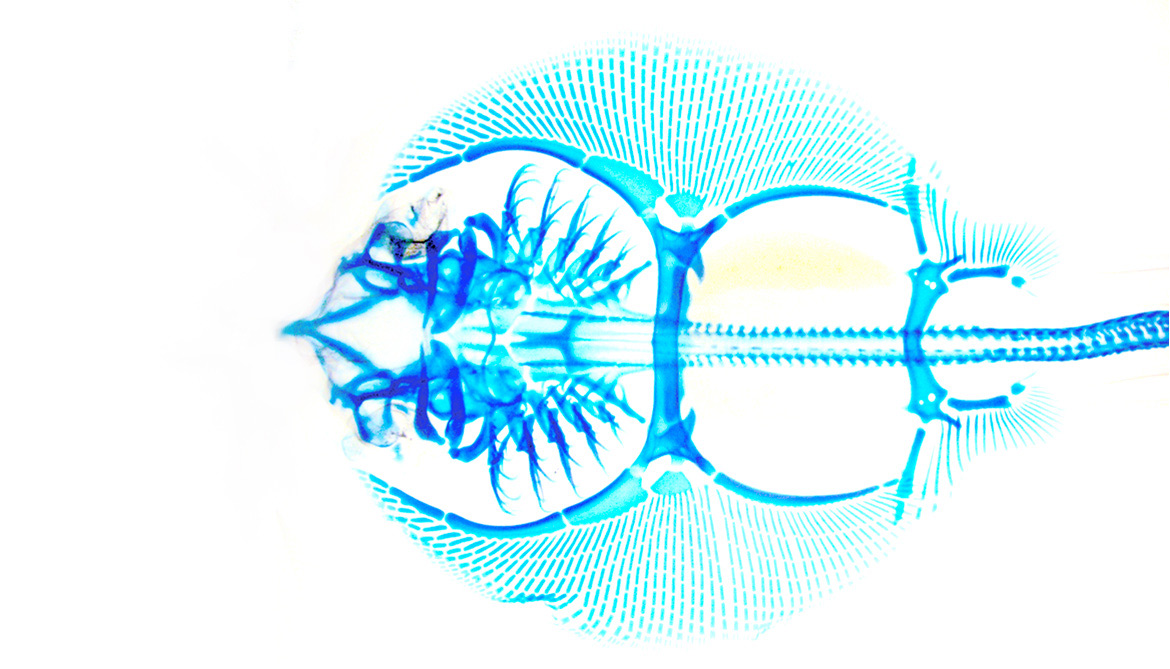 Skates and rays get their striking, wing-like pectoral fins from repurposed genes, according to new research.

The findings, published in the Proceedings of the National Academy of Sciences, shed light on the genetic mechanisms responsible for the evolution and diversification of vertebrate appendages.

“What is surprising is that the extraordinary anatomy of skate fins comes about by simple tweaks to the processes that make the more normal-looking fins of other fish,” says senior study author Neil Shubin, professor of organismal biology and anatomy at the University of Chicago.

How the limbs of tetrapods, or four-legged animals, develop is an area of intense research in biology, with great strides made in understanding the genetics and molecular mechanisms involved. However, much less is known about how fish acquired their remarkable diversity in fin shape and function—including at least one set that became adapted for life on land.

To study how fins evolve and diversify, Shubin and his team led by postdoctoral fellow Tetsuya Nakamura analyzed gene expression in the embryos of batoids—a group of cartilaginous fish including skates and rays, which evolved from an ancient lineage of shark that dramatically altered its body plan to adapt to life on ocean or river bottoms.

With flat bodies and broad pectoral fins that are fused to their heads, batoids possess one of the most unique appendage shapes among vertebrates.

Toward heads and tails

The researchers discovered that the pectoral fins of embryonic skates, at least early on, mirrored limb development in other species of fish and tetrapod. A group of genes and growth factors are expressed in precise patterns in the budding appendage, which help create the apical ectodermal ridge (AER)—a region that stimulates cell proliferation along the growing edge of the limb and is essential for elongation, organization, and proper development.

Remarkably, different groups of genes appear to control the two regions. Among the many genes involved, the 5’Hox family of transcription factors and the Fgf10 growth factor play a central role in forming and maintaining the AER in most fish and tetrapods. In skates, these genes were present and functioning as normal in the fin region growing toward the tail. The region oriented toward the head, however, was maintained by a separate group of genes—most prominently, 3’Hox transcription factors and Fgf7.

“Even though the posterior and anterior regions of a skate fin look similar, gene expression is totally different,” Nakamura says. “This indicates that they have very different mechanisms that control growth of the anterior portion, which are not found in tetrapods or other fish. I think these genes are very important for the evolution of skate or stingray shapes.”

Although the 3’Hox and 5’Hox gene families and Fgf7 and Fgf10 respectively are related to each other, they normally perform different functions at different locations. In most species, 3’Hox genes and Fgf7 are observed at the base of the budding limb, around where the shoulder would eventually be. The expression of these genes in the pectoral fin, and their role in creating a second AER, appears to be a unique adaptation possessed by batoids.

The researchers are now further exploring the genetic mechanisms involved in the development of batoid fins, as well as other distinctive fin shapes in other species.

“Skates appear to have redeployed a preexisting genetic module to the anterior of their fins, which enabled the evolution of their unique shape,” Nakamura says.

“A better understanding of these molecular mechanisms will help us answer questions about the general diversity of fish fins—how they changed shapes, what shapes are possible, what molecular kits can be recruited, and ultimately how fins transitioned into tetrapod limbs.”

Support for the work came from the Brinson Foundation, the Japanese Society for the Promotion of Science, Uehara Memorial Foundation, Brazilian National Council for Scientific and Technological Development, and the National Institutes of Health.