U. FLORIDA (US) — Sex hormones present in early embryonic development determine finger length, a finding that scientists say may offer clues to the origin of behavior and disease.

Men’s ring fingers are generally longer than their index fingers and the opposite is true for women.

The discovery reported in Proceedings of the National Academy of Sciences, show how differences in sex hormones activate receptors in males and females and affect the growth of specific digits. 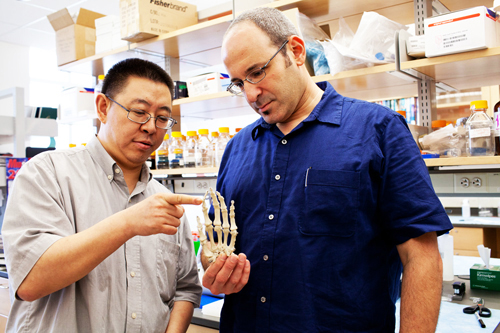 The new research provides a genetic explanation for a raft of studies that link finger proportions with traits ranging from sperm counts, aggression, musical ability, sexual orientation, and sports prowess, to health problems such as autism, depression, heart attack and breast cancer, according to Martin Cohn and Zhengui Zheng, developmental biologists at the University of Florida.

“The discovery that growth of the developing digits is controlled directly by androgen and estrogen receptor activity confirms that finger proportions are a lifelong signature of our early hormonal milieu,” Cohn says.

“In addition to understanding the basis of one of the more bizarre differences between the sexes, it’s exciting to think that our fingers can tell us something about the signals that we were exposed to during a short period of our time in the womb.

“There is growing evidence that a number of adult diseases have fetal origins. With the new data, we’ve shown that the digit ratio reflects one’s prenatal androgen and estrogen activity, and that could have some explanatory power.”

The researchers found that the developing digits of male and female mouse embryos are packed with receptors for sex hormones. By following the prenatal development of the limb buds of mice, which have a digit length ratio similar to humans, they were able to control the gene signaling effects of androgen (testosterone) and estrogen.

Essentially, more androgen equated to a proportionally longer fourth digit. More estrogen resulted in a feminized appearance. The study uncovered how these hormonal signals govern the rate at which skeletal precursor cells divide, and showed that different finger bones have different levels of sensitivity to androgen and estrogen.

Since Roman times, people have associated the hand’s fourth digit with the wearing of rings. In many cultures, a proportionally longer ring finger in men has been taken as a sign of fertility.

“I’ve been struggling to understand this trait since 1998,” says John T. Manning, a professor at Swansea University in the UK, who was not involved in the current research. “When I read this study, I thought, thank goodness, we’ve attracted the attention of a developmental biologist with all the sophisticated techniques of molecular genetics and biology.”

Manning has for years studied the meaning of the relative lengths of second and fourth digits in humans, known to scientists as the 2D:4D ratio.

“When Zheng and Cohn blocked testosterone receptors, they got a female digit ratio. When they added testosterone they got super male ratios, and when they added estrogen, super female ratios. And they’ve provided us with a list of 19 genes that are sensitive to prenatal testosterone and prenatal estrogen. We can now be more focused in our examination of the links between digit ratio and sex-dependent behaviors, diseases of the immune system, cardiovascular disorders, and a number of cancers.”

“He suggested that the 2D:4D ratio would be an interesting question, and I have to admit to being skeptical,” Cohn says. “When he came back with the initial results, I was blown away.  We looked at each others hands, then got busy planning the next experiment.”

The National Institute of Environmental Health Sciences and the Howard Hughes Medical Institute supported this research.

‘Evil’ protein may be key in common breast cancer