U. ROCHESTER (US) — Scientists are testing a new sensor designed to be the eyes of a future asteroid-tracking mission.

“The Near Earth Object Camera (NEOCam) sensor will increase our ability to detect hazardous asteroids near the Earth and improve our understanding of threatening objects,” says William J. Forrest, professor of astronomy at the University of Rochester. 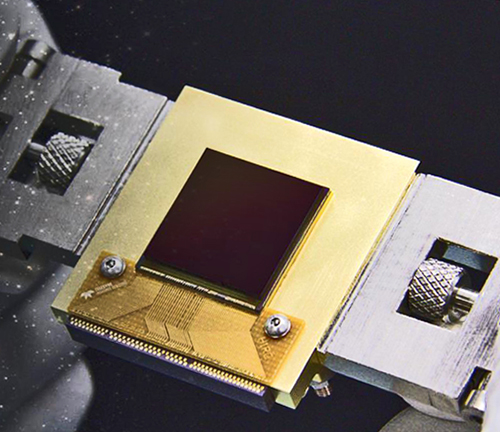 The NEOCam sensor is the lynchpin for the proposed Near Earth Object Camera, or NEOCam, space mission. (Credit: NASA/JPL-Caltech/Teledyne)

Once launched, the space-based telescope would be positioned at a location about four times the distance between Earth and the moon. From this lofty perch, NEOCam could observe the comings and goings of objects near Earth without the impediments to efficient observing like cloud cover and even daylight.

Asteroids do not emit visible light, they reflect it, which can make it difficult to determine size using visible light telescopes. But asteroids always emit infrared radiation.

“We can learn more about asteroids when we look at them with infrared light,” explains Amy Mainzer, an author on the paper and principal investigator for NASA’s NEOWISE and NEOCam missions at the Jet Propulsion Laboratory (JPL). “When you observe a space rock with infrared, you are seeing its thermal emissions, which can better define the asteroid’s size as well as tell you something about composition.”

Asteroids emit most of their radiation at infrared wavelengths near about 10 microns (0.0004 inches), which humans perceive as heat. There is also relatively less radiation from stars and galaxies at these wavelengths, which simplifies detection of faint moving objects.

The sensor can be thought of as a megapixel camera chip that can collect infrared light at these wavelengths.

“This sensor works at higher temperatures than any other similar ones we have at the moment,” says Judith Pipher, emeritus professor in physics and astronomy at Rochester. “This means they can be passively cooled, making the instrument less heavy and less expensive to put into space.”

The NEOCam sensor is made of mercury, cadmium, and tellurium. Pipher and her colleague Forrest started working on sensors from this combination of materials nearly 20 years ago, when they saw the potential they offered for higher operating temperatures.

Craig McMurtry, the paper’s lead author, is also a member of the Rochester team. “We were delighted to see in this generation of detectors a factor of 1000 improvement in sensitivity compared with previous generations, while simultaneously raising the operating temperature to one readily attainable in space,” he says.

The project, supported by NASA, is the result of a long-term collaboration between the University of Rochester and the Jet Propulsion Laboratory (JPL) at Caltech, together with Teledyne Imaging Sensors.

A paper on the NEOCam sensor test will be published in an upcoming issue of the Journal of Optical Engineering.