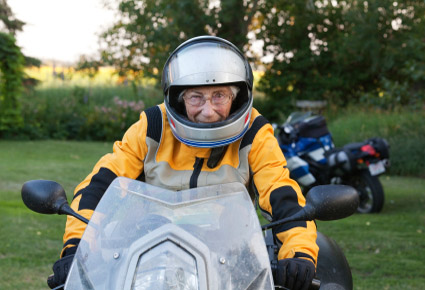 Motorcycle riders across the country are growing older, and the impact of this trend is evident in emergency rooms daily. Doctors are finding that senior citizens who ride motorcycles are more likely to be injured or die as a result of a motorcycle mishap compared to their younger counterparts due to factors associated with aging, including impaired vision, delayed reaction time, altered balance, decreases in bone strength, and brain size. Credit: iStockphoto

U. ROCHESTER (US)—Continuing to ride a motorcycle may keep some senior citizens young at heart, but they are more likely to be injured or die as a result of a mishap when compared to their younger counterparts.

Between 1996 and 2005, the average age of motorcyclists involved in crashes increased from approximately 34 to 39 years, and the proportion of injured riders above the age of 40 increased from around 28 percent to close to 50 percent. Of all injured riders, 50- to 59-year-olds represented the fastest growing group.

“We made the clinical observation that older patients—people in their 50s, 60s, and even 70s—were being injured on motorcycles with increasing frequency,” says Mark Gestring, associate professor of surgery, emergency medicine, and pediatrics at the University of Rochester Medical Center. “We wanted to see if this observation was true on a national level and we found that it was.”

For riders above the age of 40, injury severity, length of stay in the hospital or intensive care unit, and mortality were higher compared to riders below the age of 40.

The risk of dying was one-and-a-half to two times more likely in riders older than 40, based on the severity of the original injury.

The study also found that older riders are more likely to die from less severe injuries than younger riders, to spend at least 24 hours in the intensive care unit, and to have more pre-existing co-morbidities and complications, such as heart attack and infections, that contribute to longer hospital stays.

“60-year-olds bring a lot more medical baggage with them, and this can adversely impact outcomes following injury. As people start to dust off their motorcycles this spring, older riders should take an extra measure of caution; if an accident happens they’ll often pay a higher price than younger riders.”

The increase in injury severity for older riders may be related to the reduced capacity to withstand injury as the body ages.

Age-related changes, such as decreases in bone strength and brain size, may make older riders more susceptible to injury. Other factors associated with aging, such as impaired vision, delayed reaction time, and altered balance contribute to motorcycle crashes in this population.

In the study, which was published in the March issue of the American Surgeon, researchers using the National Trauma Databank reviewed the records of 61,689 motorcyclists aged 17 to 89 years involved in a motorcycle crash between 1996 and 2005.

Injury patterns remained stable over the study period, with extremity fractures, such as broken arms and legs, being the most common injuries, occurring in approximately 25 to 40 percent of motorcyclists studied.

The majority of severe injuries were chest and head injuries—a significantly higher proportion of older riders sustained these types of injuries compared to younger riders.

The younger and older riders did have two things in common: helmet use and alcohol use. Overall helmet use was around 73 percent for both groups, and alcohol use was seen in approximately one third of injured motorcyclists, with no significant difference between the older and younger riders.

“We are looking at the development of prevention programs targeting motorcycle safety for older individuals, possibly in partnership with local motorcycle clubs and other interested groups,” says Gestring.