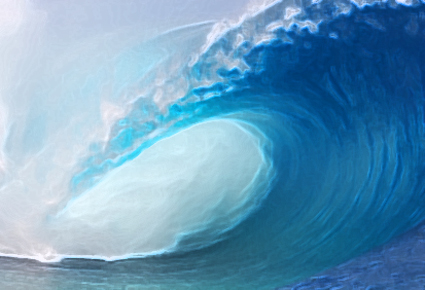 “There is this idea that we look out into the world and see this ongoing flow of consciousness that has been compared to a stream,” says the paper’s lead author, Kyle Mathewson. “This evidence and other evidence are starting to show it might not be like that, it might be more discrete.” That is, “the brain can synchronize its waves of consciousness to predictable rhythmic events,” says coauthor Diane Beck.

U. ILLINOIS (US)—The term “stream of consciousness”—used both in the literary world and by psychologists to describe  the way our conscious minds interpret the world—may not accurately depict the way visual systems in our brains function.

A study published by University of Illinois researchers in 2009 reveals the discovery of a pulsed inhibition mechanism in the brain that explained how the visual system often fails to perceive normally detectable visual stimuli from the environment because the brain samples the visual environment in rhythmic “frames” rather than continuously.

Now a second paper in this research line is reporting that these rhythmic frames can be entrained to external signals and induce an increase in visual sensitivity at the precise moment in time in which a visual event is expected to happen.

The results of experimental findings from this most recent study, the researchers write, “suggest a plausible mechanism of temporal attention.” That is, “the brain can synchronize its waves of consciousness to predictable rhythmic events,” says Diane Beck, a coauthor of the paper.

“There is this idea that we look out into the world and see this ongoing flow of consciousness that has been compared to a stream,” says Kyle Mathewson, lead author of the paper that appears in the journal Cognition. “This evidence and other evidence are starting to show it might not be like that, it might be more discrete.”

This latest study shows that the effect the researchers observed can be controlled through entraining the brain. The authors write: “This entrainment may represent a mechanism by which temporal attention is tuned to produce temporally-precise peaks in visual sensitivity, to both anticipate and optimize visual processing of brief visual events. Rhythmic visual entrainment has a dramatic effect on visual sensitivity, providing us with a powerful technique to experimentally control with fine temporal precision whether or not near-threshold stimuli reach conscious awareness.”

Mathewson says this is the first time that research has demonstrated that these brain rhythms can be controlled and harnessed in this way. “These results are the first evidence that you can actually entrain the brain rhythms of the visual system that we measured in the past experiment so that you can have control over visibility of stimuli.

“In our previous paper we found that, depending on what state of this ongoing phase the brain is in, you will be more or less likely to see a target or it will escape your awareness. Now we are able to actually control the really precise timing of those events. It’s almost like we can set up a filter through which people can look at the world that has a timing aspect to it.”

The experiment employed a faint, rhythmic light stimulus and the technique of backward masking, which involves a second visual stimulus that masks the stimulus that preceded it so that the second stimulus is the one that reaches the conscious mind and the first is at near-threshold levels of being seen, causing its visual information to be lost.

The researchers report that the results show how “consciousness of otherwise masked stimuli can be experimentally induced by sensory entrainment” and that the data reveals how “awareness of near-threshold stimuli can be manipulated by entrainment to rhythmic events, supporting the functional role of induced oscillations in underlying cortical excitability, and suggest a plausible mechanism of temporal attention.”

“The entrainment allows the brain to be more sensitive at a particular moment in time—the time where it is expecting the world to show something,” says coauthor Alejandro Lleras. “If you present the stimulation at that particular point in time then we are able to increase the sensitivity of the brain to outside stimulation. Now you will be able to see things that otherwise would be much less likely to register in your brain.”

Lleras says the effect seen in this study are something new. “For a long time this has been portrayed as random fluctuations in the brain, neural noise and things like that,” he adds. “Things we can never get a handle on, stochastic processes in the brain. But now we seem to be starting to get a handle on that issue and discovering ways in which we can get better at saying whether you will in fact see that little light and increasing your chances of seeing that light. The magnitude of our effect is pretty large.”

How left-right brain handoffs happen without a hitch

In the eyes (and brains) of the beholder