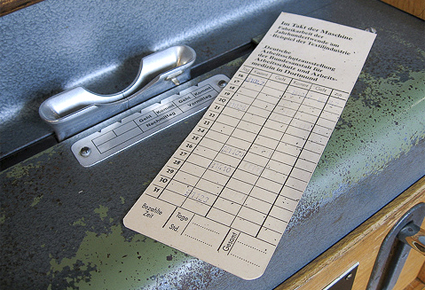 A study that finds a stronger tie between money and happiness for hourly workers also finds salaried people would rely more on income to evaluate their happiness if they were made aware of an implicit hourly wage. “If they’re thinking about their income, then all of a sudden, even people who are paid by salary become much more like hourly paid workers,” says Jeffrey Pfeffer. (Courtesy: Marcin Wichary/Flickr)

STANFORD (US)—The link between money and happiness is stronger for workers paid by the hour than for their salary-earning counterparts.

Researchers at Stanford University and the University of Toronto say that’s because hourly workers are more often reminded of how much they earn, and this makes money more salient in their thinking.

The study was published in a recent edition of Personality and Social Psychology Bulletin.

“If you are paid by the hour or account for your time on a timesheet, you begin to see the world in terms of money and in terms of economic evaluation,” explains Jeffrey Pfeffer, the Thomas D. Dee II Professor of Organizational Behavior at the Stanford Graduate School of Business. “To the extent that time becomes like money and money becomes more salient, the linkage between how much you earn and your happiness increases.”

Pfeffer and Sanford DeVoe of Toronto studied data from American and British surveys of income, hourly versus salary pay status and general happiness. The surveys showed that pay determines the happiness of hourly workers more than it does for people paid by salary.

The researchers asked people to assess their happiness, requiring a random set of the participants to first calculate their hourly earnings.

They rated statements such as “I am satisfied with my life” and answered questions such as “Have you been feeling unhappy and depressed?”

Salaried participants who made the calculations used their income to rate happiness about as much as did hourly paid participants.

The study found that even salaried people would rely more on income to evaluate their happiness if they were made aware of an implicit hourly wage.

“If they’re thinking about their income, then all of a sudden, even people who are paid by salary become much more like hourly paid workers,” Pfeffer says.

“They think of their time in terms of money, the connection between income and happiness goes up and they become economic evaluators of their use of time in their life.”

The study shows that organizational practices such as paying people by the hour affect employees beyond the workplace, Pfeffer explains. Workers begin to think differently about money, time and happiness.

“How organizations pay people has profound effects outside of that organizational context. If you’re paid by the hour, you come to see your time in a certain way that doesn’t change when you walk out of your employer’s door.”

How long will the supply chain crunch last?

Secondhand clothing is big business, but is it truly green?