GEORGIA TECH (US) — Scientists have mapped the chemical structure of molecules used by certain species of seaweed to kill or inhibit reef-building coral.

Chemicals found on the surfaces of several species of seaweed have been shown to harm coral, suggesting that competition with these macroalgae could be a factor in the worldwide decline—and lack of recovery—of coral reefs.

Seaweed growth on coral reefs is normally controlled by plant-eating fish, but in many parts of the world, overfishing has dramatically reduced populations of these consumers—allowing the seaweed to dominate. 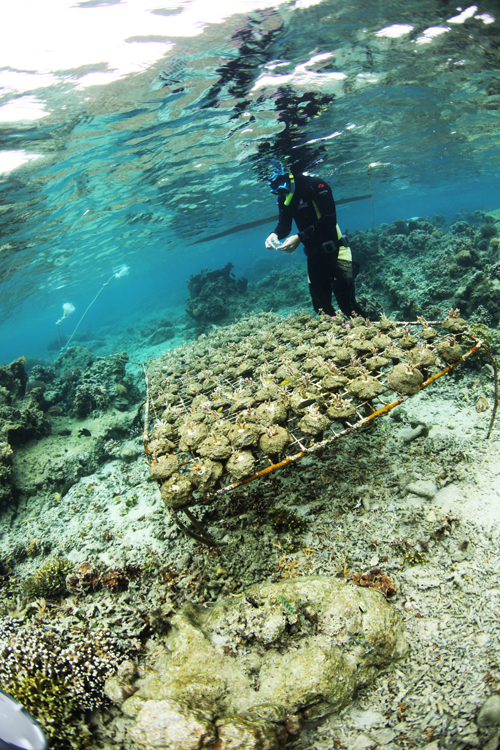 Above, Douglas Rasher prepares small coral colonies for seaweed-coral competition experiments on a reef in Fiji. Below, healthy corals in the Votua Marine Protected Area of the Fiji Islands are shown in this photo. (Credit: E.H. Hay) 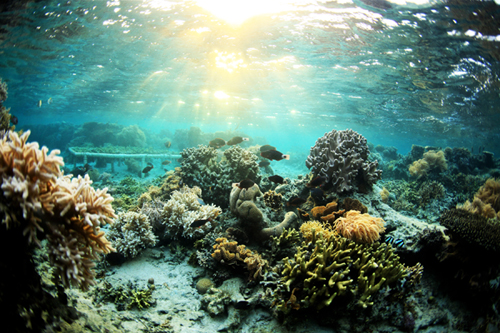 Understanding these harmful chemicals and the seaweeds that produce them, however, could lead to development of new management techniques aimed at protecting fish that consume the most harmful seaweed. Protecting these herbivores could help reduce the pressure on coral, potentially allowing recovery of some endangered reefs.

Research on the coral-harming chemicals were reported the journal Proceedings of the National Academy of Sciences (PNAS).

“We were able to isolate some of the key molecules responsible for the harmful interactions between seaweed and coral,” says Douglas Rasher, a graduate student in biology at the Georgia Institute of Technology. “These molecules are active at very low concentrations, suggesting that they need only to be expressed on the surfaces of the seaweed in minute concentrations to have damaging effects when they are in contact with the coral.”

A May 2010 PNAS study published by Rasher and biology professor Mark Hay showed for the first time that chemicals on the surfaces of seaweed could harm coral. To assess the scope of the coral-seaweed interaction, the researchers followed up their initial study by investigating interactions between eight different species of seaweed and three species of coral growing in the waters off the Fiji Islands.

In 79 percent of the interactions studied, the seaweed chemicals harmed the coral.

“Though some corals were more resistant than others, what we have shown is that these seaweeds are generally bad for corals,” says Hay, who has been studying coral reefs for more than 30 years. “At some level, these seaweed molecules can definitely kill the corals. But at other levels, what they are probably doing is cutting off the options for reefs to recover by making these reefs unreceptive to newly arriving coral larvae. It is difficult for juvenile corals to colonize and grow through a chemically-toxic layer of seaweed.”

In the 2010 study, the researchers determined that seaweed harmed coral only when their surfaces touched. That meant the harmful compounds were likely hydrophobic chemicals that dissolved in oil rather than water.

To identify the specific harmful compounds, the researchers produced extracts from the surfaces of the two most harmful seaweeds. Using a technique called bioassay-guided fractionation, they divided up compounds in these seaweed extracts by the degree to which they could be dissolved in oils versus water, or by their size.

They then placed gels containing the extracted compounds into contact with the most sensitive coral, Acropora. The coral samples had been placed into metal racks located on healthy coral reefs near Votua Village in the Fiji Islands. Similar gels not containing the extracts were used as controls—and produced no effect on the coral.

By studying the effects of the extracts on the coral with a pulse-amplitude-modulated fluorometer to assess changes in coral photosynthesis, the researchers narrowed the list of suspect molecules.

From the two most chemically damaging seaweed species, the researchers isolated and identified four toxic molecules for detailed chemical analysis. Those compounds, identified as acetylated diterpenes and loliolide derivatives, are from a class of organic compounds known as terpenes.

The four molecules—two from a green alga known as Chlorodesmis fastigiata and two from a red alga known as Galaxaura filamentosa—were brought back to Georgia Tech for further study. They were analyzed by Julia Kubanek, a professor with joint appointments biology and in chemistry and biochemistry, and by graduate student Paige Stout. Kubanek and Stout, who were also involved in a related project aimed at discovering potential drug compounds on the coral reefs, mapped the structures of the toxic molecules.

For the future, the researchers hope to learn more about the compounds and how they evolved in seaweed. Contact between seaweed and coral would have been limited on pristine reefs, so Hay and Rasher believe the molecules may have evolved as part of defense against microbes or herbivorous fish. They also want to identify the species of fish that consume the seaweeds.

“We hope that this information will inform the Fijians to help them make decisions about fisheries management that could help protect the reefs,” says Rasher. “We hope to give them scientifically guided management tools for maintaining healthy reefs, or for restoring degraded reefs suffering from local human disturbance.”

Coral is affected by both global and local stressors. The global problems, including changing ocean pH and rising temperatures, can’t be controlled locally. But issues such as overfishing and pollution can be controlled, and easing those local stresses may help the coral survive the global challenges.

“It’s becoming clear that the problem for coral is not just one factor,” says Rasher. “The decline of coral reefs results from a complex interaction between many factors. Our study shows that regardless of what factors are driving coral decline, once algae become established, they can suppress the recovery of coral.”

The research has been supported by the National Science Foundation, the National Institutes of Health and the Teasley Endowment at the Georgia Institute of Technology.