U. WASHINGTON (US) — Scientists have known that salmon runs vary by year and by decade, but new research reveals huge cycles in stocks that last up to 200 years.

On the smaller scale, there are 30-year to 80-year booms and busts in salmon runs in Alaska and on the West Coast that are driven by the climate pattern known as the Pacific Decadal Oscillation.

The new research shows that those decadal cycles may overlay even more important, centuries-long conditions, or regimes, that influence fish productivity. 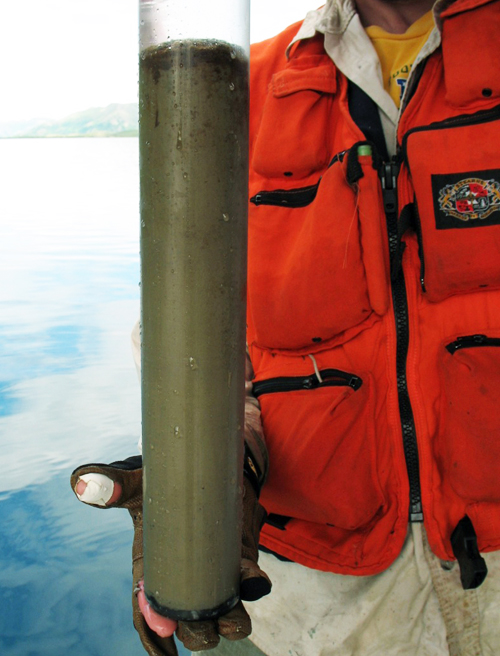 The layers in this sediment core will be analyzed for the isotopic signature of nitrogen that salmon accumulate in the ocean and leave behind in lake sediments when they die: When there’s a lot of such nitrogen, it means returning runs during that time period were abundant. View larger) (Credit: Lauren Rogers/U. Washington)

The researchers found cycles lasting up to 200 years while examining 500-year records of salmon abundance in Southwest Alaska. Natural variations in the abundance of spawning salmon are as large as those due to human harvest.

“We’ve been able to reconstruct what salmon runs looked like before the start of commercial fishing. But rather than finding a flat baseline—some sort of long-term average run size—we’ve found that salmon runs fluctuated hugely, even before commercial fishing started,” says Lauren Rogers, who did this work while earning her doctorate in aquatic and fishery sciences at the University of Washington and is now a post-doctoral researcher with the University of Oslo, Norway.

“That these strong or weak periods could persist for sometimes hundreds of years means we need to reconsider what we think of as ‘normal’ for salmon stocks,” she says.

“Surprisingly, salmon populations in the same regions do not all show the same changes through time. It is clear that the salmon returning to different rivers march to the beat of a different—slow—drummer,” says Daniel Schindler, professor of aquatic and fishery sciences and co-author of the paper, which appears in the early edition of the Proceedings of the National Academy of Sciences.

“The implications for management are profound,” Schindler says. “While it is convenient to assume that ecosystems have a constant static capacity for producing fish, or any natural resource, our data demonstrate clearly that capacity is anything but stationary.

“Management should also allow, and probably even encourage, fishers to move among rivers to exploit salmon populations that are particularly productive. It is not realistic to assume that all rivers in a region will perform equally well or poorly all the time,” he says.

The researchers examined sediment cores collected from 20 sockeye nursery lakes within 16 major watersheds in southwestern Alaska, including those of Bristol Bay.

The scientists homed in on the isotopic signature of nitrogen that salmon accumulate in the ocean and leave behind in lake sediments when they die: When there was a lot of such nitrogen in the sediments, it meant returning runs during that time period were abundant; when there was little, runs had declined.

Climate is not the only reason for long-term changes in salmon abundance. Changes in food webs, diseases, or other factors might be involved; however, at present, there are no clear explanations for the factors that cause the long-term variability observed in this study.

Most, but not all, of the lakes examined showed declines in the kind of nitrogen the scientists were tracking beginning around 1900, once commercial fisheries had developed. However, earlier fluctuations showed that natural processes had at times reduced salmon densities as much as recent commercial fisheries, the co-authors say.

“We expected to detect a signal of commercial fishing—fisheries remove a lot of the salmon, and thus salmon nitrogen, that would have otherwise ended up in the sediments. But we were surprised to find that previous returns of salmon to rivers varied just as dramatically,” Rogers says.

“Interestingly these same fluctuations also highlight that salmon stocks have the capacity to rebuild naturally following prolonged periods with low densities, suggesting a strong resilience of salmon to natural and anthropogenic depletion processes,” write the researchers.

“Indeed, total salmon production (catch plus escapements) has been relatively high in recent years for most sockeye salmon stocks in southwestern Alaska, despite a century of intense harvesting.”

Hidden lake may reveal what Antarctica was like before it froze