INDIANA U. (US) — Natural gas in underground rock layers can seep to the surface—sometimes in quantities abundant enough to produce “eternal flames.”

Researchers say much remains to be learned about these conditions and their contributions to atmospheric concentrations of greenhouse gases. 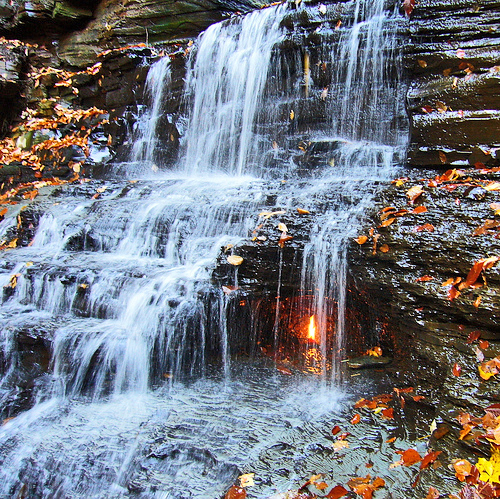 At the New York site, the researchers identified numerous “micro seeps” of gas, apparently from the same source that fuels the eternal flame. This suggests that such seeps, if they are numerous and widespread, could make a significant contribution to atmospheric concentrations of greenhouse gases and other pollutants. (Credit: Linden Tea/Fickr)

“The story is developing,” says Arndt Schimmelmann, senior scientist in the geological sciences department at Indiana University Bloomington and co-author of a report published in the journal Marine and Petroleum Geology.

The study’s lead author, Giuseppe Etiope of the National Institute of Geophysics and Volcanology, has studied eternal flames around the world and says the New York flame is the most beautiful he has seen.

Ethane and propane can be valuable byproducts in the processing of natural gas.

By analyzing the gases and comparing them with gas well records from the region, the researchers concluded the gas fueling the Chestnut Ridge Park flame originates from Rhinestreet Shale, an Upper Devonian formation about 400 meters deep. It reaches the surface through passages associated with faulting caused by tectonic activity.

At the New York site, the researchers identified numerous “micro seeps” of gas, apparently from the same source that fuels the eternal flame.

This suggests that such seeps, if they are numerous and widespread, could make a significant contribution to atmospheric concentrations of greenhouse gases and other pollutants.

The researchers also studied a larger eternal flame at Cook Forest State Park in northwestern Pennsylvania. They determined that flame, in a continuously burning fire pit, is not a natural seep but a leak from an abandoned gas well. The source is thought to be a conventional gas reservoir, not shale.

But finding seeps is like searching for a needle in a haystack.

The stuff of folklore

Last year, the researchers surveyed a region of Kentucky that is geologically similar to western New York—and where “burning springs” figure in local history and folklore—but turned up no evidence of escaping natural gas.

Schimmelmann says researchers have found elevated levels of carbon dioxide in caves, possibly resulting from methane that is converted by microorganisms to carbon dioxide gas as it seeps slowly toward the surface.

Carbon dioxide is also a greenhouse gas, but it is 20 times less effective at trapping heat than methane.

The findings suggest natural gas seeps occur in areas that have experienced tectonic activity, and it may be easier to find them in caves, which capture and concentrate gas when it reaches the surface.

A next step in the research, planned for this summer, is to continue the search in areas of Pennsylvania, West Virginia, and Virginia where gas-bearing shale underlies cave systems.

The US Department of Energy supported the study.