Poachers killed more than 1,000 black and white rhinos last year, and more than 500 have already been lost this year. (Credit: Yoky via Wikimedia Commons) 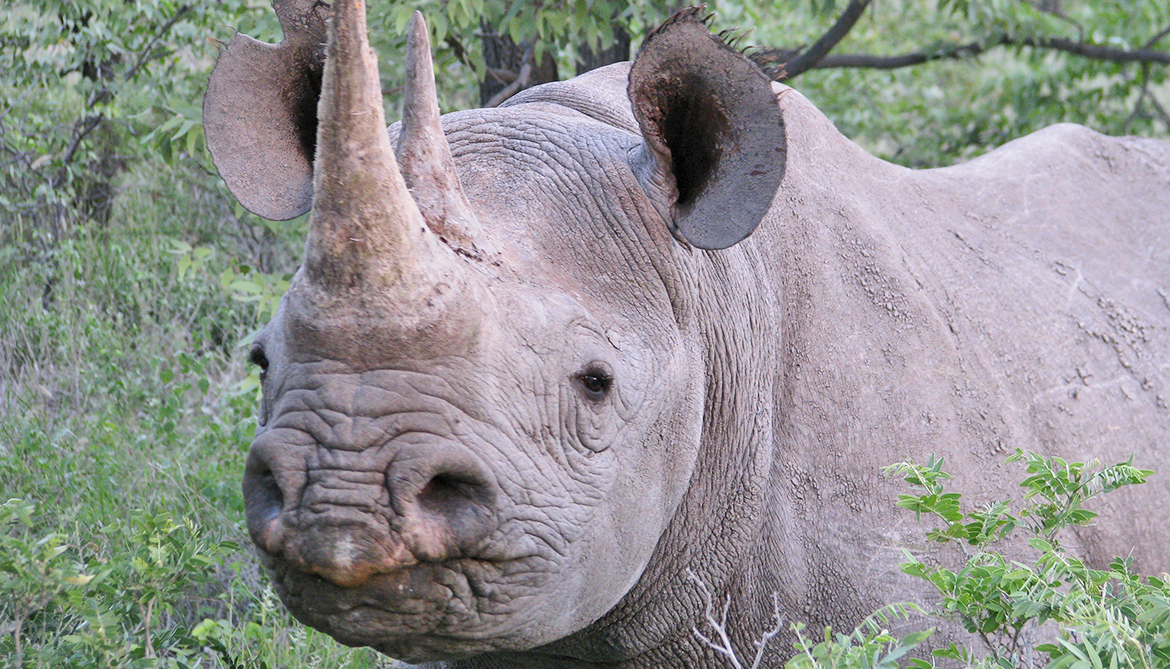 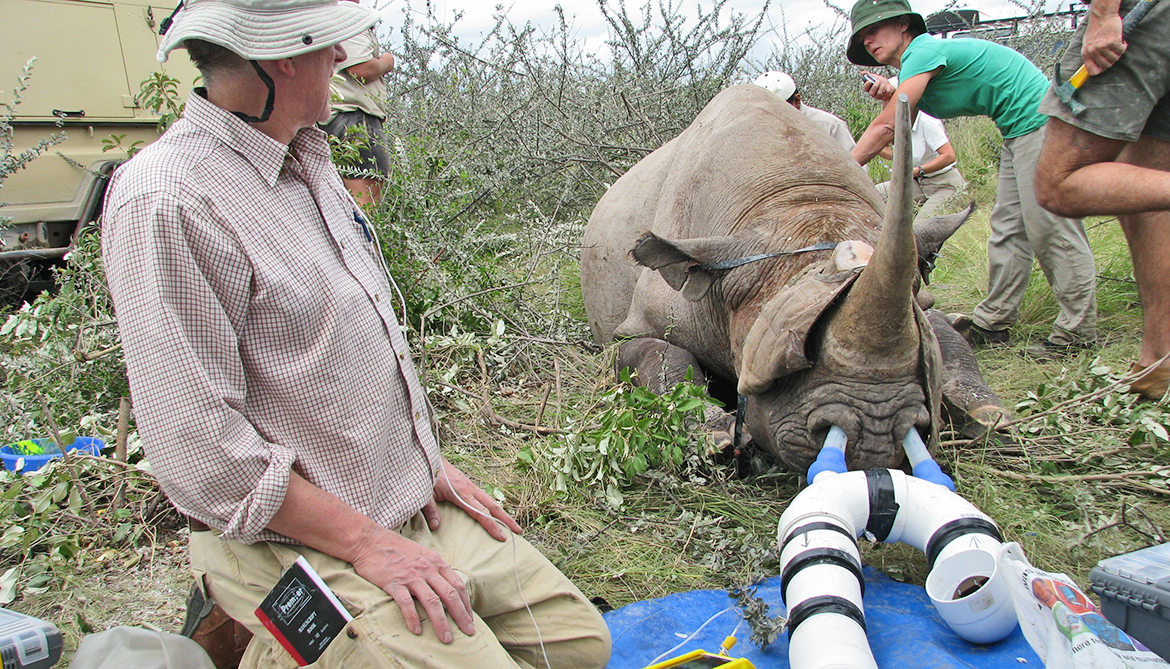 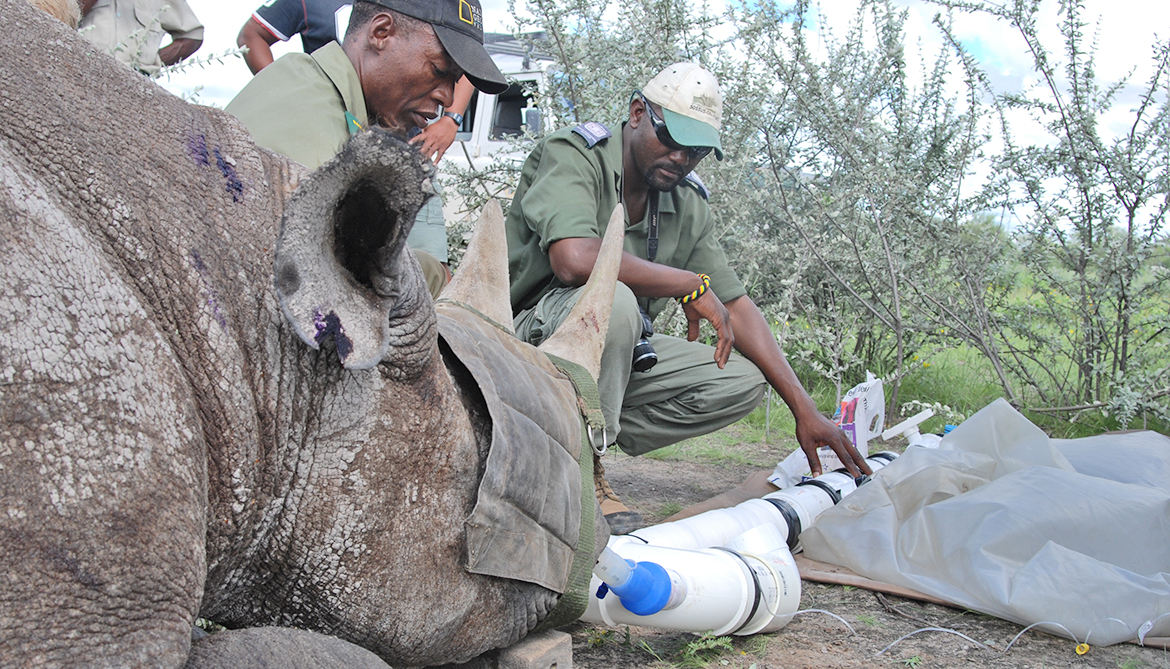 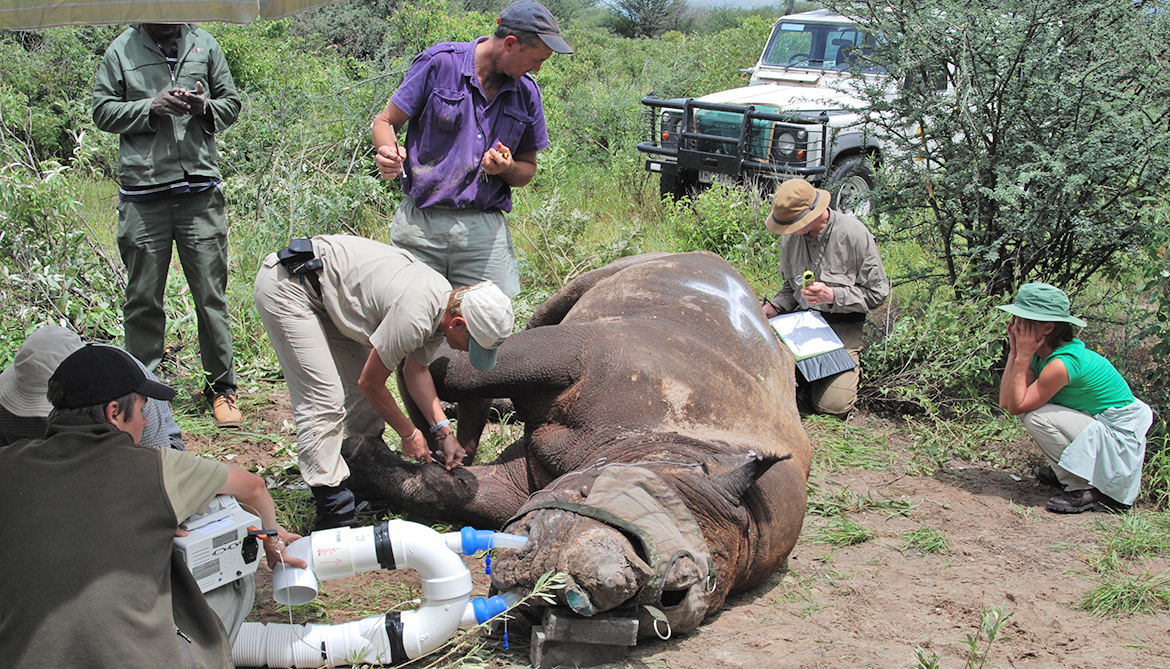 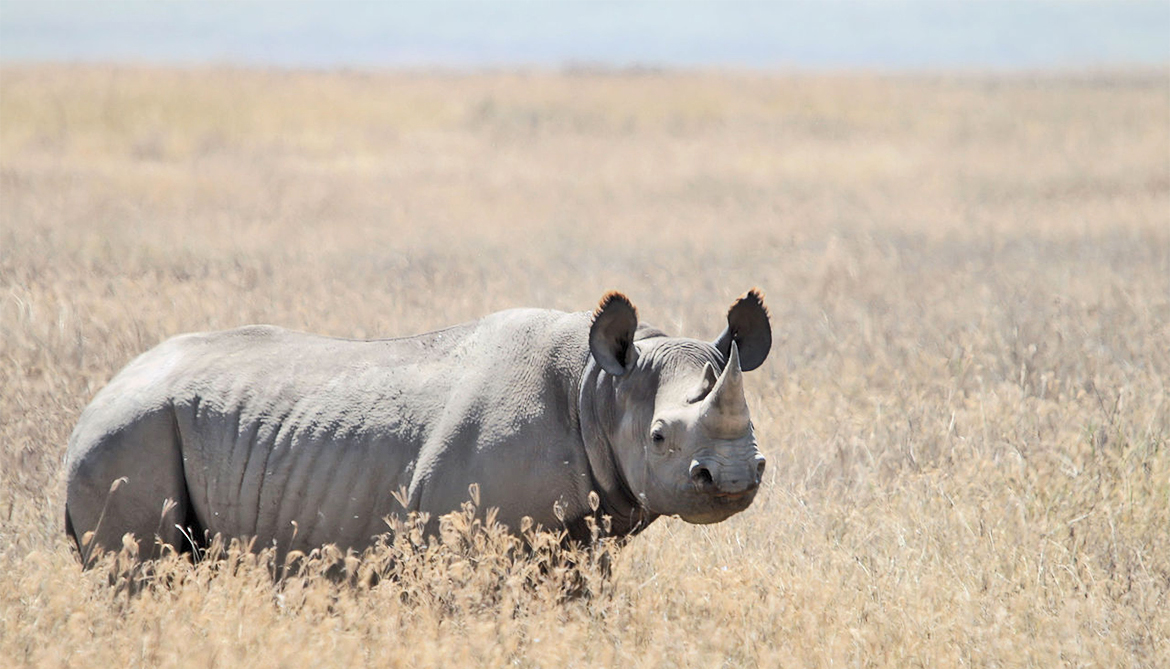 To protect rhinos from poachers, wildlife experts capture and relocate them, but complications from anesthesia kill one or two a year.

Positioning them on their bellies instead of their sides during anesthesia helps them breathe more efficiently and could limit unnecessary deaths, new research shows.

While the number lost is only 1 to 2 percent of the animals moved each year, with only 5,000 or so left in the wild in southern Africa, any loss is too many, scientists say.

“We are trying to improve the success of rhino capture and translocation,” says Robin Radcliffe, adjunct professor of wildlife and conservation medicine at Cornell University’s College of Veterinary Medicine.

To capture rhinos, wildlife managers dart them from helicopters with a large dose of an opioid so the animal will fall down safely and quickly, minimizing injuries that can occur when they attempt to flee.

The opioids are also reversible. This is important because “in the wild, you want to wake the rhino and make sure they are quickly up and mobile,” so they don’t fall victim to lions and other predators, Radcliffe says.

Once anesthetized, wildlife veterinarians often lay the animals on their side because positioning them on their bellies can damage leg muscles. Rhinos breathe faster and deeper on their sides.

A few previous studies had suggested rhinos breathe better on their bellies, but the effects of positioning on lung or heart systems had not been fully studied until now.

In the new study, published in the Journal of Zoo and Wildlife Medicine, researchers designed a system to collect and measure a rhino’s breaths. The system involves cuffed tubes in each nostril, connected to PVC pipes and large collection bags to measure the volume of air moved with each breath (the so called tidal volume) and the total volume of air moved in a minute (minute ventilation).

They also tested blood oxygen levels to determine how much oxygen passed into the blood with each breath.

Though the rhinos appeared to breathe better on their sides, with larger amounts of air entering the lungs in this posture, much of this air doesn’t take part in carbon dioxide and oxygen exchange with the blood and is wasted. When rhinos are on their bellies, gas exchange is much more efficient and, as a consequence, the oxygen levels in the blood are much higher than when they are on their sides.

Future research may address the effects of positioning during anesthesia on the cardiovascular system.

Intentional management of rhinos, including moving them to protected areas away from poachers, reintroducing them to areas where they have been hunted, and relocating them to ensure genetic mixing, is one of the best ways to ensure their survival, Radcliffe says.

Poachers killed more than 1,000 black and white rhinos last year, and more than 500 have already been lost this year.

The Morris Animal Foundation and Kathy Ruttenberg provided funding. The researchers were invited by the Namibian Ministry of the Environment and Tourism to conduct the study.

These bird species are new to science

Focus on ‘umbrella’ species could save more Aussie animals