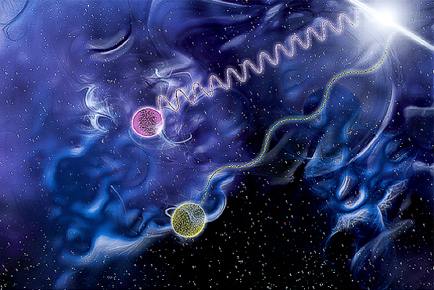 In this illustration, one photon (purple) carries a million times the energy of another (yellow). Some theorists predict travel delays for higher-energy photons, which interact more strongly with the proposed frothy nature of space-time. Yet Fermi data on two photos from a gamma-ray burst fail to show this effect, eliminating some approaches to a new theory of gravity. (Credit: NASA/Sonoma State University/Aurore Simonnet)

STANFORD (US)—Racing across the universe for the last 7.3 billion years, two gamma-ray photons arrived at NASA’s orbiting Fermi Gamma-ray Space Telescope within nine-tenths of a second of one another. The dead-heat finish may stoke the fires of debate among physicists over Einstein’s special theory of relativity because one of the photons possessed a million times more energy than the other.

For Einstein’s theory, that’s no problem. In his vision of the structure of space and time, unified as space-time, all forms of electromagnetic radiation—gamma rays, radio waves, infrared, visible light, and X-rays—are reckoned to travel through the vacuum of space at the same speed, no matter how energetic. But in some of the new theories of gravity, space-time is considered to have a “shifting, frothy structure” when viewed at a scale trillions of times smaller than an electron.

Some of those models predict that such a foamy texture ought to slow down the higher-energy gamma-ray photon relative to the lower energy one. Clearly, it did not.

Even in the world of high-energy particle physics, where a minute deviation can sometimes make a massive difference, nine-tenths of a second spread over more than 7 billion years is so small that the difference is likely due to the detailed processes of the gamma-ray burst rather than confirming any modification of Einstein’s ideas.

“This measurement eliminates any approach to a new theory of gravity that predicts a strong energy-dependent change in the speed of light,” says Peter Michelson, professor of physics at Stanford University and principal investigator for Fermi’s Large Area Telescope, which detected the gamma-ray photons on May 10. “To one part in 100 million billion, these two photons traveled at the same speed. Einstein still rules.”

Michelson is one of the authors of a paper that details the research, published online Oct. 28 by Nature.

Physicists have yearned for years to develop a unifying theory of how the universe works. But no one has been able to come up with one that brings all four of the fundamental forces in the universe into one tent. The Standard Model of particle physics, which was well developed by the end of the 1970s, is considered to have succeeded in unifying three of the four: electromagnetism; the “strong force” (which holds nuclei together inside atoms); and the “weak force” (which is responsible for radioactive decay, among other things.) But in the Standard Model, gravity has always been the odd man out, never quite fitting in. Though a host of theories have been advanced, none has been shown successful.

But by the same token, Einstein’s theories of relativity also fail to unify the four forces.

“Physicists would like to replace Einstein’s vision of gravity—as expressed in his relativity theories—with something that handles all fundamental forces,” Michelson says. “There are many ideas, but few ways to test them.”

The two photons provided rare experimental evidence about the structure of space-time. Whether the evidence will prove sufficient to settle any debates remains to be seen.

The photons were launched on their pan-galactic marathon during a short gamma-ray burst, an outpouring of radiation likely generated by the collision of two neutron stars, the densest known objects in the universe.

A neutron star is created when a massive star collapses in on itself in an explosion called a supernova. The neutron star forms in the core as matter is compressed to the point where it is typically about 10 miles in diameter, yet contains more mass than our sun. When two such dense objects collide, the energy released in a gamma-ray burst can be millions of times brighter than the entire Milky Way, albeit only briefly. The burst (designated GRB 090510) that sent the two photons on their way lasted 2.1 seconds.

NASA’s Fermi Gamma-ray Space Telescope is an astrophysics and particle physics partnership, developed in collaboration with the U.S. Department of Energy, along with important contributions from academic institutions and partners in France, Germany, Italy, Japan, Sweden, and the United States.

Did volcanoes turn Venus into a ‘hellish’ planet?