STANFORD (US) — The queen harvester ant can continue to produce new ants 20 to 30 years after a single mating.

For the first time, Stanford University biologists have been able to identify specific parent ants and their own children in wild ant colonies, making it possible to study reproduction trends.

The findings, published in the online version of the Journal of Animal Ecology, show that in a remarkable display of longevity, an original queen ant was found to be producing new ants several decades after mating, sending out daughter queens throughout her 20- to 30-year lifespan. 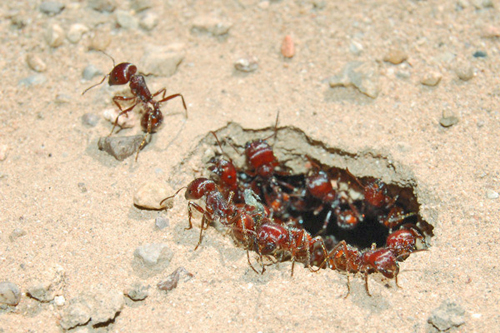 “Most animals produce offspring for a while, and then they enter a life stage where they don’t,” says Deborah Gordon, a biology professor and a senior fellow at the Stanford Woods Institute for the Environment. “These queen ants are mating once, storing that sperm in a special sac, keeping it alive, and using it to fertilize eggs for another 25 years.”

Gordon has been studying a particular population of harvester ant colonies in southeastern Arizona for 28 years, meticulously recording when a new colony rises or an older one falls.

From an ecological viewpoint, an ant colony is much like a tree putting out seeds, with the potential to create new trees.

An ant queen produces genetically identical worker ants that live in the same colony, and also produces sons, and daughter queens. The daughter queens, after mating, establish new colonies of their own.

Gordon’s group took the DNA fingerprint of each colony by analyzing a section of microsatellite, or “junk”, DNA to identify which colonies were related. By pairing the genetic analysis with the long-term observations, Gordon was able to determine the original queen and colony, and the order in which the daughter queens and subsequent generations established new colonies.

The researchers also found that only about 25 percent of the colonies reproduce at all, and many of the daughter queens are not successful. The entire population—the study group consisted of about 300 colonies—relies on just a few queens to make most of the offspring year after year.

“We don’t know whether all harvester ant populations always behave this way, or whether these trends hold true for all 11,000 ant species, because nobody has identified colony offspring before,” Gordon says. “This gives us new insight on how ant populations change over time.”

In general, ants play an important role in agriculture around the world, with some helping to disperse seeds while others eat herbivorous insects. Understanding how populations of ant colonies reproduce and expand, and the rate at which they do so, could be useful in managing invasive ant species, predicting crop yields, and understanding the ecology of tropical forests.