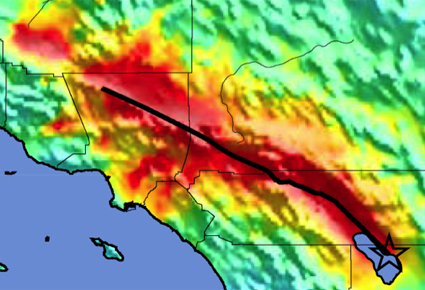 The 2008 ShakeOut scenario and a follow-up 2009 exercise involving more than 5 million Californians participating in “drop, cover and hold on” earthquake drills and other planning events were huge successes, causing the USGS and collaborators to make the ShakeOut an annual event, says Keith Porter. Map above indicates areas of strongest ground shaking (red) on the southern San Andreas fault. (Courtesy: www.shakeout.org)

U. COLORADO (US)—Researchers who devised the largest earthquake preparedness event ever undertaken in the United States say one of the biggest challenges was translating devastation projections from a hypothetical magnitude 7.8 San Andreas Fault temblor into timely, usable information to the more than 5 million California participants in 2008.

“One of the biggest challenges of the ShakeOut was to get scientists to speak the language of citizens,” says Keith Porter, a University of Colorado at Boulder research professor. “While many researchers were concerned about advancing the state of science through different modeling scenarios and debate, the citizens made it clear to us they needed the big picture.”

Known as the Great Southern California ShakeOut, the event was designed by more than 300 experts in fields including earth sciences, engineering, policy, economics, and public health, says Porter, who coordinated estimates of physical damages in the scenario.

He says the interests of the scientists—including high-tech research and state-of-the-art projections—did not always coincide with concerns of the general public and emergency preparedness planners looking for timely, simple information on issues.

Porter gave a presentation on the subject at the 2010 meeting of the American Association for the Advancement of Science held Feb. 18-22 in San Diego. Porter’s talk was part of a session titled “Earthquake Science and Advocacy: Helping Californians Live Along the San Andreas Fault.” The Great Southern California ShakeOut event was led by the U.S. Geological Survey.

Pushing the limits of science, including efforts like the ShakeOut, almost invariably creates a lack of consensus among scientists that can cause confusion in the public sector leading to “ambiguity aversion”—preference by people to deal with known risks and to avoid dealing with risks where there is significant disagreement about the level of uncertainty, says Porter.

“We found these people needed a single, discreet story, which led us to explore and present what we thought was a single, realistic outcome of the hypothetical earthquake, as opposed to a discussion of possible outcomes,” he adds

The 2008 ShakeOut scenario and a follow-up 2009 ShakeOut exercise involving more than 5 million Californians participating in “drop, cover and hold on” earthquake drills and other family, school and organizational emergency plans were huge successes, causing the USGS and collaborators to make the ShakeOut an annual event, Porter notes.

“Our hope is the activities undertaken by participants will become second nature,” he says. “In a sense it is similar to people taking CPR courses annually to keep up to speed.”

The USGS team that created the ShakeOut is now creating an emergency preparedness scenario known as ARkStorm to simulate the outcome of a series of massive West Coast storms similar to those that pounded California in 1861 and 1862. Those storms lasted for 45 days, flooded vast areas of northern and southern California, submerged a swath of the Sacramento and San Joaquin valleys 300 miles long and up to 60 miles wide and inundated large areas of Los Angeles and Orange counties.

Such storms draw heat and moisture from the tropical Pacific Ocean, forming “atmospheric rivers” that cause damage on the same scale of earthquakes and are projected to become more intense as a result of climate change, says Porter.

Porter is leading the ARkStorm team that is assessing the potential outcome from such a storm in terms of physical damages, repair costs and the restoration time for buildings, dams, levees, harbors, bridges, roads, water supply systems, and electric power.

Baby talk may prep infants to produce their own speech

‘Supportive voices’ get picked for teams at work