High-energy X-rays streaming from a rare and mighty pulsar (magenta), the brightest found to date, can be seen in this new image combining multi-wavelength data from three telescopes. (Credit: NASA/JPL-Caltech/SAO/NOAO) 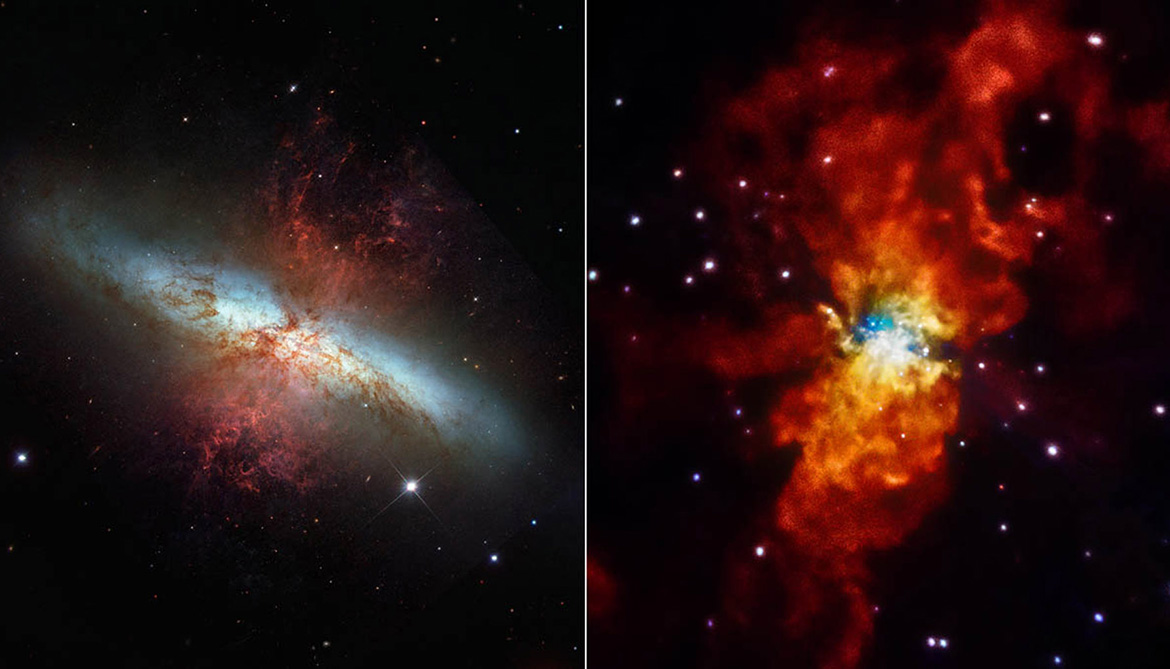 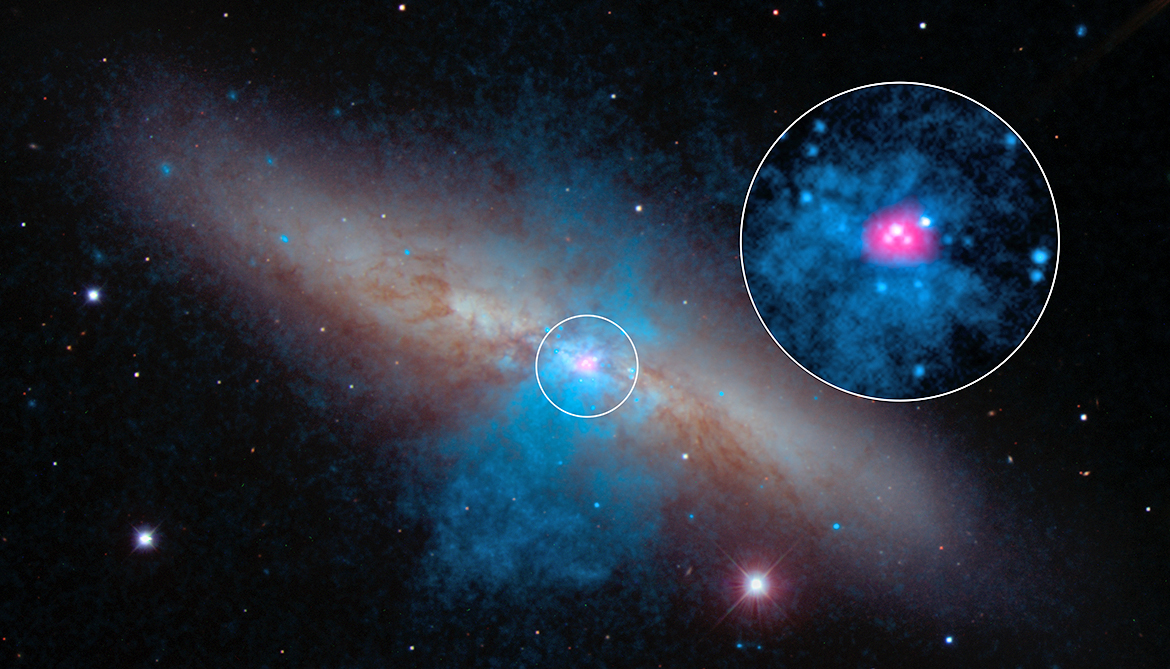 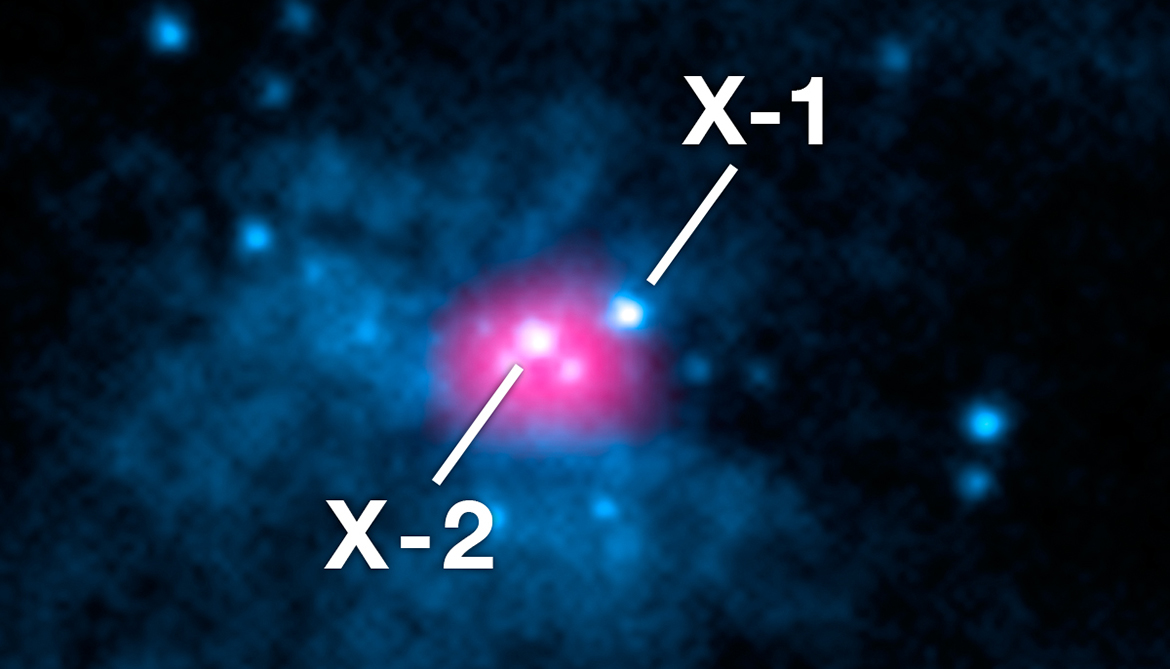 An object scientists thought was a black hole is actually the brightest and weirdest pulsar ever detected.

“We’ve never seen anything quite like it. We all thought an object with that much energy had to be a black hole.”

With its extreme energy, this pulsar takes the top prize in the weirdness category, says Dom Walton, a postdoctoral scholar who works with NuSTAR data.

Pulsars are typically between one and two times the mass of the sun. The new pulsar presumably falls in that same range but shines about 100 times brighter than theory suggests something of its mass should be able to.

“We’ve never seen a pulsar even close to being this bright,” Walton says. “Honestly, we don’t know how this happens, and theorists will be chewing on it for a long time.” Besides being weird, the finding will help scientists better understand a class of very bright X-ray sources, called ultraluminous X-ray sources (ULXs).

NuSTAR’s detection of this first ultraluminous pulsar is described in a paper published in the current issue of Nature.

“This was certainly an unexpected discovery,” says Harrison. “In fact, we were looking for something else entirely when we found this.”

Earlier this year, astronomers in London detected a spectacular, once-in-a-century supernova (dubbed SN2014J) in a relatively nearby galaxy known as Messier 82 (M82), or the Cigar Galaxy, 12 million light-years away. Because of the rarity of that event, telescopes around the world and in space adjusted their gaze to study the aftermath of the explosion in detail.

Besides the supernova, M82 harbors a number of other ULXs. When Matteo Bachetti of the Université de Toulouse in France, the lead author of the new paper, took a closer look at these ULXs in NuSTAR’s data, he discovered that something in the galaxy was pulsing, or flashing light.

“That was a big surprise,” Harrison says. “For decades everybody has thought these ultraluminous X-ray sources had to be black holes. But black holes don’t have a way to create this pulsing.”

But pulsars do. They are like giant magnets that emit radiation from their magnetic poles. As they rotate, an outside observer with an X-ray telescope, situated at the right angle, would see flashes of powerful light as the beam swept periodically across the observer’s field of view, like a lighthouse beacon.

Not a black hole

The reason most astronomers had assumed black holes were powering ULXs is that these X-ray sources are so incredibly bright. Black holes can be anywhere from 10 to billions of times the mass of the sun, making their gravitational tug much stronger than that of a pulsar.

As matter falls onto the black hole the gravitational energy turns it to heat, which creates X-ray light. The bigger the black hole, the more energy there is to make the object shine.

Surprised to see the flashes coming from M82, the NuSTAR team checked and rechecked the data. The flashes were really there, with a pulse showing up every 1.37 seconds.

The next step was to figure out which X-ray source was producing the flashes. Researchers analyzed the data from NuSTAR and a second NASA X-ray telescope, Chandra, to rule out about 25 different X-ray sources, finally settling on a ULX known as M82X-2 as the source of the flashes.

With the pulsar and its location within M82 identified, there are still many questions left to answer. It is many times higher than the Eddington limit, a basic physics guideline that sets an upper limit on the brightness that an object of a given mass should be able to achieve.

“This is the most extreme violation of that limit that we’ve ever seen,” says Walton. “We have known that things can go above that by a small amount, but this blows that limit away.”

NuSTAR is particularly well-suited to make discoveries like this one. Not only does the space telescope see high-energy X-rays, but it sees them in a unique way. Rather than snapping images the way that your cell-phone camera does—by integrating the light such that images blur if you move—NuSTAR detects individual particles of X-ray light and marks when they are measured. That allows the team to do timing analyses and, in this case, to see that the light from the ULX was coming in pulses.

Now that the NuSTAR team has shown that this ULX is a pulsar, Harrison points out that many other known ULXs may in fact be pulsars as well.

“Everybody had assumed all of these sources were black holes,” she says. “Now I think people have to go back to the drawing board and decide whether that’s really true. This could just be a very unique, strange object, or it could be that they’re not that uncommon.

“We just don’t know. We need more observations to see if other ULXs are pulsing.”