U. ARIZONA / YALE (US) — Researchers are closer to fine-tuning inflammation, thanks to the discovery of a protein already used as a primary defense in the body’s immune system.

A team of researchers has discovered a previously unknown mechanism that prevents the immune system from going into overdrive, shedding light not only on how our body controls its response to pathogens but on conditions such as autoimmune diseases, allergies, and chronic inflammation as well. 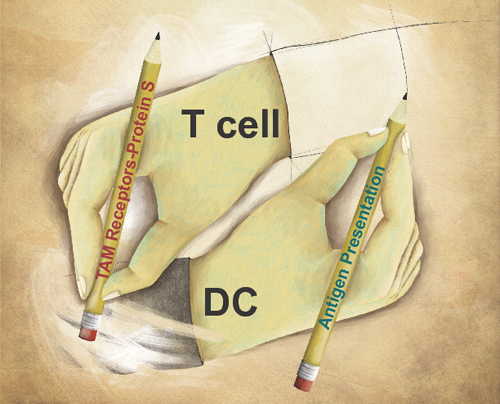 The group found a protein previously believed to only play a role in blood clotting acts as a negative feedback signal, telling defense cells to calm down, thereby preventing an immune reaction from spiraling out of control. The results, which could lead to new therapeutics for a variety of disorders caused by a faulty immune response, are published in the journal Immunity.

When pathogens such as viruses or bacteria invade our body, the immune system reacts by producing a flurry of chemical signals, known as chemokines that act as a bugle call recruiting specialized defender cells to the scene, such as macrophages, which devour the intruders. This first line of defense is known as inflammation.

“Inflammation is a necessary defense mechanism—you can’t live without it,” says Sourav Ghosh, assistant professor in the department of cellular and molecular medicine at the University of Arizona’s College of Medicine and lead author of the study. “On the flip side, if you can’t regulate the inflammation, it can damage the body.”

To be effective against pathogens, yet prevent collateral damage from the body’s own defenses, the immune system has to maintain just the right level of inflammation, explains Ghosh, who is also a member of the university’s Cancer Center and the BIO5 Institute.

“It needs to be not too high and not too low,” he says. “The question had always been how does the immune system maintain that balance? Our discovery explains this.” 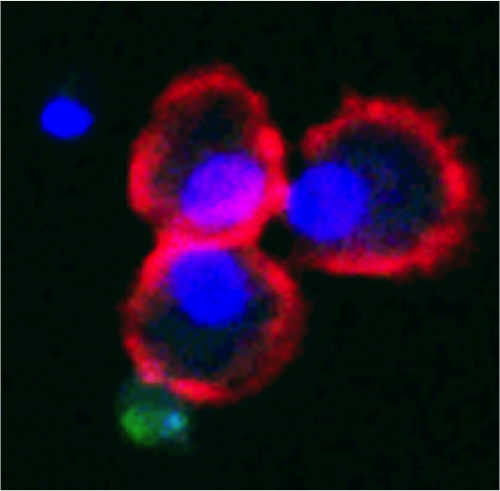 In this microscopic image, three cells of the innate immune response (red with blue cell nuclei) are seen next to two T-cells. T-cells appear blue when they’re not active. Only when they make contact with and are activated by the innate cells do the T-cells turn on Protein S, causing them to glow green. (Credit: Lidia Bosurgi)

All organisms, even plants, have some kind of immune system at their disposal that acts as an army fighting against the onslaught of microbes, viruses, parasites, and other pathogens in the environment. Vertebrates have evolved the most sophisticated arsenal of “soldiers” and “weapons,” relying on two powerful lines of defense: a non-specific, or innate, immune response and the specific, or adaptive, immune response.

In the non-specific response, the immune system throws a first wave of countermeasures at the intruders, consisting of—among other things—aggressive chemicals, destructive enzymes, and kamikaze-like neutrophils, specialized white blood cells that destroy the attackers by devouring them, killing themselves in the process.

“First you don’t know who the enemy is, so you fire everywhere with your eyes closed,” Ghosh explains. “But once you know the enemy, you need to shut off this first response firing and bring in the special ops so to speak.”

The special ops come in the form of the specific immunity, capable of targeting pathogens very precisely, taking out the enemy in a sniper-like fashion, while sparing friendly microbes and cells belonging to the body. Most importantly, this portion of the immune system contains cells that remember every attacker trying to conquer an organism throughout its lifetime, allowing the immune system to summon the most effective, specialized task force to counter a pathogen it recognizes from a previous battle.

“The innate immune response is necessary to activate the adaptive response,” Ghosh says. “But once activated, there has to be a mechanism that prevents the adaptive response from going into overdrive. From previous studies, we knew there had to be some kind of signal that does this, but we didn’t know the nature of that signal. Now we do.”

Two kinds of immune cells turned out to be the key players in mediating the immune response: the dendritic cells, which belong to the first wave of defense; and the T-cells, so named because they mature in the thymus gland, which are part of the second wave, the specific immune response.

“The dendritic cells activate the T-cells,” Ghosh explains. “Only when they’re activated, not when they’re resting, do the T-cells produce this protein that we knew only from the blood clotting process, called Protein S.”

“We thought about which cells could be the source of that signal,” says Carla Rothlin of the School of Medicine at Yale University, who led the study together with Ghosh. “You don’t want to put the brakes on from the very beginning, or otherwise the immune response would never amount to anything. But you want to slow it down once it starts going too fast.”

“We figured that once the specific response is underway, you don’t really need the unspecific response anymore, so the T-cells appeared to be the best candidates for the source of this signal.”

To test their hypothesis, the researchers studied the immune response in mice in which the gene coding for Protein S had been deactivated selectively in their T-cells, rendering them unable to communicate with the dendritic cells.

As expected, these mice were unable to regulate their immune response, resulting in higher levels of inflammation compared to their normal counterparts.

To assess the relevance of their findings to humans, Ghosh and colleagues then studied blood from patients with inflammatory bowel diseases such as ulcerative colitis and Crohn’s disease. Consistent with their previous results, patients suffering from increased inflammation had lower levels of Protein S in their blood stream compared to healthy volunteers.

The findings could help scientists and clinicians develop better treatments for inflammatory diseases, for example by designing drugs that substitute for insufficient Protein S. According to Ghosh, patients with inflammatory bowel disease are 20 times more likely to develop colon cancer, further underlining the significance of this study.

Study co-author Jonathan Leighton reports anecdotal evidence from the clinical practice that is in line with the dual roles Protein S is believed to play. “Patients with inflammatory bowel disease can develop blood clots if they have active disease,” says Leighton, chair of the division of gastroenterology at Mayo Clinic.

“No one has found a consistent inflammatory pathway that explains all the clinical manifestations, and it may be that different pathways are affected in different patients. We don’t understand how it all relates quite yet, but this study is a step toward a better understanding that will ultimately help us treat patients more effectively.”