YALE (US) — A flightless prehistoric bird used its own wings like nunchucks in combat with foes, researchers have discovered.

Xenicibis, a member of the ibis family that lived about ten thousand years ago and was found only in Jamaica, most likely used its specialized wings like a flail, swinging its upper arm and striking its enemies with its thick hand bones. Details are reported in the Proceedings of the Royal Society B.

“No animal has ever evolved anything quite like this,” says Nicholas Longrich of Yale University, who led the research. “We don’t know of any other species that uses its body like a flail. It’s the most specialized weaponry of any bird I’ve ever seen.”

As part of the new study, the researchers analyzed a number of recently discovered partial skeletons of Xenicibis and found that the wings were drastically different from anything they’d seen before. “When I first saw it, I assumed it was some sort of deformity,” Longrich says. “No one could believe it was actually that bizarre.” 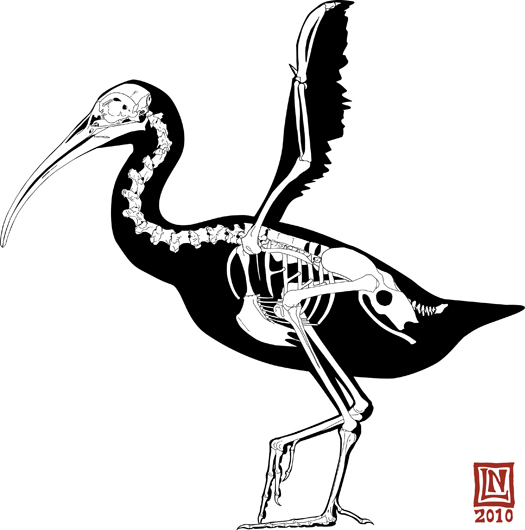 A reconstruction of the bird’s skeleton based on fossils discovered in Jamaica. (Credit: Nicholas Longrich, Yale University)

Xenicibis wing bones. (Credit: Longrich and Olson, Proceedings of the Royal Society B.)

The bird, which was the size of a large chicken, is anatomically similar to other members of the ibis family except for its wings, which include thick, curved hand bones unlike those of any other known bird. Xenicibis also had a much larger breastbone and longer wings than most flightless birds. “That was our first clue that the wings were still being used for something,” Longrich says.

While other birds are known to punch or hammer one another with their wings, Xenicibis is the only known animal to have used its hands, hinged at the wrist joint, like two baseball bats to swing at and strike its opponents. Although modern day ibises do not strike one another in this fashion, they are very territorial, with mates often fighting other pairs over nesting and feeding rights.

It’s also possible that the birds used their club-like wings to defend themselves against other species that might have preyed on the birds’ eggs or young. Xenicibis is unusual in that it became flightless even in the midst of a number of predators, including the Jamaican yellow boa, a small extinct monkey and over a dozen birds of prey.

The team found that two of the wing bones in the collection showed evidence of combat, including a fractured hand bone and a centimeter-thick upper arm bone that was broken in half. The damage is proof of the extreme force the birds were able to wield with their specialized wings, Longrich says.

Other authors of the paper include Storrs Olson from the National Museum of Natural History, Smithsonian Institution.