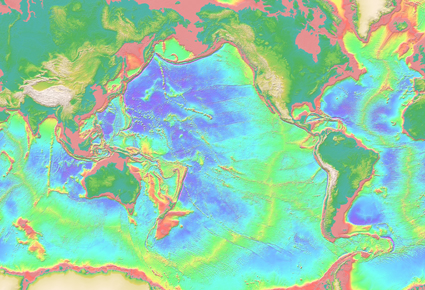 A new model uses measurements from mid-ocean ridges (yellow and green) to precisely describe the movements of interlocking tectonic plates that make up about 97 percent of Earth’s surface. “We live on a dynamic planet, and it’s important to understand how the surface of the planet changes,” says Richard Gordon. (Credit: D. Sandwell/Scripps Oceanography and W.H.F Smith/NOAA)

RICE (US)—A research team has put the finishing touches on a 20-year labor of love: a precise description of the relative movements of the interlocking tectonic plates that account for about 97 percent of Earth’s surface.

The 25 tectonic plates that form Earth’s surface are rigid, but they are in constant motion because they float atop the planet’s interior. The plates constantly grind together and slide past one another. When two plates crash into each other, they form mountain ranges like the Himalayas. When they slide past one another, they cause earthquakes like the one that struck Haiti this year.

“We live on a dynamic planet, and it’s important to understand how the surface of the planet changes,” says Richard Gordon, W.M. Keck Foundation Chair in Geophysics at Rice University. “The frequency and magnitude of earthquakes depend upon how the tectonic plates move. Understanding how plates move can help researchers understand surface processes like mountain-building and subsurface processes like mantle convection.”

The new model of Earth, dubbed “MORVEL” for “mid-ocean ridge velocities,” was developed by Gordon and longtime collaborators Chuck DeMets of the University of Wisconsin-Madison and Donald Argus of NASA’s Jet Propulsion Laboratory in Pasadena, Calif.

A paper describing MORVEL is available online and due to appear in next month’s issue of Geophysical Journal International. In creating the new model, DeMets, Gordon, and Argus are essentially one-upping themselves: Their 1990 paper on tectonic plate velocities has been cited more than 2,000 times by other scientists.

“At the time that one came out, Chuck and I were out on an airplane in the Indian Ocean collecting more than 60,000 kilometers of new magnetic profiles south and southwest of the Maldives,” Gordon says. “At that point, we’d already decided to do another model, but we didn’t want to do one that was just an incremental improvement. To make it worthwhile, it had to be a whole lot better, and that’s why it took so long.”

Gordon said MORVEL offers a marked improvement on the previous work they did because it’s based on more—and more precise—data, like the profiles he and DeMets collected in the Indian Ocean in 1990.

“This model can be used to predict the movement of one plate relative to any other plate on the Earth’s surface,” says lead author DeMets. “Plate tectonics describes almost everything about how the Earth’s surface moves and deforms, but it’s remarkably simple in a mathematical way.”

About three-quarters of the MORVEL data come from Earth’s mid-ocean ridges, undersea boundaries between tectonic plates. At these ridges, new crust forms constantly as magma wells up from beneath the planet’s surface while the plates spread apart.

To judge how fast the plates are spreading, the team uses data from scanners that look at the magnetic profile of the crust that’s formed at mid-ocean ridges. When Earth’s magnetic field changes polarity, it leaves a magnetic mark in the crust that’s akin to a tree ring. These polarity changes occur at irregular intervals—the last being about 780,000 years ago. By matching up the marks from the polarity shifts at different points along mid-ocean ridges worldwide, the team can judge how quickly new crust is being formed.

MORVEL’s a study in contrasting scales. It estimates exactly how fast plates are spreading apart along mid-ocean ridges. These rates are typically a few inches a year at most. And MORVEL does this for plate boundaries along a continuous string of mid-ocean ridges more than 40,000 miles long.

Twenty years ago, DeMets, Argus and Gordon used spreading rates that were based on magnetic reversal timescales developed from potassium-argon dating, but more precise methods have since been developed. Using the newer data, the team was able to improve the resolution of its model, particularly in parts of the world where plates are spreading the fastest.

A second study by Argus, Gordon and other colleagues, which was also years in the making and which appears in this month’s issue of Geophysical Journal International, offers additional information that can help refine scientists’ estimates of how Earth’s surface is evolving. In that study, the group used new data to refine best estimates for the exact position of Earth’s center. In examining the movement of tectonic plates based upon data from Global Positioning System satellites, satellite laser ranging, and similar methods, scientists must consider how the planet is rotating and where its center of mass lies.

“Don came up with a bunch of criteria to try to find out what the center of Earth is doing, and this paper resulted from that,” Gordon says. “The kinds of differences we’re talking about are corrections of about 2 millimeters a year on how the center of Earth moves with time. It may not sound like much, but at the level of accuracy that we’re operating, that 2 millimeters matters.”

The research was supported by the National Science Foundation and NASA.

Why Iceland’s volcanic activity is so special