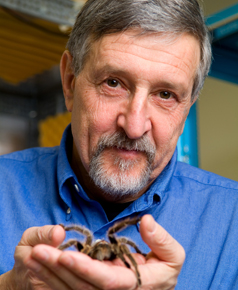 Fredrick Sachs and colleagues have discovered a peptide in tarantula venom that may prove effective as a therapy for muscular dystrophy and other medical conditions. In tests with mice, the peptide increased muscle strength without causing negative side effects.

Fredrick Sachs, professor of physiology and biophysics at the University at Buffalo, and colleagues in his laboratory, discovered the peptide, called GsMTx4. They have formed a start-up biotech company in Buffalo, N.Y.—Rose Pharmaceuticals—to advance the drug to clinical trials.

Therapies for muscular dystrophy are classed as “orphan drugs” by the FDA, allowing a shorter testing period than normal drugs. Sachs says he anticipates Rose Pharmaceuticals may be able to obtain FDA approval of the peptide for human use within two years.

The new company is named for “Rose,” the pet tarantula that has been in residence in Sachs’ lab for nearly 20 years.

The first target of the peptide is MD, a condition Sachs has been investigating for several years, but the peptide also has potential as a therapy for several other conditions, such as neuropathic pain and atrial fibrillation.

In collaboration with Eric Hoffman, director of the Wellstone Muscular Dystrophy Center at Children’s National Medical Center in Washington, D.C., the team tested the effect of GsMTx4 on MD mice extensively. Results showed that the drug increased muscle strength and caused no mortality, morbidity, or toxicity.

Rose Pharmaceuticals now is concentrating on developing methods to administer the drug. The peptide and its mirror image are covered by U.S. patents obtained by UB’s Office of Science, Technology Transfer and Economic Outreach, and licensed to Rose Pharmaceuticals. Sachs notes that there are no other drugs known to act specifically on mechanosensitive ion channels, the target of GsMTx4.

“Unlike most drugs, GsMTx4 seems to generate only positive side effects,” says Sachs. “In addition to its effectiveness in MD, it inhibits atrial fibrillation, a cardiac arrhythmia that affects 2 million Americans, and for which there currently is no reliable drug therapy.

“In a second application, research groups in Korea and UC San Francisco have shown that GsMTx4 can inhibit mechanically induced pain (pain originating in nerve fibers),” he adds. “This therapy is at least half as effective as morphine, but does not act on the brain, only at the site of increased sensitivity.”

GsMTx4 appears to have additional applications. Robert Plunkett, UB associate professor of neurosurgery, has shown that the peptide stimulates neuronal growth, and may be useful for the treatment of Parkinson’s disease. Collaboration with Seth Alper, professor of medicine at Harvard Medical School, showed that GsMTx4 also may be an effective therapy for sickle cell anemia, says Sachs.