"The amount of data that is being collected is astonishing and problematic," Stephen Wicker writes. "Were the data simply thrown away after being used to route calls or improve network performance, I would not be writing this book." View an in-depth discussion of the book here. (Credit: Rocky Lubbers/Flickr)

If you carry a smartphone, the world can spy on you.

Surveillance is a fundamental part of the cellular network, writes Stephen Wicker in his new book Cellular Convergence and the Death of Privacy. But Wicker says there are ways to change the system and to reclaim privacy.

The term “cellular convergence” refers to the fact that more and more of our activities are being managed through that little flat box. That’s “wonderful,” says Wicker, a professor of electrical and computer engineering at Cornell University, “but we must be aware that cellular is also a surveillance technology.”

The book was written before the current eruption of criticism over spying by the National Security Agency (NSA) but, Wicker says, “The NSA has simply been caught taking advantage of the vulnerabilities that I discuss in the book. [The publicity] gives us a chance to have an open democratic debate about the surveillance.” 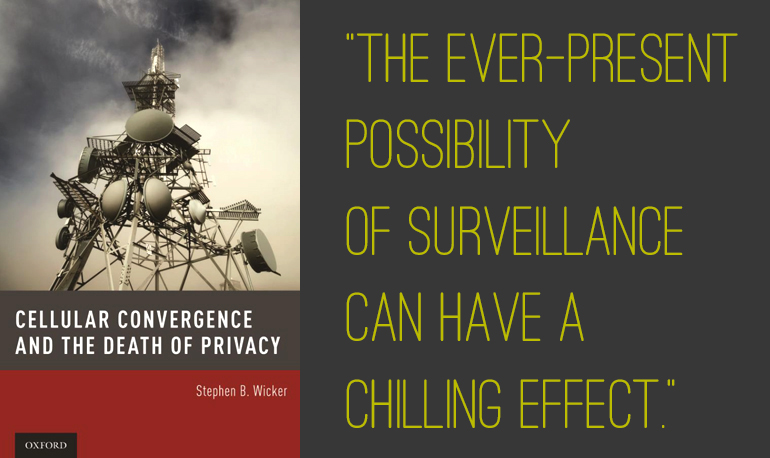 To route incoming calls to the handset, the phone company keeps track of the cell towers that are nearby. Location-based apps keep even more refined data, constantly triangulating from cell towers and reading GPS location information.

To monitor performance it logs that data, and thanks to recent court decisions it can make the logs available to law enforcement without a warrant.

Service providers might also sell the data to commercial enterprises to use in targeting advertisements, and not just the ones that invite you to a restaurant nearby. Knowing where you go, down to the level of street addresses, can reveal a lot: your job, your religion, food preferences, what kind of car you drive, where your kids go to school, and which medical specialists you visit, to name just a few possibilities.

The lack of concern over “metadata,” Wicker says, ignores the vast amount of information context can reveal.

“The amount of data that is being collected is astonishing and problematic,” Wicker writes. “Were the data simply thrown away after being used to route calls or improve network performance, I would not be writing this book.”

[related]
After explaining the technology, Wicker reviews the tangled history of communications law and politics, from the wiretapping of early telegraph lines to the Patriot Act passed after the September 11 attacks, which required communications providers to collect and store an array of information and make it available to the government.

Along with eroding privacy, he adds, government action or inaction has seriously slowed the progress of cellular communications.

He draws on philosophers and psychologists to argue that privacy is a “right,” because it is essential to the development of personality. And while mobile phones have vastly expanded the potential for personal expression, he points out, the ever-present possibility of surveillance can have a chilling effect.

“It is time to remove the impediments and let cellular technology achieve its full promise,” Wicker writes.

Screens are a risky fix for preschoolers’ big feelings