U. MISSOURI (US) — Exposure to the chemical pollutant PCB takes a toll on turtles, stunting growth and lowering bone density, according to a new study that could offer insight on how PCBs affect humans.

Manufactured until 1977 and banned by the Environmental Protection Agency in 1979, pentachlorobiphenyls (PCBs) are chemicals that because they break down so slowly, are still found in the environment.

“Turtles also are known as an ‘indicator species’ because they are often used as a gauge for the health of an entire ecosystem,” says Dawn Holliday, assistant professor of biology at Westminster College in Fulton, Mo. “By finding the effects of PCBs on turtles, we can understand possible effects the chemicals might have on humans.” 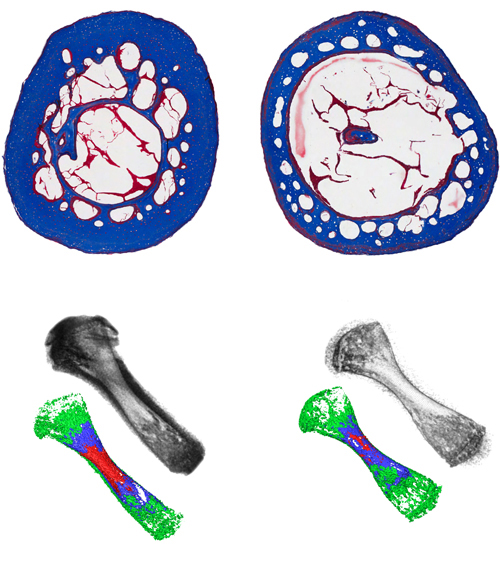 Turtles exposed to PCBs had lower bone density (right) and were smaller than their peers. (Credit: University of Missouri)

Researchers studied PCB 126, a version of the chemical compound once used in pesticides and electric transformers. PCBs are absorbed by eating exposed animals or drinking exposed water and are stored in fat cells. They can affect the endocrine system and the regulation of hormones that control growth and other body functions.

It is known that people harbor PCBs in several tissues; but little is known about the effect the chemicals have on people. Previous research on people accidentally exposed to the chemical through spills or accidents has shown correlations between exposure and stunted growth in humans.

“By studying the effect of PCB exposure on turtles, we can better understand how PCB exposure impacts people,” says Casey Holliday, assistant professor of anatomy at the University of Missouri.

“People are high on the food chain, and thus more susceptible to accumulation of PCBs. Smaller animals ingest PCBs. As large animals eat these smaller animals, the chemical stays in the food chain, as it is deposited in fat cells and doesn’t leave the body. Even people not directly exposed to extreme amounts of PCB may see effects; this research will help us understand these effects better.”

For the study, published in the journal Aquatic Toxicology, turtles were exposed to an amount of PCB 126 that was equivalent to the exposure the reptiles would experience in an urban aquatic environment, such as the mid-Atlantic’s Chesapeake Bay or Louisiana’s wetlands.

The turtles were exposed to the chemical for six months, and were compared to a control group kept in the same laboratory. Exposed turtles were smaller, had more juvenile features, and lower bone density. Previous research has shown that PCB-exposed turtles have a lower metabolic rate.

When diving for long periods of time, turtles store calcium in their shells to help maintain a normal physiological state while holding their breath. Lower bone density means less calcium, possibly resulting in a reduced ability to stay underwater for very long.

Additionally, turtles with low bone density may produce eggs with thinner shells, leaving them more susceptible to predators. Lower density may result in a softer shell, enabling more predators to eat turtles. Affected turtles may also have difficulty eating hard prey, such as crabs, because the reptiles have smaller, weaker jaws and cannot easily crack shells.

More news from the University of Missouri: http://munews.missouri.edu/