U. VIRGINIA (US) — A digital recreation of lost structures at Monticello brings parts of Thomas Jefferson’s home back to life for visitors.

As hundreds of people visit Monticello on Wednesday to explore Jefferson’s historic plantation, there will be several new structures to see, thanks to the work of Earl Mark, a professor in the University of Virginia School of Architecture. 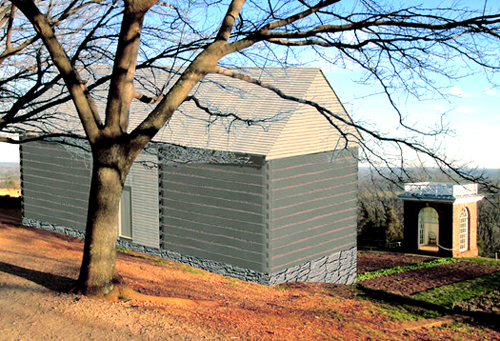 This digital model of the smokehouse/dairy shows the recreation in the context of a photograph of its original location on Mulberry Row at Monticello. (Credit: Digital Re-Creation by U. Virginia Professor Earl Mark courtesy of the Thomas Jefferson Foundation at Monticello)

His work builds upon 50 years of research by the Thomas Jefferson Foundation, Monticello, archaeologists, and historians.

A website devoted to Mulberry Row and the understanding of the landscape of slavery at Monticello includes portions of the digital reconstructions for the smokehouse/dairy, the servants’ houses, and the storehouse for iron.

Mark is working on a Mulberry Row smartphone app that will include re-construction for each of the five sites for which he created digital models, allowing exploration from various angles. It will include images of Jefferson’s farm book, biographical sketches and letters and other documentation and artifacts, all accompanied by audio.

As visitors walk the site, the information will be triggered by geo-referencing the location. The app is expected to launch this summer.

“It’s a way for visitors to be active learners and to dig deeper if they wish,” says Susan Stein, senior curator and vice president of museum programs at Monticello and lead curator on the project. “That’s what we’re all about, bringing Monticello to life and sharing its history and Jefferson with people everywhere.”

Mulberry Row was once a bustling community of activity that included storage sheds, housing for enslaved and free workers, a smokehouse and dairy, a nailery, an iron shop, joinery, and other manufacturing enterprises along a 1,000-foot-long road south of the main house.

Today, little remains—a workman’s house and later a textile workshop, part of the original stable and a few visible foundations along a row of newly planted mulberry trees. Until this spring, visitors had to imagine what the structures looked like and the lives and activities that filled them.

Now, a video of the re-creation plays on a large-screen monitor on the east side of the gift shop, located in a 20th-century building on Mulberry Row. Visitors “can turn away from the monitor to see where the three dwellings were,” Mark says.

The project is part of a larger effort to study, interpret, and understand Mulberry Row more completely, explains Stein. “The digital models are ways for us to visualize and understand the lost buildings,” she says.

Working with a team of experts, Mark relied on documentary and archaeological evidence and Jefferson’s own drawings and notes to piece together his re-creation, which to date includes five of the more than 20 buildings that lined Mulberry Row—three slave dwellings, a smokehouse/dairy, and a storehouse for iron that was sometimes used for nail-making. More are planned for the future.

Mark created plans for the three phases of building: 1770 to 1790, 1791 to 1809, and 1810 to Jefferson’s death in 1826. He drew upon a map drawn by Jefferson to obtain an insurance policy from the Mutual Assurance Society of Virginia to accurately place the buildings. The plan was completed during phase two—the most extensive building period, he says.

Mark places the buildings in context, so viewers understand their location to today’s landscape. Each digitally manipulated building is sited on a photograph of its setting.

The project “has been even more effective and visually dramatic than we expected,” Stein says. “It’s revealing, evocative, and turns out to be a very effective means of helping people visualize the site.”

Mark paid attention to detail at every level. The simple dirt floors of the dwellings, the slightly weathered clapboards, the placement of the tree stumps for the anvils and bellows in the joinery and the tools in the smokehouse are rendered for accuracy.

An expert from Colonial Williamsburg answered questions about the quality of the flame in the fire—How big? Was there smoke? How much do you see?—all contributing to a truthful interpretation, Mark says.

The models also contribute to the discussion about the buildings and their use. “A 3-D model makes evident and reconciles different points of view about what the structure looks like,” Mark says. “It’s not a by-product of research; it’s a way of uncovering gaps in spatial knowledge and reconciling different understandings.”

“The exhibit in Washington and on Mulberry Row are the product of more than 50 years of study,” Stein says.

Mark says he was moved as he observed a descendant of Mulberry Row’s inhabitants watching the re-creation at the exhibit’s opening in January.

“Just capturing the true look of the articles, spaces, houses, and workshops is valuable to a sense of history,” he says. “If it was my ancestors, it would help me have a sense of what the time was like, what skills and knowledge they used, and the everyday world they encountered, and I think that’s important.”

The project is funded with support from the National Endowment for the Humanities and private contributions.

More news from the University of Virginia: www.virginia.edu/uvatoday

Lesbian bars are vanishing but need for them isn’t