BROWN (US) — Two people with paralysis were able to control robotic arms using only their thoughts—and the help of a new interface system.

One participant used the system to serve herself coffee for the first time since becoming paralyzed nearly 15 years ago.

Researchers report that the two people with tetraplegia were able to reach for and grasp objects in three-dimensional space using robotic arms that they controlled directly with brain activity.

The achievement is one of the advances in brain-computer interfaces, restorative neurotechnology, and assistive robot technology described in the May 17 edition of the journal Nature by the BrainGate2 collaboration of researchers at the Department of Veterans Affairs (VA), Brown University, Massachusetts General Hospital, Harvard Medical School, and the German Aerospace Center (DLR).

A 58-year-old woman (“S3”) and a 66-year-old man (“T2”) participated in the study. They had each been paralyzed by a brainstem stroke years earlier, which left them with no functional control of their limbs.

The BrainGate2 pilot clinical trial employs the investigational BrainGate system initially developed at Brown University, in which a baby aspirin-sized device with a grid of 96 tiny electrodes is implanted in the motor cortex—a part of the brain that is involved in voluntary movement. The electrodes are close enough to individual neurons to record the neural activity associated with intended movement.

An external computer translates the pattern of impulses across a population of neurons into commands to operate assistive devices. 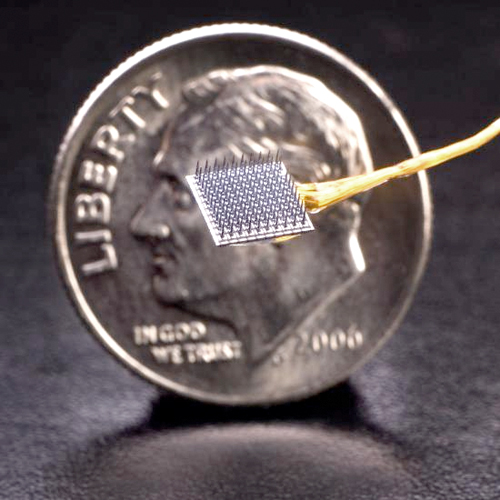 An implanted microelectrode array, first used more than a decade ago, detects brain signals which can be translated by a computer into machine instructions, allowing control of robotic devices by thought. (Credit: Brown University)

BrainGate participants have previously demonstrated neurally based two-dimensional point-and-click control of a cursor on a computer screen and rudimentary control of simple robotic devices.

The study represents the first demonstration and the first peer-reviewed report of people with tetraplegia using brain signals to control a robotic arm in three-dimensional space to complete a task usually performed by their arm.

Specifically, S3 and T2 controlled the arms to reach for and grasp foam targets that were placed in front of them using flexible supports. In addition, S3 used the DLR robot (developed by the DLR Institute of Robotics and Mechatronics) to pick up a bottle of coffee, bring it to her mouth, issue a command to tip it, drink through a straw, and return the bottle to the table. Her BrainGate-enabled, robotic-arm control during the drinking task required a combination of two-dimensional movements across a table top plus a “grasp” command to either grasp and lift or tilt the robotic hand.

“Our goal in this research is to develop technology that will restore independence and mobility for people with paralysis or limb loss,” says lead author Leigh Hochberg, a neuroengineer and critical care neurologist who holds appointments at the Department of Veterans Affairs, Brown University, Massachusetts General Hospital, and Harvard University. He is the sponsor-investigator for the BrainGate2 pilot clinical trial.

“We have much more work to do, but the encouraging progress of this research is demonstrated not only in the reach-and-grasp data, but even more so in S3’s smile when she served herself coffee of her own volition for the first time in almost 15 years.”

Hochberg adds that even after nearly 15 years, a part of the brain essentially “disconnected” from its original target by a brainstem stroke was still able to direct the complex, multidimensional movement of an external arm—in this case, a robotic limb. The researchers also note that S3 was able to perform the tasks more than five years after the electrode array was implanted.

This sets a new benchmark for how long implanted brain-computer interface electrodes have remained viable and provided useful command signals.

John Donoghue, the VA and Brown neuroscientist who pioneered BrainGate more than a decade ago and who is co-senior author of the study, says the paper shows how far the field of brain-computer interfaces has come since the first demonstrations of computer control with BrainGate.

“This paper reports an important advance by rigorously demonstrating in more than one participant that precise three-dimensional neural control of robot arms is not only possible, but also repeatable,” says Donoghue, who directs the Brown Institute for Brain Science.

“We’ve moved significantly closer to returning everyday functions, like serving yourself a sip of coffee, usually performed effortlessly by the arm and hand, for people who are unable to move their own limbs. We are also encouraged to see useful control more than five years after implant of the BrainGate array in one of our participants. This work is a critical step toward realizing the long-term goal of creating a neurotechnology that will restore movement, control, and independence to people with paralysis or limb loss.”

In the research, the robots acted as a substitute for each participant’s paralyzed arm. The robotic arms responded to the participants’ intent to move as they imagined reaching for each foam target. The robot hand grasped the target when the participants imagined a hand squeeze.

Because the diameter of the targets was more than half the width of the robot hand openings, the task required the participants to exert precise control. (Videos of these actions are available on the Nature website.)

T2 performed the session in this study on his fourth day of interacting with the arm; the prior three sessions were focused on system development. Using his eyes to indicate each letter, he later described his control of the arm: “I just imagined moving my own arm and the [DEKA] arm moved where I wanted it to go.”

Patrick van der Smagt, head of bionics and assistive robotics at DLR, director of biomimetic robotics and machine learning labs at DLR and the Technische Universität München, and a co-senior author on the paper says: “This is what we were hoping for with this arm. We wanted to create an arm that could be used intuitively by varying forms of control.

“The arm is already in use by numerous research labs around the world who use its unique interaction and safety capabilities. This is a compelling demonstration of the potential utility of the arm by a person with paralysis.”

Partial funding for this work comes from the VA. The BrainGate system is currently being studied under an Investigational Device Exemption.

AI teaches a robot how to learn to walk

Elephant trunks suck stuff up at 330 miles per hour