UC BERKELEY (US) — Nearly one in four stars like the sun could have Earth-size planets, according to a study of nearby solar-mass stars.

Andrew Howard and Geoffrey Marcy—astronomers at the University of California, Berkeley—chose 166 G and K stars within 80 light years of Earth and observed them with the powerful Keck telescope for five years in order to determine the number, mass and orbital distance of any of the stars’ planets.

The sun is the best known of the G stars, which are yellow, while K-type dwarfs are slightly smaller, orange-red stars.

They found increasing numbers of smaller planets, down to the smallest size detectable today—planets called super-Earths, about three times the mass of Earth. Their results are reported in the Oct. 29 issue of the journal Science.

“Of about 100 typical sun-like stars, one or two have planets the size of Jupiter, roughly six have a planet the size of Neptune, and about 12 have super-Earths between three and 10 Earth masses,” says Howard. “If we extrapolate down to Earth-size planets—between one-half and two times the mass of Earth—we predict that you’d find about 23 for every 100 stars.” 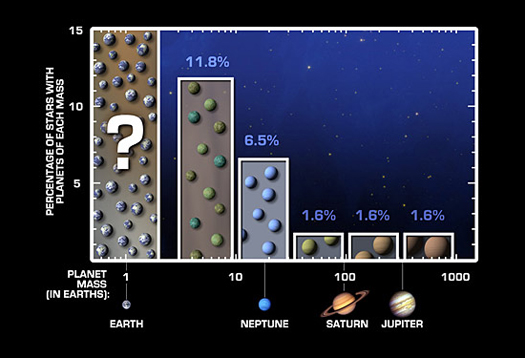 The sizes of planets around 166 nearby, sun-like stars show a clear trend: small planets outnumber larger ones. Each bar on the chart represents the percentage of planets within a specific range of masses. Astronomers extrapolated from these data to estimate that nearly one in four sun-like stars 23 percent host close-in, Earth-size planets. (Credit: NASA/JPL & Caltech/UC Berkeley)

“This is the first estimate based on actual measurements of the fraction of stars that have Earth-size planets,” says Marcy. Previous studies have estimated the proportion of Jupiter and Saturn-size exoplanets, but never down to Neptunes and super-Earths, enabling an extrapolation to Earth-size planets.

“What this means,” Howard adds, “is that, as NASA develops new techniques over the next decade to find truly Earth-size planets, it won’t have to look too far.”

Because the researchers detected only close-in planets, there could be even more Earth-size planets at greater distances, including within the habitable zone located at about the same distance as the earth is from our sun. The habitable, or “Goldilocks,” zone is the distance from a star neither two hot nor too cold to allow the presence of liquid water.

The researchers’ results conflict with current models of planet formation and migration, Marcy notes. After their birth in a protoplanetary disk, planets had been thought to spiral inward because of interactions with the gas in the disk. Such models predict a “planet desert” in the inner region of solar systems.

“Just where we see the most planets, models predict we would find no cacti at all,” says Marcy, who is a member of NASA’s Kepler mission to survey 156,000 faint stars in search of transiting planets. “These results will transform astronomers’ views of how planets form.”

The astronomers used the 10-meter Keck telescopes in Hawaii to measure the minute wobble of each star. Current techniques allow detection of planets massive enough and near enough to their stars to cause a wobble of about 1 meter per second.

That means they saw only massive, Jupiter-like gas giants up to three times the mass of Jupiter (1,000 times Earth’s mass) orbiting as far as one-quarter of an astronomical unit (AU) from the star, or smaller, closer super-Earths and Neptune-like planets (15-30 times the mass of the earth). An AU is 93 million miles, the average distance between the earth and the sun.

Only 22 of the stars had detectable planets—33 planets in all—within this range of masses and orbital distances. After accounting statistically for the fact that some stars were observed more often than others, the researchers estimated that about 1.6 percent of the sun-like stars in their sample had Jupiter-size planets and 12 percent had super-Earths (3-10 Earth masses).

If the trend of increasing numbers of smaller planets continues, they concluded, 23 percent of the stars would have Earth-size planets.

Based on these statistics, the astronomers estimate that the telescope will detect 120-260 “plausibly terrestrial worlds” orbiting some 10,000 nearby G and K dwarf stars with orbital periods less than 50 days.

“One of astronomy’s goals is to find eta-Earth (ηEarth), the fraction of sun-like stars that have an earth,” Howard says. “This is a first estimate, and the real number could be one in eight instead of one in four. But it’s not one in 100, which is glorious news.”

Twelve possible planets also were detected, but they need further confirmation, Marcy says. If these candidate planets are included in the count, the team detected a total of 45 planets around 32 stars.

The research was funded by NASA and the W. M. Keck Observatory, which is operated by the University of California and Caltech.

How do the James Webb Space Telescope’s infrared ‘eyes’ work?