Since launching last December, 40,000 web users from around the world have used real scientific data collected by NASA’s Kepler mission to help professional astronomers analyze the light from 150,000 stars in the hopes of discovering the Earth-like planets orbiting around them.

“This is the first time that the public has used data from a NASA space mission to detect possible planets orbiting other stars,” says Debra Fischer, professor of astronomy at Yale University who helped launch the Planet Hunters project. 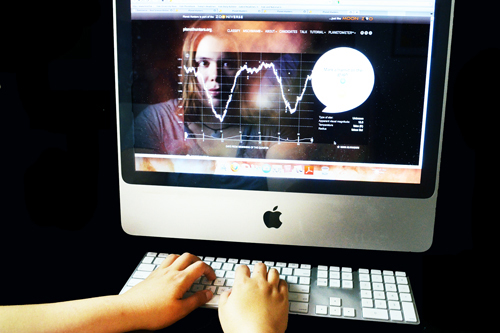 Participants in the Planet Hunters project, who have made about 4 million light curve classifications with data from the Kepler Mission, may have discovered two new exoplanets. (Credit: Michael Marsland)

The research is reported in Monthly Notices of the Royal Astronomical Society.

The candidate planets that orbit their host stars with periods ranging from 10 to 50 days—much shorter than the 365 days it takes the Earth to orbit the Sun—and have radii that range in size from two-and-a-half to eight times Earth’s radius.

Despite those differences, one of the two candidates could be a rocky planet similar to the size of the Earth (as opposed to a giant gas planet like Jupiter), although they aren’t in the so-called “habitable zone” where liquid water, and therefore life as we know it, could exist.

Next, the Planet Hunters team—a collaboration between astronomers at Yale, the University of Oxford, and the Adler Planetarium in Chicago—used the Keck Observatory in Hawaii to analyze the host stars. “I think there’s a 95 percent chance or greater that these are bona fide planets,” Fischer says.

The Kepler team has already announced the discovery of 1,200 exoplanet candidates and will follow up on the highest potential ones with further analysis, but they had discarded the two found by Planet Hunters users for various technical reasons that led them to believe they weren’t promising candidates.

“These three candidates might have gone undetected without Planet Hunters and its citizen scientists,” says Meg Schwamb, a Yale researcher and Planet Hunters co-founder. “Obviously Planet Hunters doesn’t replace the analysis being done by the Kepler team. But it has proven itself to be a valuable tool in the search for other worlds.”

“Scientists on the Kepler team obtained the data, but the public helped finance the project with their tax dollars,” Fischer says. “It’s only right that this data has been pushed back into the public domain, not just as scientifically digested results but in a form where the public can actively participate in the hunt.

“The space program is a national treasure—a monument to America’s curiosity about the universe. It is such an exciting time to be alive and to see these incredible discoveries being made.”

Planet Hunters users are now sifting through the next 90 days of Kepler data in the hopes of adding to the count.

“This is what we found after just a preliminary glance through the first round of Kepler data,” Fischer says. “There’s no doubt that, with each new round of data, there will be more discoveries to come.”

Researchers from California Institute of Technology, the University of California, Berkeley, San Jose State University, and Villanova University also contributed to the study.