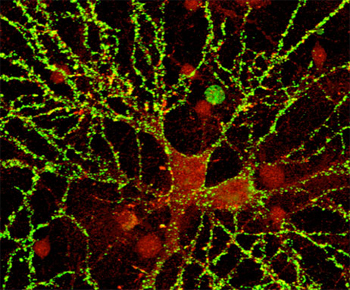 A neuron (red) is bound with neurotoxins, known as ADDLs (green). The bright green signal is the result of oleocanthal treatment, which enhances antibody detection of ADDLs.

The structural change impedes the ability of highly toxic proteins known as ADDLs to damage brain nerve cells. This effect of oleocanthal could be used to advantage in new therapeutics and diagnostics.

“Binding of ADDLs to nerve cell synapses is thought to be a crucial first step in the initiation of Alzheimer’s disease,” says study coleader William Klein, professor of neurobiology and physiology at Northwestern University. “Oleocanthal alters ADDL structure in a way that deters the protein from binding to synapses. Translational studies now are needed to link these laboratory findings to clinical interventions.”

“Our findings may help identify effective preventative measures and lead to improved therapeutics in the fight against Alzheimer’s disease,” adds Paul A.S. Breslin, a sensory psychobiologist at the Monell Center, who coled the research with Klein.

ADDLs bind within the neural synapses of the brains of Alzheimer’s patients and are believed to directly disrupt nerve cell function, eventually leading to memory loss, cell death, and global disruption of brain function. Synapses are specialized junctions that allow one nerve cell to send information to another.

Klein and his colleagues identified ADDLs in 1998, leading to a major shift in thinking about the causes, progression, and treatment of Alzheimer’s disease. Also known as beta-amyloid oligomers, ADDLs are structurally different from the amyloid plaques that accumulate in brains of Alzheimer’s patients.

Reporting on a series of in vitro studies, the researchers found that incubation with oleocanthal changed the structure of ADDLs by increasing the protein’s size.

Knowing that oleocanthal changed ADDL size, the researchers next examined whether oleocanthal affected the ability of ADDLs to bind to synapses of cultured hippocampal neurons. The hippocampus, a part of the brain intimately involved in learning and memory, is one of the first areas affected by Alzheimer’s disease.

Measuring ADDL binding with and without oleocanthal, they discovered that small amounts of oleocanthal effectively reduced short-term binding of ADDLs to hippocampal synapses. Additional studies revealed that oleocanthal can protect synapses from damage caused by ADDLs.

An unexpected finding was that oleocanthal makes ADDLs into stronger targets for antibodies. This action establishes an opportunity for creating more effective immunotherapy treatments, which use antibodies to bind to and attack ADDLs.

Future studies to identify more precisely how oleocanthal changes ADDL composition may increase our understanding of the structural component responsible for ADDL toxicity. Such insights could provide discovery pathways related to disease prevention and treatment.

The National Institute on Aging funded the research, which will be published in the Oct. 15 issue of the journal Toxicology and Applied Pharmacology.