UC SANTA BARBARA / UNC-CHAPEL HILL (US) — Scientists have created the first complete conceptual model for understanding the Deepwater Horizon oil spill and any similar disasters in the future.

On the second anniversary of the Deepwater Horizon oil platform blowout, a national panel of researchers is providing new insight into what happened in the disaster, as well as a guide for how to deal with such events in the future, and why existing tools were inadequate to predict what lay before them. 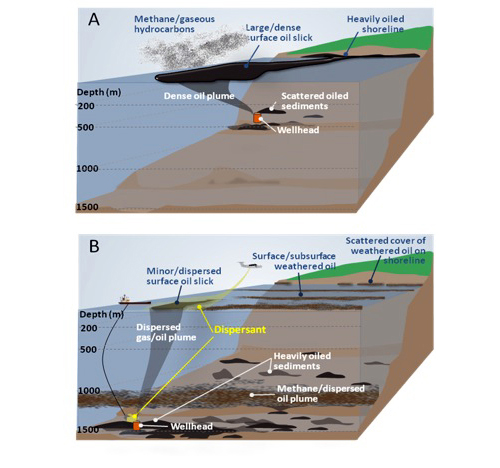 Panel A depicts the traditional model for crude oil fate and effects that prevailed before the DWH blowout, based on synthesis of experience with nearshore maritime spills in shallow water, and panel B shows the newly emerging and still developing model of a deepwater blowout like the DWH. (Credit: UCSB)

The study, produced by the Gulf Oil Spill Ecotox Working Group at University of California, Santa Barbara’s National Center for Ecological Analysis and Synthesis (NCEAS), is published in the May issue of the journal Bioscience.

“The old model assumed that oil would simply float up to the surface and accumulate there and along the coastline,” says co-author Sean Anderson, an associate professor at California State University Channel Islands. “That model works well for pipeline breaks and tanker ruptures, but it is inadequate for this novel type of deep blowout.”

The 2010 Deepwater Horizon oil spill in the Gulf of Mexico was unlike any oil spill science and society had encountered. The blowout occurred at unprecedented depths and released enormous quantities of oil (an estimated 4.9 billion barrels, or 206 million gallons).

Marine and wildlife habitats suffered major damage, and, according to authors, the damage continues to happen today, out of sight. Local and regional economies and livelihoods suffered as well.

According to the researchers—a renowned group of ecotoxicologists, oceanographers, and ecologists who convened under the auspices of NCEAS while the spill was still active—the response to clean up and contain the oil followed a framework that assumed the oil’s behavior would mimic the more familiar shallow-water and surface spills, despite the fact that the dynamics, fate, and effect of deep-water oil on ecosystems are not understood.

“As the Deepwater Horizon spill unfolded, you would hear folks saying things like, ‘We all know what happens when oil and water mix; the oil floats.’ That wasn’t the whole story, and that oversimplification initially sent us down an incorrect path full of assumptions and actions that were not the best possible use of our time and effort,” says Anderson.

After synthesizing existing knowledge to anticipate the potential ecotoxicological effects of the spill, and highlighting major gaps in scientific understanding, the scientists have created the first complete conceptual model for understanding both the Deepwater Horizon spill and analogous disasters in the future.

This new model accounts for how deepwater oil spills unfold and where the resulting ecological impacts accrue. It also emphasizes that the vast majority of the oil is retained at depth—rapidly emulsified and dispersed due to the physics of the pressurized oil jetting from the tip of the wellbore—and, among other response actions, calls into question the efficacy of dispersants.

“We have generally hailed the use of (chemical) dispersants as helpful, but really are basing this on the fact we seemed to have kept oil from getting to the surface,” argues co-autho Gary Cherr, director of University of California, Davis’s Bodega Marine Lab.

“The truth is, much of this oil probably was staying at depth, independent of the amount of surfactants we dumped into the ocean. And we dumped a lot of dispersants into the ocean—all told, approximately one-third of the global supply.”

Co-author Ron Tjeerdema, chair of the Environmental Toxicology Department at UC Davis, concurs. “The problem is, we really must address the downside of such compounds, particularly in light of the fact that the upside probably was not so great as it seemed at the time,” he says.

Armed with a new foundation for research and policy implications, the NCEAS Gulf Oil Spill Ecotox Working Group is calling for further investigation into the long-term effects of deep-water oil spills.

“We now have a sense that the bulk of the impact was probably in the mid-water and deep ocean,” says the study’s lead author, Charles “Pete” Peterson, a professor at University of North Carolina at Chapel Hill, who has been deeply involved in the study of the environmental effects of the Exxon Valdez oil spill for over two decades.

“Who the heck knows what oil does to the mid-water pelagic and deep-dwelling critters? We need an integrated collaboration between deepwater explorers, modelers, ecotoxicologists, microbial ecologists, and so on—all working together in unprecedented ways. We need a whole new type of marine ecology.”

What can we learn from 2010’s Deepwater Horizon oil spill?