COLUMBIA U. (US) — A genetic test that uses microarray analysis conducts a more comprehensive examination of a fetus’s DNA than the current standard method, a study finds.

The clinical trial included 4,400 patients at 29 centers nationwide; the data took four years to compile. The study involved women with advanced maternal age and those whose fetuses were shown in early screening to be at heightened risk for Down syndrome, to have structural abnormalities (as seen with ultrasound), or to have indications of other problems.

This is the first and only study to prospectively compare the current standard method, karyotyping—a visual analysis of the fetus’s chromosomes—with microarray in a blinded head-to-head trial. The findings appear in the New England Journal of Medicine (NEJM). 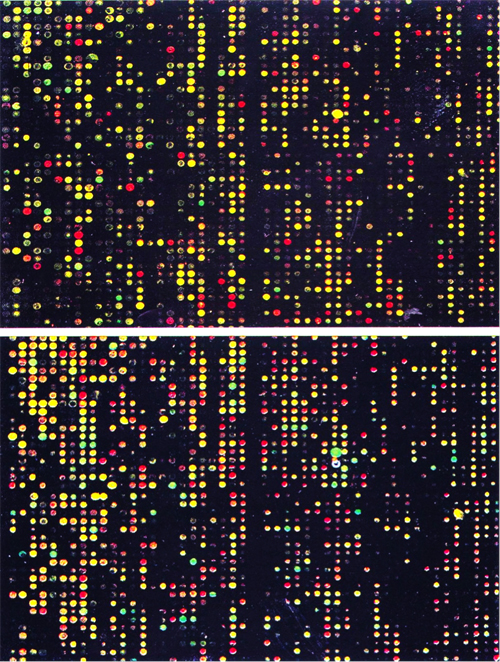 This is a laser scan of the patient DNA to the microarray chip. The intensities of the different color dots indicate the quantity of the DNA. (Credit: Columbia University)

The trial found that microarray analysis, which compares a fetus’s DNA with a normal (control) DNA, performed as well as karyotyping in identifying common aneuploidies (an abnormal number of chromosomes—an extra or missing chromosome causes genetic disorders such as Down syndrome and Edwards syndrome); it also identified additional abnormalities undetected by karyotyping.

Among fetuses in which a growth or structural anomaly had already been detected with ultrasound, microarray found clinically relevant chromosomal deletions or duplications in one out of 17 cases (6 percent) that were not observed with karyotyping. In cases sampled for advanced maternal age or positive screening results, microarray analysis picked up an abnormality in one out of every 60 pregnancies (1.7 percent) that had a normal karyotype.

“Based on our findings, we believe that microarray will and should replace karyotyping as the standard for evaluating chromosomal abnormalities in fetuses,” says Ronald J. Wapner, the study’s principal investigator and professor and vice chairman for research at the Department of Obstetrics and Gynecology at Columbia University Medical Center (CUMC). “These chromosomal micro-deletions and duplications found with microarray are often associated with significant clinical problems.”

Parents deciding whether to take these tests must weigh a number of factors, including their individual risk of fetal abnormalities, possible procedure-induced miscarriage, and the consequences of having an affected child.

Work is under way to develop a non-invasive test, the same information seen by microarray, using a blood sample taken from the mother but is not yet available.

“We hope that in the future—when microarray can be done non-invasively—every woman who wishes will be offered microarray, so that she can have as complete information as possible about her pregnancy,” says Wapner, who also is director of reproductive genetics at NewYork-Presbyterian/Columbia.

In a second paper published in the same issue of NEJM, about the use of microarray in stillbirth, results showed that microarray produced a clinical relevant result in 87 percent of 532 cases, which were analyzed with both karyotyping and microarray. In contrast, standard methods for analyzing a stillbirth, which include karyotyping, have been shown in previous research to fail to return information in 25 to 60 percent of cases.

“Microarray was significantly more successful at returning clinically relevant information because, unlike karyotyping, it does not require cultured cells. Viability does not come into play at all—DNA can be extracted from tissue that is no longer living,” says Brynn Levy, the study’s senior author and associate professor of pathology and cell biology, and director of the Clinical Cytogenetics Laboratory at NewYork-Presbyterian/Columbia.

“Not being able to explain why a stillbirth occurred can be very hard for families,” adds Levy. “These findings are important because they give us a significantly more reliable method to provide information to families and their physicians.”

“The primary benefit of using microarray analysis rather than karyotype analysis is the greater likelihood of obtaining results,” says Uma Reddy of the Eunice Kennedy Shriver National Institute of Child Health and Human Development of the National Institutes of Health, and first author of the paper. “Microarray analysis is especially useful in stillbirth cases in which the karyotype has failed or there is a birth defect present.

“However, microarray analysis is currently more expensive than karyotyping—and this may be a barrier to some.”

Both microarray and karyotyping reveal clinically relevant information about conditions that can be life-threatening for a newborn baby or that can signal a possible health threat that might be treatable. However, as with all current genetic testing, including karyotyping, the results may reveal findings that have not been described in the literature or in which the exact implications are known.

“While the vast majority of abnormalities found with microarray are associated with known conditions, not all are. But with time, knowledge and understanding of what these abnormalities mean will continue to grow,” says Wapner. “When we started this study five years ago, the incidence of findings we did not understand was about 2.5 percent—now, with more information, that has fallen to 1.5 percent.”

Will rapid COVID tests be able to detect new variants?