JOHNS HOPKINS (US) — The first ankle and toe fossils from the earliest North American primate suggest our first forerunners on the continent may have lived or moved primarily in trees, like modern lemurs.

Previous excavations have yielded pieces of the jaw and teeth of Teilhardina, primates that first appeared just after the beginning of the Eocene Epoch about 55.5 million years ago.

A Johns Hopkins University team says it identified the new ankle and toe fossils of the same species in the badlands of the Bighorn Basin in Wyoming, an area rich in fossils. The primate fossils were discovered in strata—bands of stratified earth—dating to the beginning of the Eocene Epoch. 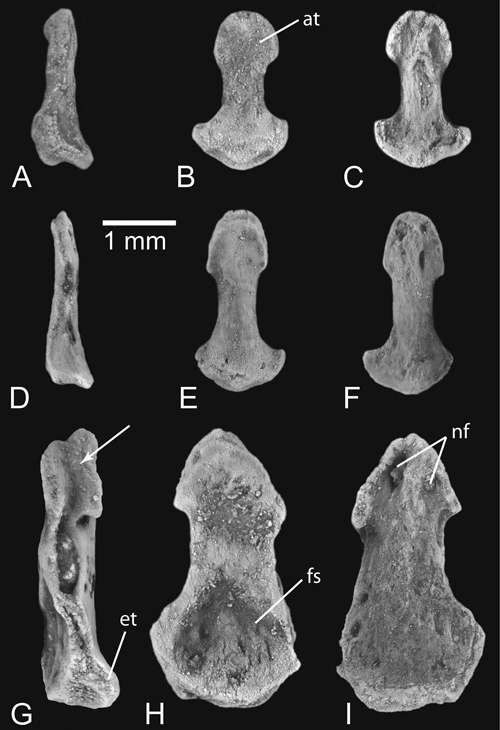 An image of finger and toe tip bones from Teilhardina, a small primate that lived in North America as long ago as the Eocene Epoch, about 55.5 million years ago. The flat arrow-shaped nail beds indicate that they had flat nails, rather than claws. (Credit: The Rose Laboratory, JHU)

“Living primates have nails on all or most of their toes and fingers, and they don’t occur in any other animal in exactly the same way,” says Ken Rose, professor of anatomy. “The fossil toes we found have morphology (shape and form) indicating the presence of nails rather than claws, making our discovery the oldest evidence of nails found in primitive primates so far.”

In a report published recently in the American Journal of Physical Anthropology, the researchers said they noticed the ankle bone fossils were elongated, a characteristic of present-day non-monkey or ape primates that do a lot of jumping.

The neck of the talus—one of the ankle bones—is relatively longer in Teilhardina than it is in present day lemurs, which move about by leaping from tree to tree, says Rose. Another ankle bone, the navicular, is also elongated.

Prior excavations in the same region revealed fossils of early relatives of horses, carnivores, and rodents, as well as Teilhardina. The researchers screened through hundreds of pounds of sedimentary rock, reducing it to fine-grained concentrate, which was transported back to the lab for examination under the microscope.

Some early primate teeth specimens are known to be so small they appear as specks to the human eye. Under the microscope, the researchers discovered not only teeth and jawbones from Teilhardina as before, but also three fossilized toe bones and three ankle bones, which Rose says are the first found in North America.

The bones were relatively free of attached sediment and appeared smooth and dark—due to the type of minerals accumulated during fossilization—against the gray, fine-grained sediment. Although toe bones are quite variable among species, Rose says, these particular primate specimens are highly distinctive to a trained anatomist.

Close examination of the tips of the toe bones revealed a widened, expanded arrow-shaped region characteristic of flat finger or toe nails, rather than claws. One of the toe bones was larger than the other two proportionally, and the research team proposed that this one was from the big toe or thumb.

Ancestors of Teilhardina originally had claws—hooked, narrow nail beds still found on many land animals like cats or birds. One of the distinguishing factors of primates was that they evolved finger and toe nails, with wide nail beds, like those found in humans and apes.

Analysis of the navicular ankle bone involved a calculation known as the navicular index that takes into account the proportion of the length to the width of the bone. Teilhardina has a relatively elongated navicular bone with an index of 165 units, similar to those of lemurs.

But the Teilhardina navicular bone is significantly shorter than those found in bush babies (between 300 to 500 units) and tarsiers (between 400 to 600 units). Modern lemurs are known leapers, while bush babies and tarsiers are exceptional leapers, jumping up to 6.5 feet.

The numbers suggest that Teilhardina moved actively through the trees and was capable of some leaping, Rose says.

That Teilhardina was most likely a tree-dweller too, Rose says, reflects the fact that its habitat then was incredibly different than the badlands of Wyoming today, which are dry and rocky with little vegetation. These creatures lived during a period of global warming, when subtropical climates and vegetation stretched all the way north to the Arctic Circle, Rose explains.

Rose says Teilhardina was most likely similar in appearance to modern-day bush babies, which are small primates with big eyes, strong back legs and long tails. But he estimates that the Teilhardina were smaller, only weighing about 3 or 4 ounces, about the size of the smallest living primates, mouse lemurs.

“Research on early primates gives us more evidence of our origins and our place in nature, with this particular study highlighting the oldest known member of our group from North America,” Rose says.

The study was funded by grants from the National Science Foundation and the Yale University Department of Anthropology Williams Fund. Additional authors are from the University of Missouri, the Florida Museum of Natural History, Yale University, and Brooklyn College.

Oldest bone weapon in Americas is stuck in a mastodon rib