PENN STATE (US) — Twenty-four new and threatened species of lizards known as skinks, all from islands in the Caribbean, have been discovered.

According to Blair Hedges, professor of biology at Penn State University and the leader of the research team, half of the newly added skink species already may be extinct or close to extinction, and all of the others on the Caribbean islands are threatened with extinction. 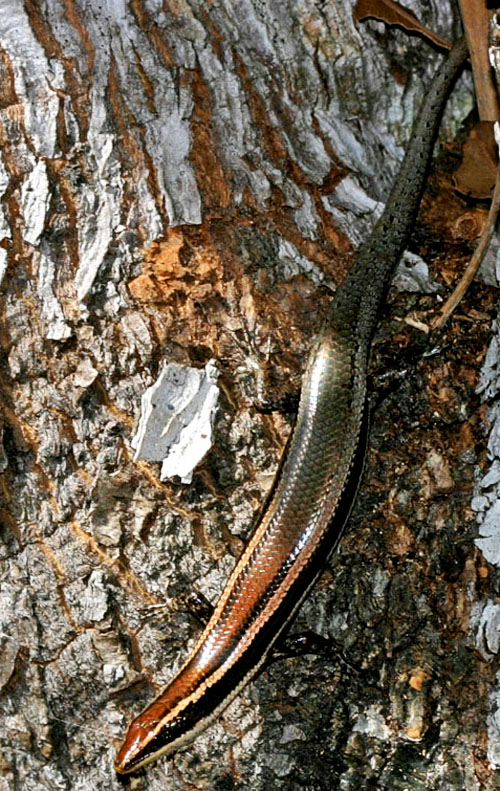 “According to our research, all of the skink species found only on Caribbean islands are threatened,” says study leader Blair Hedges. “That is, they should be classified in the Red List as either vulnerable, endangered, or critically endangered.” (Credit: “Jamaican Skink” by Joseph Burgess/Penn State)

The researchers found that the loss of many skink species can be attributed primarily to predation by the mongoose—an invasive predatory mammal that was introduced by farmers to control rats in sugarcane fields during the late 19th century.

The research team reports on the newly discovered skinks in a 245-page article published April 30 in the journal Zootaxa.

About 130 species of reptiles from all over the world are added to the global species count each year in dozens of scientific articles. However, not since the 1800s have more than 20 reptile species been added at one time.

Primarily through examination of museum specimens, the team identified a total of 39 species of skinks from the Caribbean islands, including six species currently recognized, and another nine named long ago but considered invalid until now.

Hedges and his team also used DNA sequences, but most of the taxonomic information, such as counts and shapes of scales, came from examination of the animals themselves.

“Now, one of the smallest groups of lizards in this region of the world has become one of the largest groups,” Hedges says. “We were completely surprised to find what amounts to a new fauna, with co-occurring species and different ecological types.” He said some of the new species are six times larger in body size than other species in the new fauna.

Hedges also explained that these New World skinks, which arrived in the Americas about 18 million years ago from Africa by floating on mats of vegetation, are unique among lizards in that they produce a placenta, as do humans. It is an organ that directly connects the growing offspring to the maternal tissues that provide nutrients.

“While there are other lizards that give live birth, only a fraction of the lizards known as skinks make a placenta and gestate offspring for up to one year,” Hedges says.

He also speculated that the lengthy gestational period might have given predators a competitive edge over skinks, since pregnant females are slower and more vulnerable.

“The mongoose is the predator we believe is responsible for many of the species’ close-to-extinction status in the Caribbean,” Hedges says. “Our data show that the mongoose, which was introduced from India in 1872 and spread around the islands over the next three decades, has nearly exterminated this entire reptile fauna, which had gone largely unnoticed by scientists and conservationists until now.”

According to Hedges, the “smoking gun” is a graph included in the scientific paper showing a sharp decline in skink populations that occurred soon after the introduction of the mongoose. Hedges explained that the mongoose originally was brought to the New World to control rats, which had become pests in the sugarcane fields in Cuba, Hispaniola, Puerto Rico, Jamaica, and the Lesser Antilles.

While this strategy did help to control infestations of some pests, for example, the Norway rat, it also had the unintended consequence of reducing almost all skink populations.

“By 1900, less than 50 percent of those mongoose islands still had their skinks, and the loss has continued to this day,” Hedges says.

This newly discovered skink fauna will increase dramatically the number of reptiles categorized as “critically endangered” by the International Union for Conservation of Nature in their “Red List of Threatened Species,” which is recognized as the most comprehensive database evaluating the endangerment status of various plant and animal species.

“According to our research, all of the skink species found only on Caribbean islands are threatened,” Hedges says. “That is, they should be classified in the Red List as either vulnerable, endangered, or critically endangered.

Hedges explains that there are two reasons why such a large number of species went unnoticed for so many years, in a region frequented by scientists and tourists.

“First, Caribbean skinks already had nearly disappeared by the start of the 20th century, so people since that time rarely have encountered them and therefore have been less likely to study them,” he says. “Second, the key characteristics that distinguish this great diversity of species have been overlooked until now.”

Hedges also notes that many potential new species of animals around the world have been identified in recent years with DNA data. However, much more difficult is the task of following up DNA research with the work required to name new species and to formally recognize them as valid, as this team did with Caribbean skinks.

The other member of the research team, Caitlin Conn, now a researcher at the University of Georgia and formerly a biology major at Penn State, adds that researchers might be able to use the new data to plan conservation efforts, to study the geographic overlap of similar species, and to study in more detail the skinks’ adaptation to different ecological habitats or niches.

The research team also stresses that, while the mongoose introduction by humans now has been linked to these reptile declines and extinctions, other types of human activity, especially the removal of forests, are to blame for the loss of other species in the Caribbean.

Funding for the research comes from the National Science Foundation.