RICE U. (US) — Cables made of carbon nanotubes could be just as efficient as traditional metals but at a sixth of the weight, a potential windfall for airplanes and cars.

Enrique Barrera, professor of mechanical engineering and materials science at Rice University made such a cable from double-walled carbon nanotubes and powered a fluorescent light bulb at standard line voltage—a true test of the novel material’s ability to stake a claim in energy systems of the future.

The research, reported in the journal Scientific Reports, details cables spun from pristine nanotubes that can be tied together without losing their conductivity. 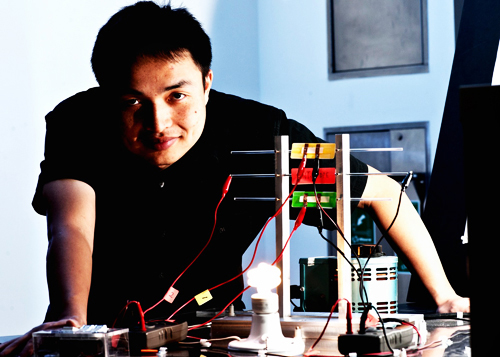 Yao Zhao shows a demonstration rig in which he uses a short piece of carbon nanotube cable to provide standard line voltage to a fluorescent light bulb. (Credit: Jeff Fitlow)

Yao Zhao, who recently defended his dissertation toward his doctorate at Rice, is the paper’s lead author. He built the demo rig that let him toggle power through the nanocable and replace conventional copper wire in the light-bulb circuit.

Zhao left the bulb burning for days on end, with no sign of degradation in the nanotube cable. He says he is reasonably sure the cable is mechanically robust; tests showed the nanocable to be just as strong and tough as metals it would replace, and it worked in a wide range of temperatures.

Zhao also found that tying two pieces of the cable together did not hinder their ability to conduct electricity.

The few centimeters of cable demonstrated in the present study seems short, but spinning billions of nanotubes supplied by research partner Tsinghua University into a cable at all is quite a feat, Barrera says.

The chemical processes used to grow and then align nanotubes will ultimately be part of a larger process that begins with raw materials and ends with a steady stream of nanocable.

The next stage will be to make longer, thicker cables that carry higher current while keeping the wire lightweight, Barrera says. “We really want to go better than what copper or other metals can offer overall.”

The Research Partnership to Secure Energy for America, the Department of Energy, and the Air Force Research Laboratory supported the project.