A sample of the graphene/nanotube hybrid grown on a flexible nickel substrate. The hybrid material is being tested as an efficient cathode for dye-sensitized solar cells. (Credit: Jeff Fitlow/Rice) 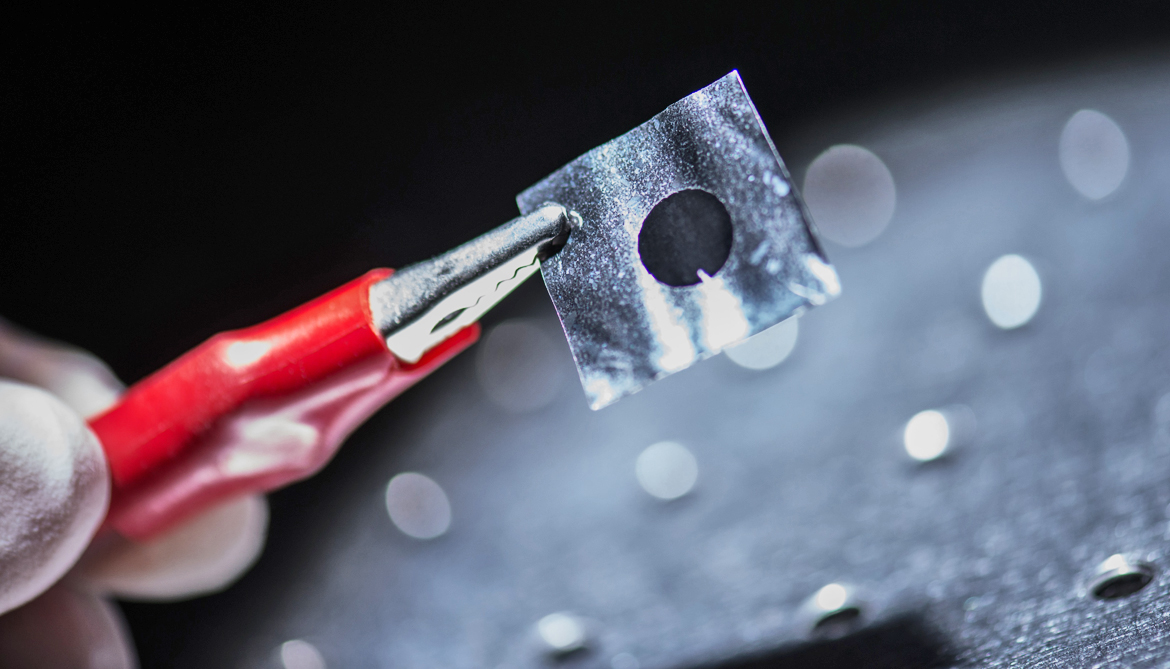 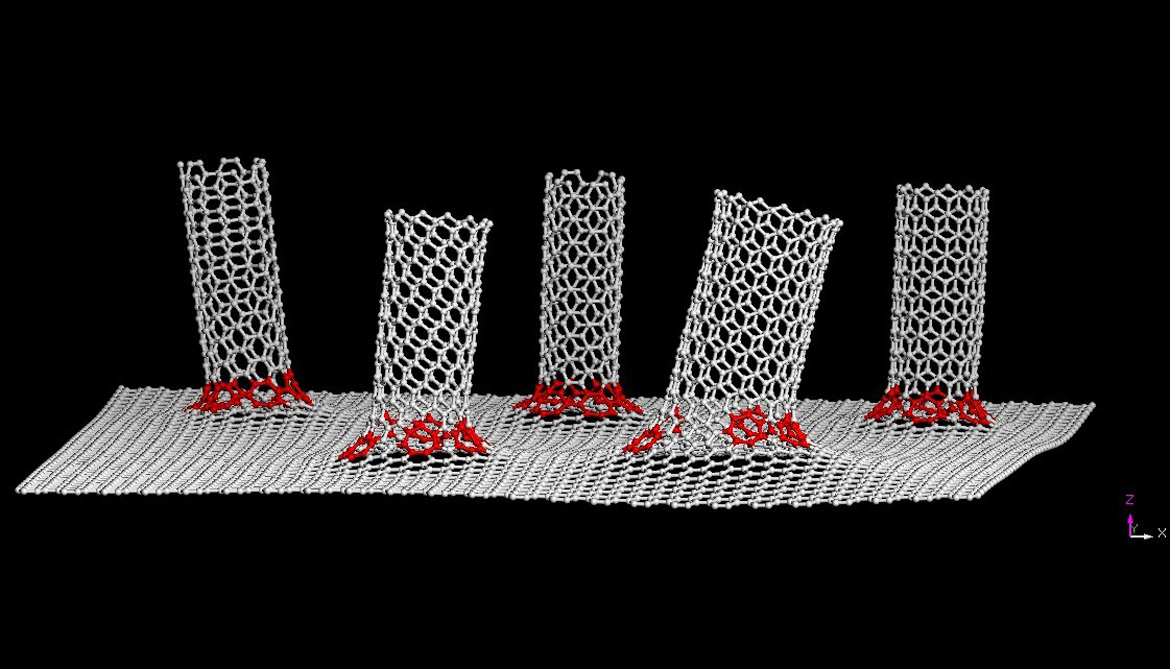 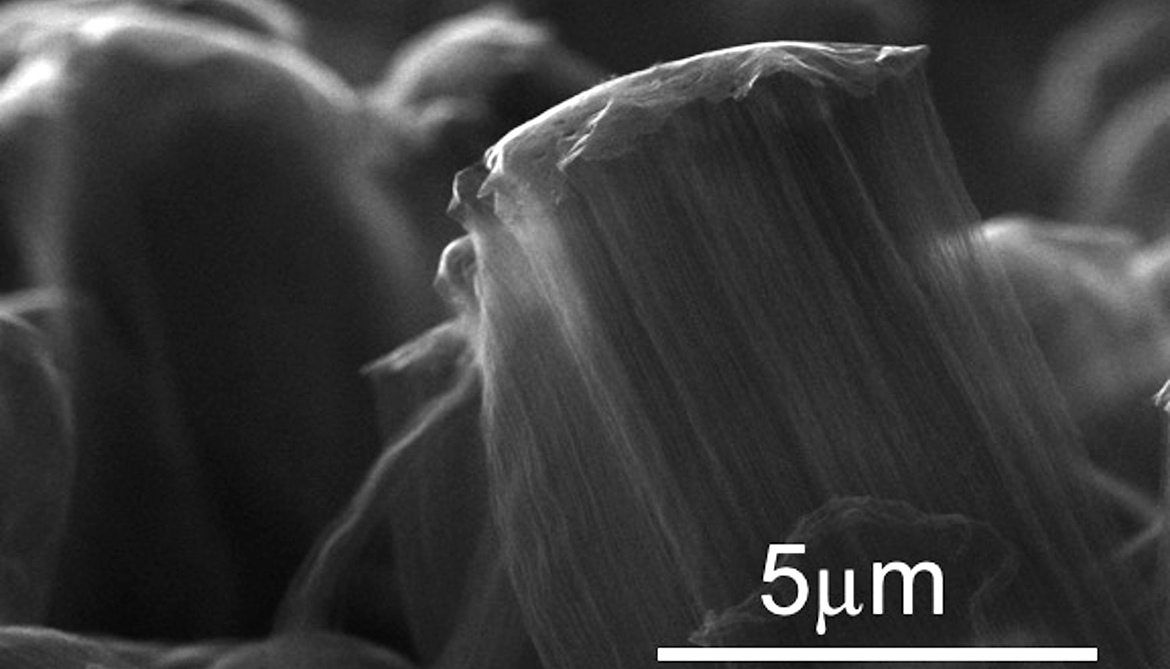 The Rice University lab of materials scientist Jun Lou created the new cathode, one of the two electrodes in batteries, from nanotubes that are seamlessly bonded to graphene. This construction would replace the expensive and brittle platinum-based materials often used in earlier versions.

Dye-sensitized solar cells have been in development since 1988 and have been the subject of countless high school chemistry class experiments.

They use cheap organic dyes, drawn from materials such as raspberries, which cover conductive titanium dioxide particles. The dyes absorb photons and produce electrons that flow out of the cell for use—a return line completes the circuit to the cathode that combines with an iodine-based electrolyte to refresh the dye.

While they are not nearly as efficient as silicon-based solar cells in collecting sunlight and transforming it into electricity, dye-sensitized solar cells have advantages for many applications, according to co-lead author Pei Dong, a postdoctoral researcher in Lou’s lab.

“The first is that they’re low-cost, because they can be fabricated in a normal area,” Dong says. “There’s no need for a clean room. They’re semi-transparent, so they can be applied to glass, and they can be used in dim light; they will even work on a cloudy day.

“Or indoors,” Lou adds. “One company commercializing dye-sensitized cells is embedding them in computer keyboards and mice so you never have to install batteries. Normal room light is sufficient to keep them alive.”

The breakthrough extends a stream of nanotechnology research at Rice that began with chemist Robert Hauge’s 2009 invention of a “flying carpet” technique to grow very long bundles of aligned carbon nanotubes. In his process, the nanotubes remained attached to the surface substrate but pushed the catalyst up as they grew.

The graphene/nanotube hybrid came along two years ago. Dubbed “James’ bond” in honor of its inventor, Rice chemist James Tour, the hybrid features a seamless transition from graphene to nanotube.

The graphene base is grown via chemical vapor deposition and a catalyst is arranged in a pattern on top. When heated again, carbon atoms in an aerosol feedstock attach themselves to the graphene at the catalyst, which lifts off and allows the new nanotubes to grow. When the nanotubes stop growing, the remaining catalyst (the “carpet”) acts as a cap and keeps the nanotubes from tangling.

First, the graphene and nanotubes are grown directly onto the nickel substrate that serves as an electrode, eliminating adhesion issues that plagued the transfer of platinum catalysts to common electrodes like transparent conducting oxide.

Second, the hybrid also has less contact resistance with the electrolyte, allowing electrons to flow more freely. The new cathode’s charge-transfer resistance, which determines how well electrons cross from the electrode to the electrolyte, was found to be 20 times smaller than for platinum-based cathodes, Lou says.

The key appears to be the hybrid’s huge surface area, estimated at more than 2,000 square meters per gram. With no interruption in the atomic bonds between nanotubes and graphene, the material’s entire area, inside and out, becomes one large surface. This gives the electrolyte plenty of opportunity to make contact and provides a highly conductive path for electrons.

Lou’s lab built and tested solar cells with nanotube forests of varying lengths. The shortest, which measured between 20-25 microns, were grown in 4 minutes. Other nanotube samples were grown for an hour and measured about 100-150 microns.

When combined with an iodide salt-based electrolyte and an anode of flexible indium tin oxide, titanium dioxide, and light-capturing organic dye particles, the largest cells were only 350 microns thick—the equivalent of about two sheets of paper—and could be flexed easily and repeatedly.

Tests found that solar cells made from the longest nanotubes produced the best results and topped out at nearly 18 milliamps of current per square centimeter, compared with nearly 14 milliamps for platinum-based control cells. The new dye-sensitized solar cells were as much as 20 percent better at converting sunlight into power, with an efficiency of up to 8.2 percent, compared with 6.8 for the platinum-based cells.

Based on recent work on flexible, graphene-based anode materials by the Lou and Tour labs and synthesized high-performance dyes by other researchers, Lou expects dye-sensitized cells to find many uses. “We’re demonstrating all these carbon nanostructures can be used in real applications,” he says.

The discovery appears online in the Journal of Materials Chemistry A.

Yu Zhu, a Rice alumnus and now an assistant professor at the University of Akron, Ohio, is co-lead author of the paper. Coauthors include researchers at Rice and Tsinghua University in China.

The Welch Foundation, the Air Force Office of Scientific Research, and its Multidisciplinary University Research Initiative (MURI), the Department of Energy, the Lockheed Martin LANCER IV program, Sandia National Laboratory, and the Office of Naval Research MURI supported the work.

A little heat can fix cracks in perovskite films