RICE U. (US) — A new solid-state, nanotube-based supercapacitor promises to combine the best qualities of high-energy batteries and fast-charging capacitors in a device suitable for extreme environments.

Potential uses span on-chip nanocircuitry to entire power plants, according to the study scheduled for publication in the journal Carbon. 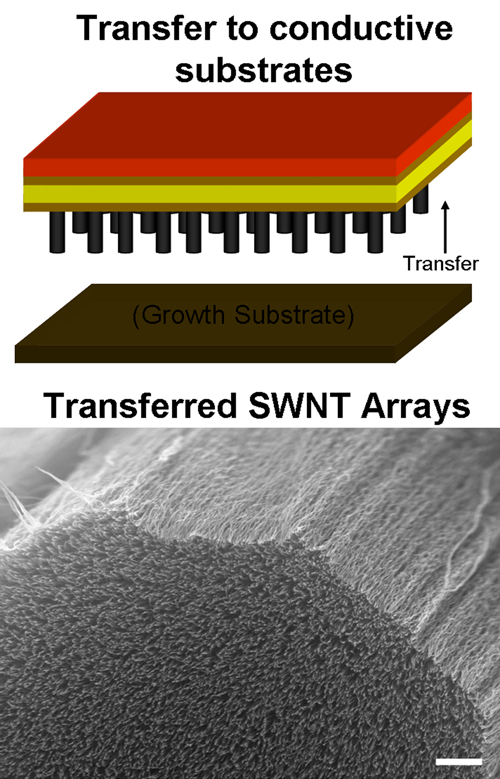 But traditional EDLCs rely on liquid or gel-like electrolytes that can break down in very hot or cold conditions. In the new supercapacitor, a solid, nanoscale coat of oxide dielectric material replaces electrolytes entirely.

The researchers also took advantage of scale. The key to high capacitance is giving electrons more surface area to inhabit, and nothing on Earth has more potential for packing a lot of surface area into a small space than carbon nanotubes .

When grown, nanotubes self-assemble into dense, aligned structures that resemble microscopic shag carpets. Even after they’re turned into self-contained supercapacitors, each bundle of nanotubes is 500 times longer than it is wide. A tiny chip may contain hundreds of thousands of bundles.

For the new device, a team at Rice University grew an array of 15-20 nanometer bundles of single-walled carbon nanotubes up to 50 microns long. Robert Hauge, a distinguished faculty fellow in chemistry, led the effort with former Rice graduate students Cary Pint, first author of the paper and now a researcher at Intel, and Nolan Nicholas, now a researcher at Matric.

The array was then transferred to a copper electrode with thin layers of gold and titanium to aid adhesion and electrical stability. The nanotube bundles (the primary electrodes) were doped with sulfuric acid to enhance their conductive properties; then they were covered with thin coats of aluminum oxide (the dielectric layer) and aluminum-doped zinc oxide (the counterelectrode) through a process called atomic layer deposition (ALD). A top electrode of silver paint completed the circuit.

“Essentially, you get this metal/insulator/metal structure,” says Pint. “No one’s ever done this with such a high-aspect-ratio material and utilizing a process like ALD.”

Hauge says the new supercapacitor is stable and scaleable. “All solid-state solutions to energy storage will be intimately integrated into many future devices, including flexible displays, bio-implants, many types of sensors, and all electronic applications that benefit from fast charge and discharge rates,” he adds.

The supercapacitor holds a charge under high-frequency cycling and can be naturally integrated into materials, says Pint. He envisioned an electric car body that is a battery, or a microrobot with an onboard, nontoxic power supply that can be injected for therapeutic purposes into a patient’s bloodstream.

Pint says it would be ideal for use under the kind of extreme conditions experienced by desert-based solar cells or in satellites, where weight is also a critical factor. “The challenge for the future of energy systems is to integrate things more efficiently. This solid-state architecture is at the cutting edge,” he adds.

Researchers at Harvard University contributed to the work, which was supported by T.J. Wainerdi and Quantum Wired, in coordination with the Houston Area Research Council; the Office of Naval Research MURI program; the Wright Patterson Air Force Laboratory, and the National Science Foundation.

Fertilizer could be made much more sustainably