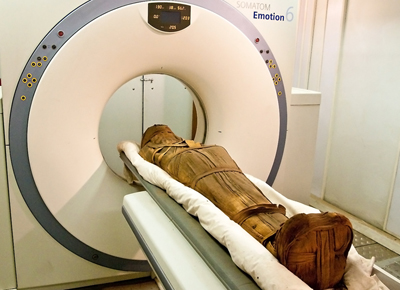 The mummy of Esankh (above), an Egyptian man who lived between 1070 B.C. and 712 B.C., undergoes CT scanning. Researchers have discovered signs of atherosclerosis in ancient mummies, suggesting that the condition causing heart attacks and strokes isn’t just a modern malady. (Credit: Michael Miyamoto /UC San Diego)

UC IRVINE (US)—Hardening of the arteries has been detected in both male and female Egyptian mummies as old as 3,500 years, suggesting that factors causing heart attacks and strokes are not solely byproducts of modern times.

“Atherosclerosis is widespread among modern-day humans and—despite differences in ancient and modern lifestyles—we found that it was rather common in ancient Egyptians of high socioeconomic status living more than three millennia ago,” says UC Irvine associate clinical professor of cardiology Gregory Thomas, who was part of an international team that conducted the study.

The nameplate of the pharaoh Merenptah (who ruled from 1213-1203 B.C.) at Cairo’s Museum of Egyptian Antiquities says that when he died at about age 60, he had atherosclerosis, arthritis, and dental decay. Intrigued that atherosclerosis existed among ancient Egyptians, Thomas, along with U.S. and Egyptian cardiologists, joined by experts in Egyptology and preservation, selected 20 mummies at the museum to study.

In February, the mummies underwent whole-body CT scanning with special attention to the cardiovascular system. Researchers found that nine of the 16 mummies with identifiable arteries or hearts had calcification. Some had hardening in as many as six arteries.

Using skeletal analysis, the Egyptologists and preservationists were able to determine the approximate age at death for all the mummies and the names and occupations of the majority. Of the eight who had died when they were older than 45, seven had calcification, while only two of the eight who had died an earlier age had hardening of the arteries.

Atherosclerosis did not spare women either.

The most ancient mummy found to have been afflicted by atherosclerosis was that of Lady Rai, who died around 1530 B.C. and had been the nursemaid to Queen Ahmose-Nefertari. She lived about 300 years prior to the time of Moses and 200 years before King Tutankhamun.

All the mummies whose identities could be discerned were of high socioeconomic status, generally serving in the Pharaoh’s court or as priests or priestesses. The diets of individual mummies could not be determined, but it was common at the time—especially among the upper classes—to eat meat in the form of cattle, ducks, and geese.

“While we do not know whether atherosclerosis caused the demise of any of the mummies in the study, we can confirm that the disease was present in many,” Thomas says. “Our findings suggest that we may have to look beyond modern risk factors to fully understand the disease.”

Study results appear in the Journal of the American Medical Association and were presented Nov. 17 at the American Heart Association’s Scientific Sessions in Orlando, Fla.

Many older adults use meds to block arthritis pain