The mummy of Henut-Wedjebu was one of three to go through the CT scanner. (Credit: Joe Angeles/Washington University) 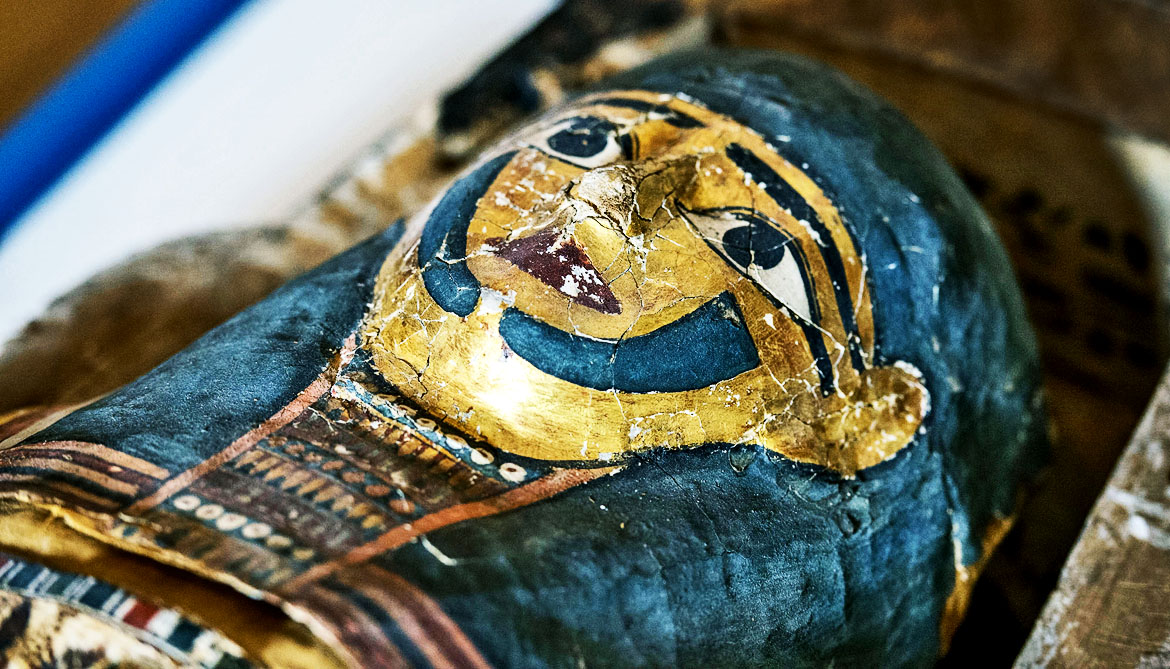 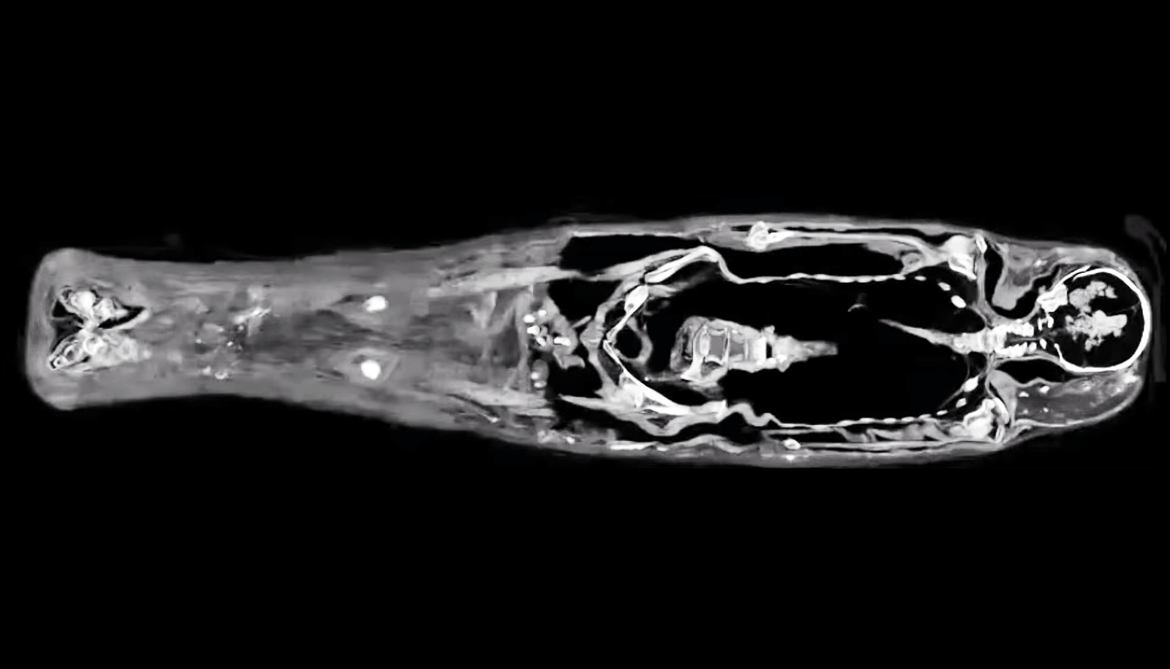 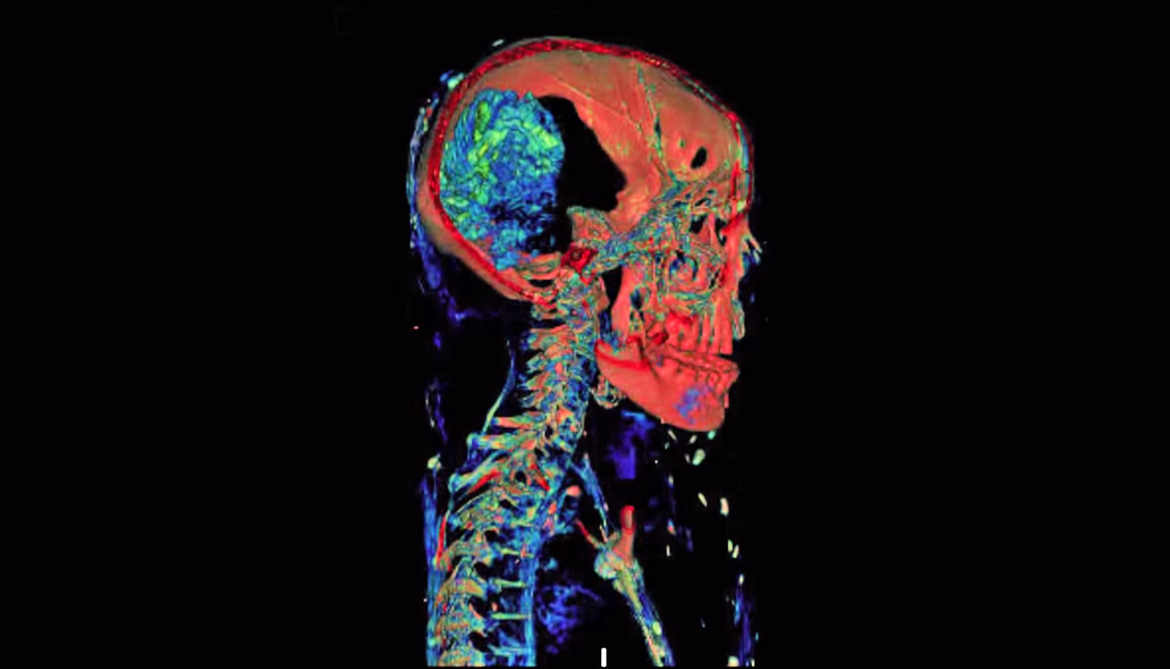 One of the mummies already was known to have a brain, but scans revealed she also still has lungs. In many mummies, lungs typically were removed prior to burial.

The scientists—radiologists with the Washington University Mallinckrodt Institute of Radiology—discovered that the same mummy also has an array of small objects around her head. It appears to be a headdress or embellished shroud, but other possibilities include packing material or debris.

The scientists were surprised to find that a second mummy appeared to be significantly shorter than his sarcophagus. Further scanning revealed that his head had been dislodged from his body, perhaps when grave robbers ransacked his tomb.

They also found an item on his chest that may have been a burial amulet missed by grave robbers. They hope to use the scanning data to reconstruct the item with a 3D printer.

The mummies’ burial containers and wrappings identify each by name. The Saint Louis Art Museum’s mummy is Amen-Nestawy-Nakht, a male; the Kemper Art Museum mummies are Pet-Menekh, also a male, and Henut-Wedjebu, a female.

Karen K. Butler, associate curator of the Kemper Art Museum, says Pet-Menekh and Henut-Wedjebu were donated to the university in 1896 by Charles Parsons, a St. Louis banker and prominent art collector. Working with a curator from the Egyptian Museum in Cairo, Parsons acquired them shortly after excavation through the Antiquities Service of Egypt.

Two priests and a lady

Henut-Wedjebu, the oldest of the mummies, was discovered in a cave-like tomb near the ruins of the Egyptian city of Thebes. Her name means “singer of Amun and lady of the house,” and her elaborately gilded coffin, decorated with texts from the Book of the Dead, is one of only eight such objects to survive from the reign of Amenhotep III (1390-1353 BCE).

Pet-Menekh—or “he whom the excellent one has given”—is thought to have been a priest of the god Chem during the Ptolemaic period (c. 300 BCE). He died in his 30s or 40s, possibly of sudden trauma or acute disease. His coffin—likely found at the Necropolis of El-Hawawish in Akhmim—is richly decorated with hundreds of hieroglyphics as well as images of the goddesses Isis and Nut.

Amen-Nakht—or “Amun (Lord) of the Thrones of the Two Lands is Strong”—acquired by the Saint Louis Art Museum in 1980, was a priest of Amun during the 22nd Dynasty (945–712 BCE). His coffin is thought to have been discovered in the Necropolis of Thebes. A painted cartonnage—a kind of funerary case made of linen and plaster—covers the body and illustrates the panoply of deities charged with escorting him into the afterlife.

“The technical sophistication of all three mummies suggests that these were well-off individuals,” says Lisa Çakmak, assistant curator for ancient art at the Saint Louis Art Museum, who initiated the project.

“We would expect to see that reflected in the condition of their teeth and skeletons. The CT scan helps us to better understand their lifestyles.”

Mummies present art experts and scientists with a formidable challenge: They are incredible time capsules from human societies that vanished thousands of years ago, but opening the capsules would desecrate human remains and possibly destroy unique cultural treasures.

Modern medical imaging techniques offer ways to peer into these time capsules without physically opening them. Scientists scanned Amen-Nestaway-Nakht two decades ago, but imaging technology has advanced significantly since then.

Çakmak, Butler, and others approached Gil Jost, then director of the Mallinckrodt Institute, about the possibility of getting the mummies scanned. Jost enlisted Sanjeev Bhalla, professor of radiology and chief of cardiothoracic imaging, to lead the research team.

How to scan mummies

The scientists considered scanning the mummies with a magnetic resonance imaging (MRI) unit, but it was impossible to guarantee that the mummies were free of any metals. Metal is prohibited in MRIs because the strong magnets in the scanners can damage the equipment and the subject being scanned.

More importantly, though, mummies are free of water as a result of the mummification process, and the images created with MRI scanning are dependent on the water content of tissue.

The researchers instead brought the mummies to a powerful and recently installed computerized tomography (CT) scanner. The unit uses X-rays to virtually slice a solid object, producing detailed 3D images of its interior.

“This new CT scanner has higher spatial resolution and quickly can assemble slices in a variety of ways, providing more medical details about the mummies,” Bhalla says.

In living patients, Bhalla and his colleagues often inject contrast agents that help make different types of cells and tissues stand out. This was not an option for the mummies, but researchers scanned them at two different energy levels to enhance details.

Among other goals, the researchers are analyzing the data for signs of artery hardening in the mummies. Indicators of heart disease have been detected in prior mummy scans, but it’s not clear yet if this is reflective of the elite lifestyle of anyone rich enough to be mummified or if heart disease was a common problem in ancient Egyptian society.

The researchers also will take a close look at the mummies’ teeth. The degree of wear on the teeth helps scientists more precisely estimate a mummy’s age at the time of death. They also will search for evidence of what caused the mummies’ deaths.

Logistically, the scans were complicated. The mummies had to be carefully removed from their display cases, packed, and prepared for transport in custom-built boxes. The team took precise measurements to be sure each mummy would fit into the scanner.

‘These were human beings’

But Bhalla viewed another aspect of the scans as the greatest challenge of the project.

“It was very important for us to remember that these were human beings we were scanning,” he says. “We had to do the scanning in an atmosphere of spiritual and physical respect, and with the help of museum staff who acted as a kind of surrogate family for the mummies, we did that.”

“Mummification was a difficult and expensive process. It’s really very poignant. Each of these people was beloved by someone,” adds Çakmak.

The researchers and other medical center staff volunteered their time, and the School of Medicine and Barnes-Jewish Hospital donated time on the scanner and the computing resources necessary to process the results. The Saint Louis Art Museum paid for transporting the mummies.

The Puritans waged the first ‘War on Christmas’