YALE (US) — The discovery of a new dinosaur extends the family tree of the well-known Triceratops, long considered the king of the horned dinosaurs.

Called Titanoceratops after the Greek myth of the Titans, the new species rivaled Triceratops in size, with an estimated weight of nearly 15,000 pounds and a massive eight-foot-long skull.

Titanoceratops, which lived in the American southwest during the late Cretaceous period around 74 million years ago, is the earliest known triceratopsin, suggesting the group evolved its large size more than five million years earlier than previously thought, according to Nicholas Longrich, the paleontologist at Yale University who made the discovery.

The finding, which will appear in an upcoming issue of the journal Cretaceous Research, helps shed light on the poorly understood origins of these giant horned dinosaurs.

Longrich was searching through scientific papers when he came across a description of a partial skeleton of a dinosaur discovered in New Mexico in 1941. The skeleton went untouched until 1995, when it was finally prepared and identified incorrectly as Pentaceratops, a species common to the area.

When the missing part of its frill—the signature feature of the horned dinosaurs—was reconstructed for display in the Oklahoma Museum of Natural History, it was modeled after Pentaceratops.

“When I looked at the skeleton more closely, I realized it was just too different from the other known Pentaceratops to be a member of the species,” Longrich says, adding that the specimen’s size indicated that it likely weighed about twice as much as adult Pentaceratops.

The new species is very similar to Triceratops, but with a thinner frill, longer nose and slightly bigger horns, says Longrich.

Instead, Longrich believes that Titanoceratops is the ancestor of both Triceratops and Torosaurus, and that the latter two split several millions years after Titanoceratops evolved. “This skeleton is exactly what you would expect their ancestor to look like,” he says.

Titanoceratops was probably only around for about a million years, according to Longrich, while the triceratopsian family existed for a total of about 10 million years and roamed beyond the American southwest into other parts of the country and as far north as Canada.

In order to confirm the discovery beyond any trace of a doubt, Longrich hopes paleontologists will find other fossil skeletons that include intact frills, which would help confirm the differences between Titanoceratops and Pentaceratops.

“There have got to be more of them out there,” Longrich says.

Above: The Titanoceratops rivaled the Triceratops in size, with an estimated weight of nearly 15,000 pounds and a massive eight-foot-long skull.

Below: The missing portions of the Titanoceratops frill, shown in the shaded areas in the illustration on the right, were reconstructed to look like a Pentaceratops skull (left). (Credit: Nicholas Longrich/Yale University) 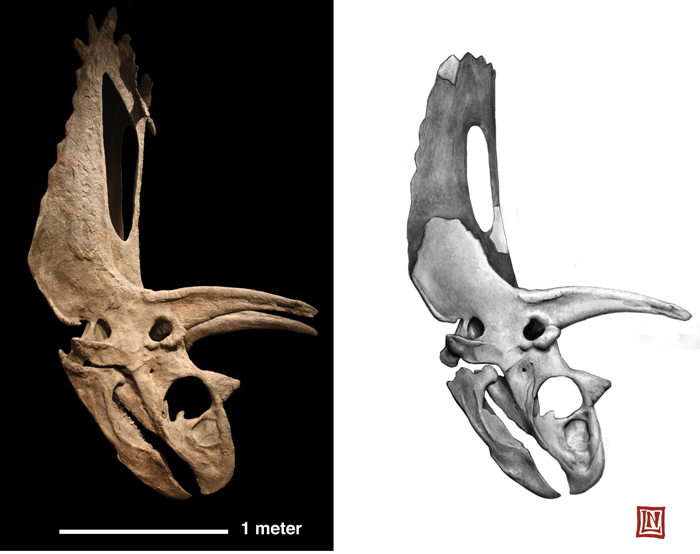