STANFORD (US) — Ancient mosaic art is helping researchers look far back into the history of the dusky grouper to determine how effective efforts to reverse the decline of the fish species have been.

The dusky grouper has been a popular target for Mediterranean fishermen since prehistoric times; their bones have been found in human settlements dating back more than 100,000 years.

Ideally, reserve biologists would compare modern fish to groupers hundreds or thousands of years ago, before the advent of large-scale commercial fishing, but because humans have had an impact on grouper populations in the Mediterranean for so long, that’s not possible.

“When we consider a species recovered, they may still in fact be altered relative to their original baseline,” explains Fiorenza Micheli, professor of marine ecology at Stanford University. 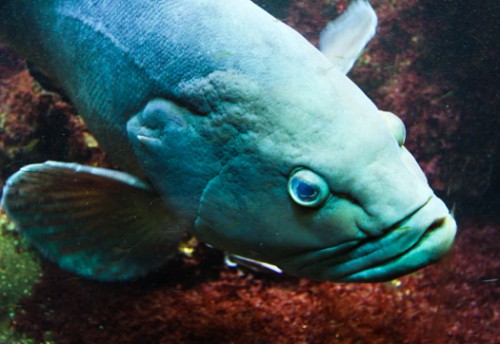 Grouper populations in no-take reserves show signs of returning to ancient numbers and sizes and also seem to be moving into more shallow waters. (Credit: iStockphoto)

Micheli and Paolo Guidetti of the University of Salento in Italy are using ancient mosaic art to look farther back into the grouper’s history than traditional ecological methods allow.

Their paper appears in Frontiers in Ecology and the Environment.

Fish depicted in mosaics were often detailed enough to be recognizable as dusky groupers, but unlike today’s animals, the ones depicted were enormous—in one case, large enough to eat a fisherman whole.

Though possibly a case of artistic license, the depictions imply that groupers were large enough to be considered “sea monsters.” By comparison, groupers in unprotected waters today range from 50-60 centimeters (20-24 inches) in length.

Even more surprising, mosaics show men fishing for groupers with harpoons at the water’s surface, unheard of today. Modern sport fishermen spearfish groupers in deep water. Writings from the time corroborate the Roman view of the grouper as a shallow-water fish. Pliny and Ovid both describe angling for groupers from shore.

“It’s particularly interesting that there are children fishing from the boats,” says Micheli in reference to the Louvre’s Triumph of Neptune and Amphitrite, which depicts cupids harpooning a grouper. “One interpretation would be that it’s so easy to fish them that kids could do it.”

Modern grouper populations in no-take reserves show signs of returning to historical numbers and sizes. Reserve biologists report that populations that haven’t faced being harvested for years begin to move into shallower waters. Groupers in protected areas achieve population abundances five to 10 times greater than those in the rest of the Mediterranean, and can reach sizes of 90-100 centimeters.

Unfortunately, these advances mainly highlight the failed recovery of dusky groupers at large. Because the average size of many grouper populations is smaller than the size of sexual maturity, current conditions appear unsustainable.

“One extreme suggestion would be to place a moratorium on grouper fishing, because they’re not recovering outside of a few small marine reserves,” Micheli says.

“But this would be an unpopular measure.” Sport fishing is a major tourism draw in the Mediterranean, and one of the primary targets is grouper.