BROWN (US) — Individuals and courts deal more harshly with people who actively commit harm than with people who allow harm to occur. This moral distinction may be automatic, according to a new study based on brain scans.

Researchers found that it requires conscious reasoning to decide that active and passive behaviors that are equally harmful are equally wrong. 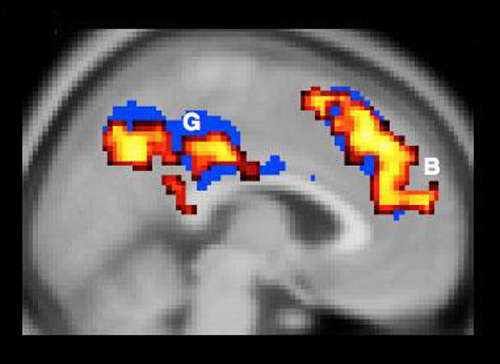 Test subjects who feel that doing active harm is morally the same as allowing harm to occur will show more brain activity. The notion that active harm is worse appears to be automatic, a psychological default requiring less thought. (Credit: Cushman Lab/Brown University)

For example, an overly competitive figure skater in one case loosens the skate blade of a rival, or in another case, notices that the blade is loose and fails to warn anyone. In both cases, the rival skater loses the competition and is seriously injured. Whether it is by acting, or willfully failing to act, the overly competitive skater did the same harm.

“What it looks like is when you see somebody actively harm another person that triggers a strong automatic response,” says Cushman.

“You don’t have to think very deliberatively about it. You just perceive it as morally wrong. When a person allows harm that they could easily prevent, that actually requires more carefully controlled deliberative thinking [to view as wrong].”

In a study published in the journal Social Cognitive and Affective Neuroscience, Cushman and his co-authors presented 35 volunteers with 24 moral dilemmas and lapses like the one involving the figure skaters.

All the while, Cushman and his co-authors, who were at Harvard University at the time, tracked the blood flow in the volunteers’ brains with functional magnetic resonance imaging scans.

Cushman expected to confirm what he had observed in behavioral experiments and published in 2006: that people employed conscious reasoning to arrive at the usual feeling, which is that actively caused harm is morally worse than the passively caused harm.

He assumed that those who saw a moral difference did so by explicit reasoning. Such people should therefore have exhibited greater activity in the dorsolateral prefrontal cortex than those who saw no moral distinction.

But to Cushman’s surprise, the greater levels of DPFC activity lay with those who saw active harm and passive harm as morally the same.

Cushman emphasizes that his research does not suggest which moral judgment is right. But it is notable that our legal system enshrines the belief that active harm is worse than passive harm.

As one example, he cites a 1997 U.S. Supreme Court decision (Vacco v. Quill) in which the court ruled that given explicit permission from a patient, a doctor cannot directly euthanize the patient, such as with an overdose of morphine, but the doctor can follow a patient’s directive to cease life support or other treatment.

In the case, the district court in New York initially ruled the way the Supreme Court ultimately did, but the appeals court in between ruled that euthanasia and ending life support were essentially the same.

Cushman says his new findings may be useful because they describe the mechanisms underlying how they, and perhaps society in general, arrive at moral judgments. Drawing on the metaphor offered by authors Max H. Bazerman and Ann E. Tenbrunsel in their ethics book Blind Spots, he suggests that the extra thought required to judge passive harm as morally wrong might be analogous to a blind spot.

Much as drivers learn to look over their shoulder before changing lanes, he says, people may want to examine how they feel about passive harm. Especially in specific, real-life situations, they may still conclude that active harm is worse, but they’ll at least have compensated for the automatic bias his research suggests is there.

The research was supported by the Arete Initiative and the National Science Foundation.

Ethics of meat: How about going reducetarian?

Survey: Some opposed to abortion will still help others seeking one