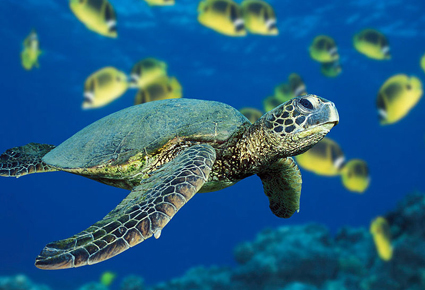 A global data review shows that during the past 20 years millions of sea turtles have been inadvertently snared by methods used in commercial fishing. Effective measures to reduce turtle bycatch include the use of circle hooks and fish bait in longline fisheries, and Turtle Excluder Devices in trawling. Many of the most effective types of gear modifications have been developed by fishermen themselves. View more photos. (Credit: Goncalo Veiga/Wikimedia Commons)

DUKE (US)—The number of sea turtles inadvertently snared by commercial fishing gear over the past 20 years may reach into the millions, according to the first peer-reviewed study to compile sea turtle bycatch data from gillnet, trawl, and longline fisheries worldwide.

The study, which was published in the journal Conservation Letters, analyzed data compiled from peer-reviewed papers, government reports, technical reports, and symposia proceedings published between 1990 and 2008. All data were based on direct onboard observations or interviews with fishermen. The study did not include data from recreational fishing. 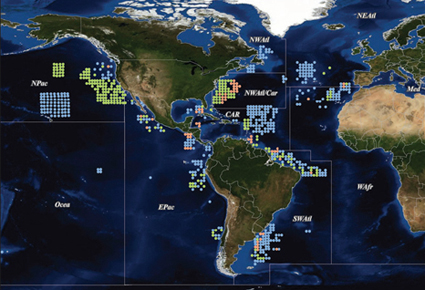 Each colored dot on this map represents an individual fisheries study that was included in this analysis of sea turtle bycatch. (Courtesy: Conservation International)

Six of the world’s seven species of sea turtles are currently listed as vulnerable, endangered, or critically endangered on the IUCN Red List of Threatened Species.

“Direct onboard observations and interviews with fishermen indicate that about 85,000 turtles were caught between 1990 and 2008. But because these reports cover less than one percent of all fleets, with little or no information from small-scale fisheries around the world, we conservatively estimate that the true total is at least two orders of magnitude higher,” says Bryan Wallace, lead author of the new paper.

Wallace is the science advisor for the Sea Turtle Flagship Program at Conservation International and an adjunct assistant professor at Duke University.

When bycatch rates and amounts of observed fishing activity for all three gear types were combined and ranked across regions, four regions emerged as the overall most urgent conservation priorities: the East Pacific, the Mediterranean, the Southwest Atlantic, and the Northwest Atlantic.

“Although our numbers are estimates, they highlight clearly the importance of guidelines for fishing equipment and practices to help reduce these losses,” Wallace says.

Effective measures to reduce turtle bycatch include the use of circle hooks and fish bait in longline fisheries, and Turtle Excluder Devices in trawling. Many of the most effective types of gear modifications, Wallace notes, have been developed by fishermen themselves.

Wallace says the Hawaiian longline fishery and the Australian prawn fishery have significantly reduced bycatch through close working relationships between fishermen and government managers, use of onboard observers, mandatory gear modifications, and innovative technologies.

TurtleWatch, a real-time database that provides daily updates on water temperatures and other conditions indicating where turtles might be found, has guided fishermen to avoid setting their gear in those areas.

Other approaches, such as the creation of marine protected areas and use of catch shares, also reduce bycatch, preserve marine biodiversity and promote healthy fish stocks in some cases, he says.

“Fisheries bycatch is the most acute threat to worldwide sea turtle populations today. Many animals die or are injured as a result of these interactions,” Wallace says. “But our message is that it’s not a lost cause. Managers and fishers have tools they can use to reduce bycatch, preserve marine biodiversity, and promote healthy fish stocks, so that everyone wins, including turtles.”

Coauthors on the new study—all of whom were part of the Project GloBAL team—include researchers from Duke, San Diego State University, and the University of Richmond.