PRINCETON (US) — Synthetic proteins designed in the lab—using genetic sequences never before seen in nature—work much like the real thing to sustain life.

“What we have here are molecular machines that function quite well within a living organism even though they were designed from scratch and expressed from artificial genes,” says Michael Hecht, study leader and chemistry professor at Princeton University. “This tells us that the molecular parts kit for life need not be limited to parts—genes and proteins—hat already exist in nature.”

Details of the work are reported in the journal PLoS One.

Proteins are the workhorses of organisms, produced from instructions encoded into cellular DNA. The identity of any given protein is dictated by a unique sequence of 20 chemicals known as amino acids. If the different amino acids can be viewed as letters of an alphabet, each protein sequence constitutes its own unique “sentence.” 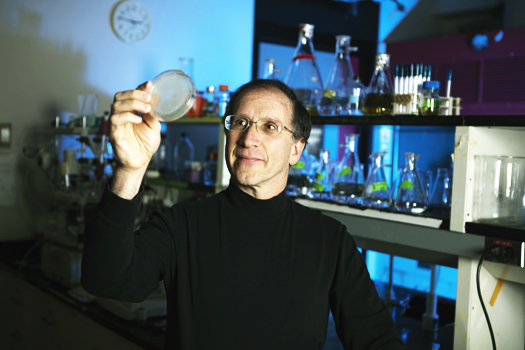 Michael Hecht studies the relationship between biological processes on the molecular scale and processes at work on a larger magnitude. He and his team are interested in learning what processes drive the routine folding of proteins on a basic level—as proteins need to fold in order to function—and why certain key sequences have evolved to be central to existence. (Credit: Brian Wilson, Princeton)

And, if a protein is 100 amino acids long (most proteins are even longer), there are an astronomically large number of possibilities of different protein sequences, Hecht says.

At the heart of his team’s research was to question how there are only about 100,000 different proteins produced in the human body, when there is a potential for so many more. They wondered, are these particular proteins somehow special? Or might others work equally well, even though evolution has not yet had a chance to sample them?

Hecht and his group set about to create artificial proteins encoded by genetic sequences not seen in nature. They produced about 1 million amino acid sequences that were designed to fold into stable three-dimensional structures.

“What I believe is most intriguing about our work is that the information encoded in these artificial genes is completely novel—it does not come from, nor is it significantly related to, information encoded by natural genes, and yet the end result is a living, functional microbe,” says Michael Fisher, a co-author of the paper who earned his Ph.D. at Princeton in 2010 and is now a postdoctoral fellow at the University of California-Berkeley.

“It is perhaps analogous to taking a sentence, coming up with brand new words, testing if any of our new words can take the place of any of the original words in the sentence, and finding that in some cases the sentence retains virtually the same meaning while incorporating brand new words,” adds Fisher

Once the team had created this new library of artificial proteins, they inserted those proteins into various mutant strains of bacteria in which certain natural genes previously had been deleted. The deleted natural genes are required for survival under a given set of conditions, including a limited food supply.

Under these harsh conditions, the mutant strains of bacteria died—unless they acquired a life-sustaining novel protein from Hecht’s collection. This was significant because formation of a bacterial colony under these selective conditions could occur only if a protein in the collection had the capacity to sustain the growth of living cells.

In a series of experiments exploring the role of differing proteins, the scientists showed that several different strains of bacteria that should have died were rescued by novel proteins designed in the laboratory. “These artificial proteins bear no relation to any known biological sequences, yet they sustained life,” Hecht says.

The work, he adds, represents a significant advance in synthetic biology, an emerging area of research in which scientists work to design and fabricate biological components and systems that do not already exist in the natural world. One of the field’s goals is to develop an entirely artificial genome composed of unique patterns of chemicals.

“Our work suggests,” Hecht says, “that the construction of artificial genomes capable of sustaining cell life may be within reach.”

The research was funded by the National Science Foundation.