PURDUE (US) — Eating a diet that includes watermelon juice lowers weight, cholesterol, and arterial plaque, according to a new study with mice.

Published in the Journal of Nutritional Biochemistry, the research suggests that citrulline, a compound found in watermelon, plays a role in cardiovascular health.

“We were interested in citrulline because previous studies showed that it may lower blood pressure,” says Shubin Saha, a vegetable specialist at Purdue University Extension and study co-author. “We didn’t see a lowering of blood pressure, but these other changes are promising.” 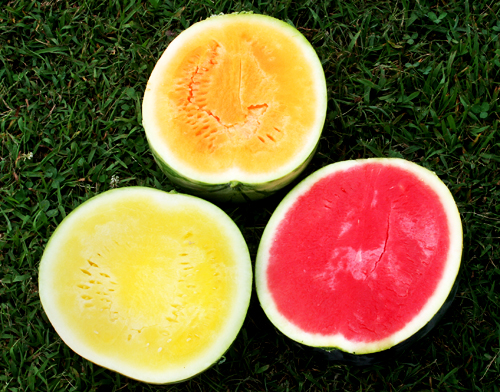 “We know that watermelon is good for health because it contains citrulline,” says Saha. “We don’t know yet at what molecular level it’s working, and that’s the next step.” View larger. (Credit: Shubin Saha/Purdue)

Researchers fed two groups of mice diets high in saturated fat and cholesterol. Half the mice received water containing 2 percent watermelon juice, while the others received the same amount of water supplemented with a solution that matched the carbohydrate content of the watermelon juice.

The mice that consumed watermelon juice gained about 30 percent less weight than the control group and had about 50 percent less LDL cholesterol—the so-called bad cholesterol. The experimental group also had about a 50 percent reduction in plaque in their arteries, as well as elevated levels of citrulline.

“We know that watermelon is good for health because it contains citrulline,” says Sibu Saha, a professor of surgery at the University of Kentucky. “We don’t know yet at what molecular level it’s working, and that’s the next step.”

The scientists are interested in finding a secondary market for watermelons in nutraceuticals, which are foods or food components that also offer health benefits.

About 20 percent of each year’s watermelon crop is wasted either because the fruit is visibly unappealing to consumers or because some growers find it too expensive to pay for harvesting as prices drop during the height of watermelon season.

“We could use the wasted melons that can’t go to market for extracting beneficial compounds,” Shubin Saha says. “Growers are putting energy into these crops, so if we can do something to help them market their additional product, that would be a benefit to the industry and consumers.”

Shubin Saha says he will continue to look at how concentrations of citrulline and lycopene, another compound found in watermelon, affect health and will also test other varieties to determine whether particular watermelons have more health benefits.

The National Institutes of Health, through the University of Kentucky’s Center for Biomedical Excellence In Obesity and Cardiovascular Disease, funded the study. Watermelons were provided by Milne Fruits Products, Inc.