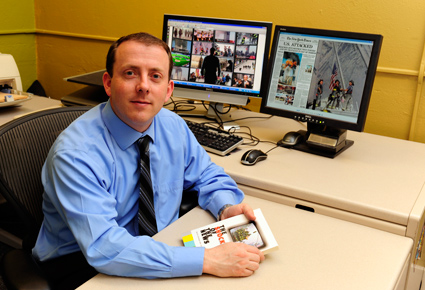 The way the national news media covered the Sept. 11 terrorist attacks gave them iconic meaning and transformed them into public drama, says Brian Monahan. “Making a public drama requires more than just grisly details or human interest. It’s got to be a story with suspense and intrigue and plot developments and characters fully developed. It’s not quite just as voyeuristic as simple human interest would imply. It’s more immersive.” Credit: Bob Elbert, ISU News Service

“If someone says ‘9/11’ in relation to matters of domestic policy, social control, or foreign affairs, the audience can immediately draw on our shared understanding of 9/11 and we know what they are talking about is serious and demands our attention and concern.

“This obviously makes 9/11 a valuable resource for elected officials and other public figures who look to gain support for a particular policy or agenda by creating a linkage to 9/11.”

Monahan examines mainstream media coverage of the attacks as a case study in a new book, The Shock of the News: Media Coverage and the Making of 9/11.

Monahan defines a “public drama” as a particular format used by the news media to organize and present news in the form of highly dramatic and emotional stories that offer a mixture of compelling characters, dynamic plot, captivating settings and other story elements.

He advances a public drama framework as a way to understand why so much contemporary news takes the form of serialized dramas that often bear greater resemblance to popular fiction than detached journalistic inquiry.

“Making a public drama requires more than just grisly details or human interest,” he says. “It’s got to be a story with suspense and intrigue and plot developments and characters fully developed.

“The audience has to care about what is being presented; they need to feel an emotional or psychological connection with the plot or the characters, so it’s not quite just as voyeuristic as simple human interest would imply. It’s more immersive.”

Before he could assess if that’s the way the 9/11 tale was told and retold, Monahan first had to determine how best to analyze the massive media coverage the tragedy received.

“People turn to television first. Eventually, television can only offer so much depth to the coverage—whether it be for time, narrative or format constraints—and so people turn to other sources; in this case, print and online news articles.”

Monahan chose to analyze the first week of television coverage on NBC’s Today show—the highest rated morning show on the most watched news network at the time. He also reviewed the first year’s coverage from The New York Times.

The 9/11 coverage was transformed from initial hard news to a morality-based tale centered on patriotism, victimization, and heroes, Monahan says.

But while news presented as a public drama may make for captivating television or interesting reading, Monahan says it often results in an incomplete understanding of events and issues.

“The emphasis on creating an entertaining story with a titillating plot requires an unfortunate trade-off in which a balanced assessment of the policy implications of an issue, or the causes or consequences of an event often gets cast aside in favor of a non-complex narrative that will appeal to the audience,” he says.

“As a result, the public ends up with an overly simplistic and often skewed understanding of what has happened, why it has happened and what should be done in response.”

Buffalo shooting adds to rise of hate crimes in the US