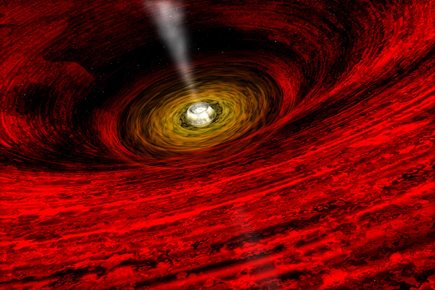 “Until recently, the thinking by many has been that supermassive black holes got their start from the merging of numerous, small black holes in the universe,” says astrophysicist Mitchell Begelman. “This new model of black hole development indicates a possible alternate route to their formation.” Begelman has calculated how supermassive stars might have formed, as well as the masses of their cores.

COLORADO (US)—The first large black holes in the universe likely formed and grew deep inside gigantic, starlike cocoons that smothered their powerful x-ray radiation and prevented surrounding gases from being blown away.

The formation process involved two stages, says Mitchell Begelman, a professor and the chair of University of Colorado at Boulder’s astrophysical and planetary sciences department.

In the new study to be published in Monthly Notices of the Royal Astronomical Society in London, Begelman calculated how supermassive stars might have formed, as well as the masses of their cores. These calculations allowed him to estimate their subsequent size and evolution, including how they ultimately left behind “seed” black holes.

Begelman says the hydrogen-burning supermassive stars would had to have been stabilized by their own rotation or some other form of energy like magnetic fields or turbulence in order to facilitate the speedy growth of black holes at their centers.

“What’s new here is we think we have found a new mechanism to form these giant supermassive stars, which gives us a new way of understanding how big black holes may have formed relatively fast,” adds Begelman.

The main requirement for the formation of supermassive stars is the accumulation of matter at a rate of about one solar mass per year, says Begelman. Because of the tremendous amount of matter consumed by supermassive stars, subsequent seed black holes that formed in their centers may have started out much bigger than ordinary black holes—which are the mass of only a few Earth suns—and subsequently grew much faster.

After the seed black holes formed, the process entered its second stage, which Begelman has dubbed the “quasistar” stage. In this phase, black holes grew rapidly by swallowing matter from the bloated envelope of gas surrounding them, which eventually inflated to a size as large as Earth’s solar system and cooled at the same time, he said.

Once quasistars cooled past a certain point, radiation began escaping at such a high rate that it caused the gas envelope to disperse and left behind black holes up to 10,000 times or more the mass of Earth’s sun, Begelman says. With such a big head start over ordinary black holes, they could have grown into supermassive black holes millions or billions of times the mass of the sun either by gobbling up gas from surrounding galaxies or merging with other black holes in extremely violent galactic collisions.

The quasistar phase was analyzed in a 2008 paper published by Begelman in collaboration with CU colleagues Phil Armitage and Elena Rossi.

“Until recently, the thinking by many has been that supermassive black holes got their start from the merging of numerous, small black holes in the universe,” he says. “This new model of black hole development indicates a possible alternate route to their formation.”

The supermassive black holes created early in the history of the universe may have gone on to produce the phenomenon of quasars—the very bright, energetic centers of distant galaxies that can be a trillion times brighter than our sun. There also is evidence that a supermassive black hole inhabits the center of every massive galaxy today, including our own Milky Way, says Begelman.

Scientists may be able to use NASA’s James Webb Space Telescope, slated for launch in 2013, to look back in time and hunt for the cocoon-like supermassive stars near the edges of the early universe, which would shine brightly in the near infrared portion of the electromagnetic spectrum, adds Begelman.