U. PENNSYLVANIA (US) — Tiny fossils offer clues to a 1700 earthquake in the Pacific Northwest that was strong enough to cause a tsunami as far away as Japan.

The lack of local documentation has made studying this historic event challenging. New work provides a finer-grained portrait of this earthquake and the changes in coastal land level it produced, enabling modelers to better prepare for future events. The research was published in the Journal of Geophysical Research: Solid Earth.

The Cascadia Subduction Zone runs along the Pacific Northwest coast of the United States to Vancouver Island in Canada. This major fault line is capable of producing megathrust earthquakes 9.0 or higher, though, due to a dearth of observations or historical records, this trait was only discovered within the last several decades from geology records.

The 1700 Cascadia event was better documented in Japan than in the Americas. Records of the “orphan tsunami”—so named because its “parent” earthquake was too far away to be felt—gave earth scientists hints that this subduction zone was capable of such massive seismic activity. Geological studies provided information about the earthquake, but many critical details remained lost to history. 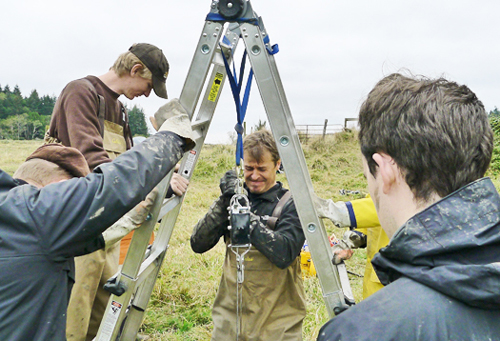 The researchers traveled to various sites along the Cascadia subduction zone, taking core samples from up and down the coast and working with local researchers who donated pre-existing data sets. (Credit: U. Pennsylvania)

“Previous research had determined the timing and the magnitude, but what we didn’t know was how the rupture happened,” says Benjamin Horton, associate professor and director of the Sea Level Research Laboratory in the department of earth and environmental science at the University of Pennsylvania. “Did it rupture in one big long segment, more than a thousand kilometers, or did it rupture in parcels?”

To provide a clearer picture of how the earthquake occurred, Horton and his colleagues applied a technique they have used in assessing historic sea-level rise. The team traveled to various sites along the Cascadia subduction zone, taking core samples from up and down the coast and working with local researchers who donated pre-existing data sets.

The researchers’ targets were microscopic fossils known as foraminifera. Through radiocarbon dating and an analysis of different species’ positions with the cores over time, the researchers were able to piece together a historical picture of the changes in land and sea level along the coastline. The research revealed how much the coast suddenly subsided during the earthquake, which infers how much the tectonic plates moved during the earthquake.

“What we were able to show for the first time is that the rupture of Cascadia was heterogeneous, making it similar to what happened with the recent major earthquakes in Japan, Chile, and Sumatra,” Horton says.

This level of regional detail for land level changes is critical for modeling and disaster planning.

“It’s only when you have that data that you can start to build accurate models of earthquake ruptures and tsunami inundation,” Horton says. “There were areas of the west coast of the United States that were more susceptible to larger coastal subsidence than others.”

The Cascadia subduction zone is of particular interest to geologists and coastal managers because geological evidence points to recurring seismic activity along the fault line, with intervals between 300 and 500 years. With the last major event occurring in 1700, another earthquake could be on the horizon. A better understanding of how such an event might unfold has the potential to save lives.

“The next Cascadia earthquake has the potential to be the biggest natural disaster that the Unites States will have to come to terms with—far bigger than Sandy or even Katrina,” Horton says. “It would happen with very little warning; some areas of Oregon will have less than 20 minutes to evacuate before a large tsunami will inundate the coastline like in Sumatra in 2004 and Japan in 2011.”

The National Science Foundation, the United States Geological Survey, and the University of Victoria funded the research.

Anthropause: Lockdowns sent ‘wave’ of quiet around the world