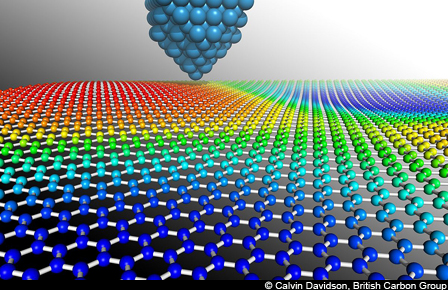 This illustration shows the tip of a scanning tunneling microscope approaching an undulating sheet of perfect graphene. The exotic substance is 10 times stronger than steel and conducts electricity better than any known material at room temperature. Both physicists and nanoscientists are studying graphene and exploring its potential applications. (Credit: Calvin Davidson, British Carbon Group)

VANDERBILT (US)—The hottest, thinnest, toughest new material in physics and nanotechnology is graphene: a remarkably flat molecule made of carbon atoms arranged in hexagonal rings much like molecular chicken wire.

Graphene is 10 times stronger than steel and conducts electricity better than any known material at room temperature. These and graphene’s other exotic properties have attracted the interest of physicists, who want to study them, and nanotechnologists, who want to exploit them to make novel electrical and mechanical devices.

“There are two features that make graphene exceptional,” says Kirill Bolotin, assistant professor of physics and astronomy at Vanderbilt University. “First, its molecular structure is so resistant to defects that researchers have had to hand-make them to study what effects they have. Second, the electrons that carry electrical charge travel much faster and generally behave as if they have far less mass than they do in ordinary metals or superconductors.”

Bolotin, who recently joined Vanderbilt, has been directly involved in the efforts to manufacture and characterize this exotic new material as a postdoctoral fellow in the laboratory of Philip Kim at Columbia University. In a paper published recently in the journal Nature, he and his Columbia colleagues report that they have managed to clean up graphene enough so that it exhibits a bizarre electrical phenomenon called the fractional quantum Hall effect, where the electrons act together to create new particles with electrical charges that are a fraction that of individual electrons. 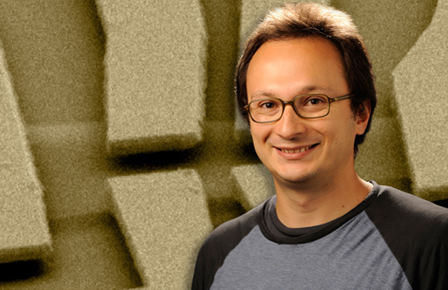 Kirill Bolotin in front of micrograph of graphene sheet suspended above silicon chip.

Although graphene is the first truly two-dimensional crystalline material that has been discovered, over the years scientists have put considerable thought into how two-dimensional gases and solids should behave. They have also succeeded in creating a close approximation to a two-dimensional electron gas by bonding two slightly different semiconductors together.

Electrons are confined to the interface between the two and their motions are restrained to two dimensions. When such a system is cooled down to less than one degree above absolute zero and a strong magnetic field is applied, then the fractional quantum Hall effect appears.

Since scientists figured out how to make graphene five years ago, they have been trying to get it to exhibit this effect with only marginal success. According to Bolotin, the Columbia group figured out that interference from the surface the graphene was sitting on was the problem.

So they applied semiconductor lithography techniques to suspend ultraclean graphene sheets between microscopic posts above the surface of semiconductor chips. When they cooled this configuration down within six degrees of absolute zero and applied a magnetic field, the graphene generated a robust quantum Hall effect as predicted by theory.

The best way to understand this counterintuitive effect is to think of the electrons in graphene as forming a (very thin) sea of charge. When the magnetic field is applied, it generates whirlpools in the electron fluid. Because electrons carry a negative charge, these vortices have a positive charge. They form with fractional charges such as one-third, one-half and two-thirds that of an electron. These positive charge carriers are attracted to and attach to the conduction electrons, creating quasi-particles with fractional charges.

Understanding the electrical properties of graphene is important because, unlike the other materials used by the electronics industry, it remains stable and conductive down to the molecular scale. As a result, when the current silicon technology reaches its fundamental miniaturization limit in coming years, graphene could very well take its place.

Meanwhile, some theoretical physicists are interested in graphene for a totally different reason: It provides a new way to test their theories.

As electrons move through ordinary metals, they interact with the electrical fields produced by the lattice of metal atoms, which push and pull them in a complex fashion. The net result is that the electrons act as if they have a mass different from that of ordinary electrons.

So physicists call this an “effective mass” and consider them to be quasiparticles. When traveling through graphene they also act as quasiparticles, but they behave as if they have a mass of zero. It turns out that graphene quasiparticles, unlike those in other materials, obey the rules of quantum electrodynamics, the same relativistic equations that physicists use to describe the behavior of particles in black holes and high-energy particle accelerators.

As a result, this new material may allow physicists to conduct tabletop experiments that test their theoretical models of some of the most extreme environments in the universe.

The research was supported by grants from Microsoft Project Q, the Defense Advanced Research Project Agency, and the Department of Energy.